Ice hockey is a fast paced sport that is exciting and never a bore for both players and fans. The puck can move down the 85 ft by 200 ft ice surface in the matter of seconds. Five players per team (three forwards and two defensemen) plus a goalie on the rink at a time, a player's job is to work with their teammates to score as many goals as possible, while also protecting their own defensive zone. What's so unique about ice hockey compared to other sports such as soccer, basketball, and football is that a competitor wears skates and glides around the ice, rather than running around a court or field in a typical pair of footwear. It takes time and proper training to become a skilled player. 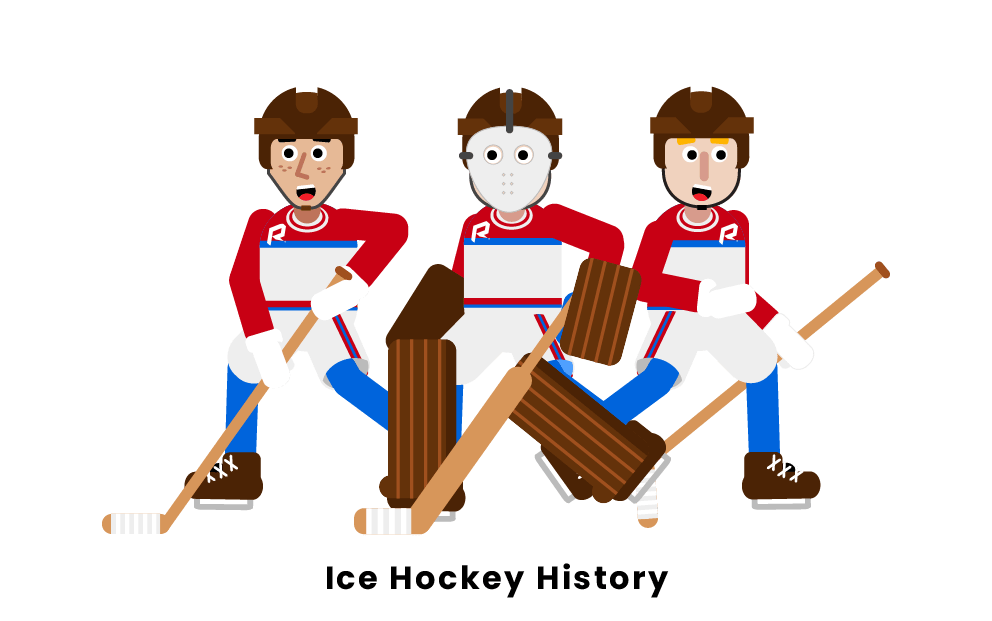 Ice hockey is said to have originated in the British Isles and Nova Scotia Canada. In the 1700s it spread west via British soldiers stationed at the Great Lakes. James Creighton is known as the modern founder of organized hockey. According to the International Ice Hockey Federation, the first hockey game was played in 1875 in Montreal, Canada. It wasn't until 1877 that the rules of hockey were published in the Montreal Gazette. In 1917, the National Hockey League was established. 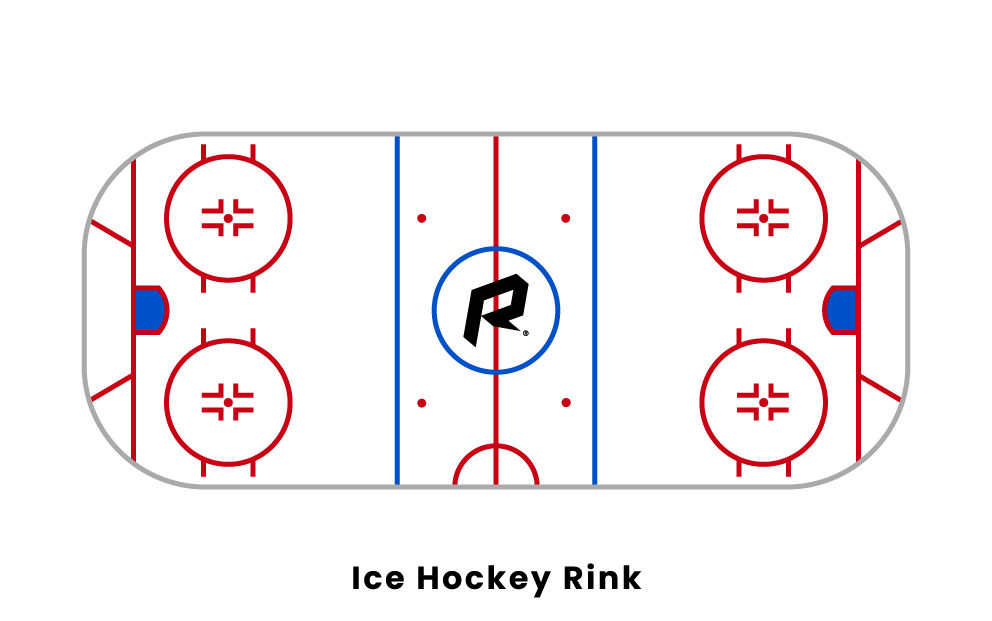 The ice hockey rink is where the sport of hockey is played. An NHL hockey rink is 200ft by 85ft. International hockey rinks are slightly wider at 98.4ft. The rink is surrounded by the boards and safety glass to protect the fans from getting hit by a puck. There are many lines on a hockey rink including the red line, blue line, and goal lines. The nine faceoff spots help dictate where the puck goes to start play. Finally, there are more confusing parts of the hockey rink such as the goalie crease, goalie trapezoid, and referee's crease. 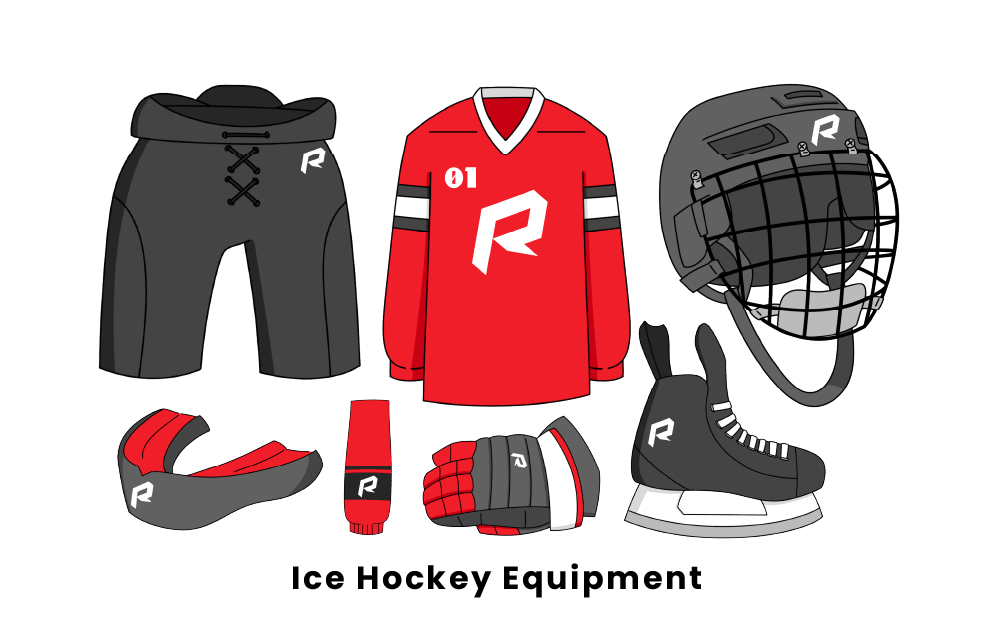 While most sports only require a few pieces of equipment to participate in the game, hockey is different. In order to take part in playing hockey, a player must have personal protection gear to stay safe and be well protected on the rink at all times. Goalies wear specialized equipment with more padding to protect against any shots on goal. 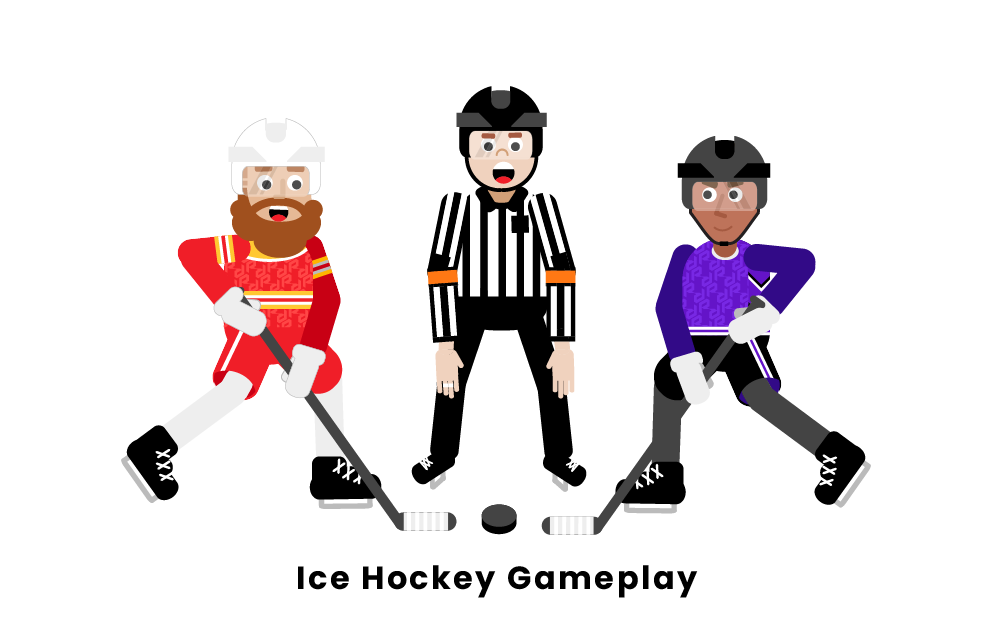 When a whistle is blown after an offside call, icing call, penalty, goal, or whenever a referee or linesman deems necessary, a team will be able to change lines and have different personnel take the ice. However, the most common way to change lines is on the fly. This is when tired players will quickly skate to the bench, while their rested teammates hop onto the ice and take their place. A typical shift lasts after 45 seconds to one minute in length. 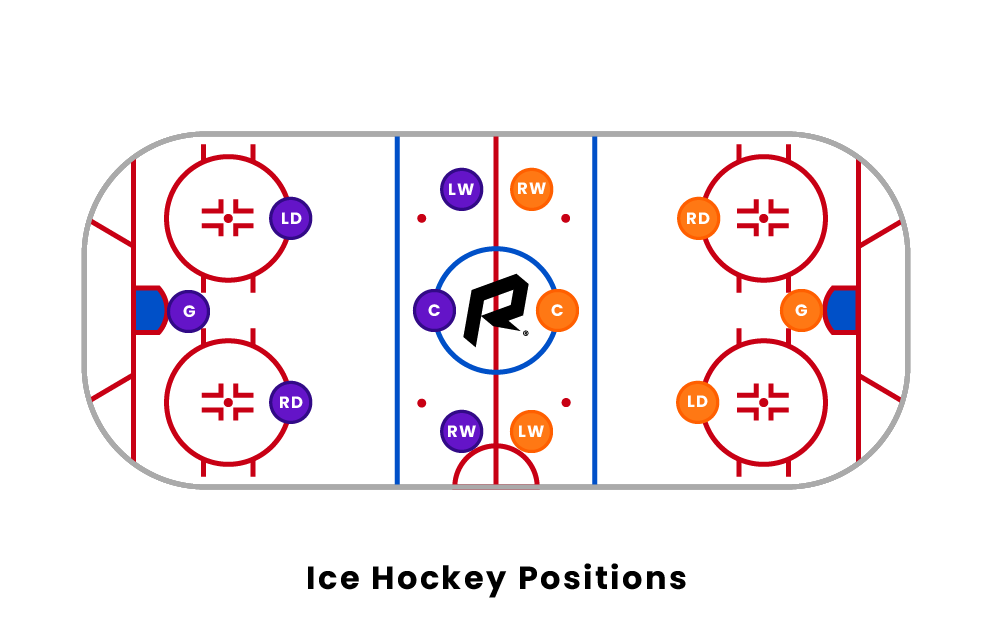 What are the player positions in ice hockey?

These six positions are divided into two main groups called forwards (center and wingers) and defensemen. 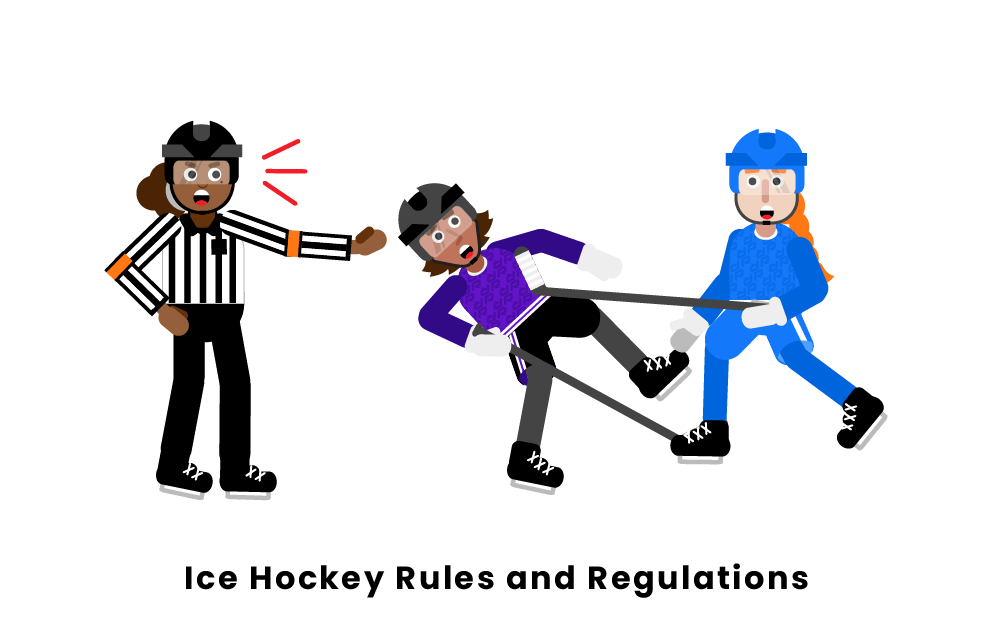 Ice hockey has evolved into a major sport with many rules and regulations. These rules range from the equipment and penalties to fines and suspensions. The rules of hockey may be different depending on the league. However, the core rules remain the same. Here are some of the most important rules in hockey: 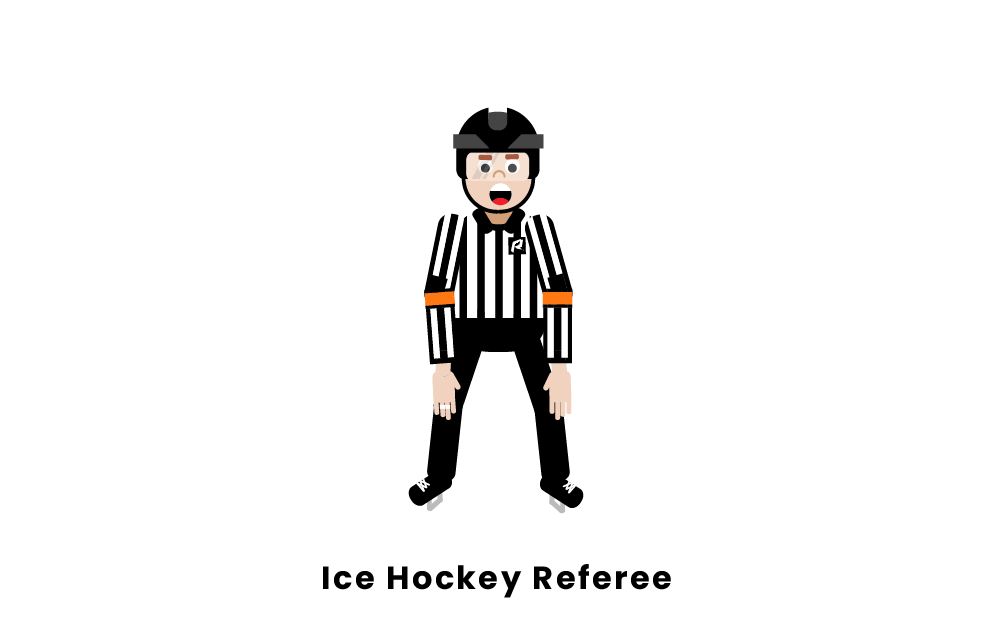 Two linesmen and two referees will be present for a youth or professional hockey game. The job of the linesmen is to call icing and offsides. Linesmen are also responsible for conducting faceoffs on the various faceoff circles around the ice. They break up fights and often call penalties within the neutral zone as well. The goal of a referee is to call penalties and to determine whether a goal is indeed a goal (if there is controversy). To distinguish between the both of them, referees have an orange band on their referee outfit during a game. 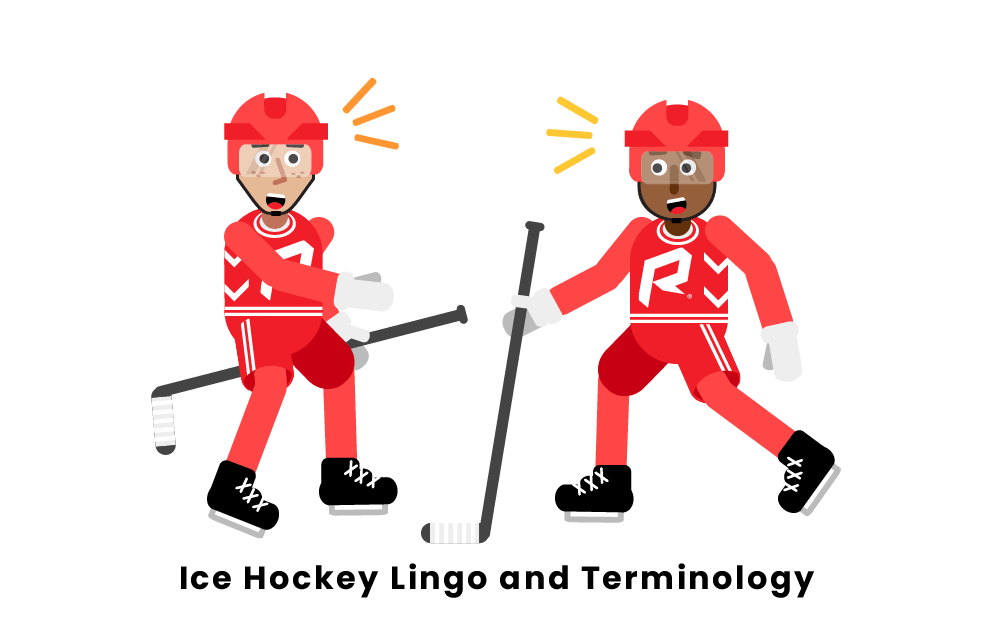 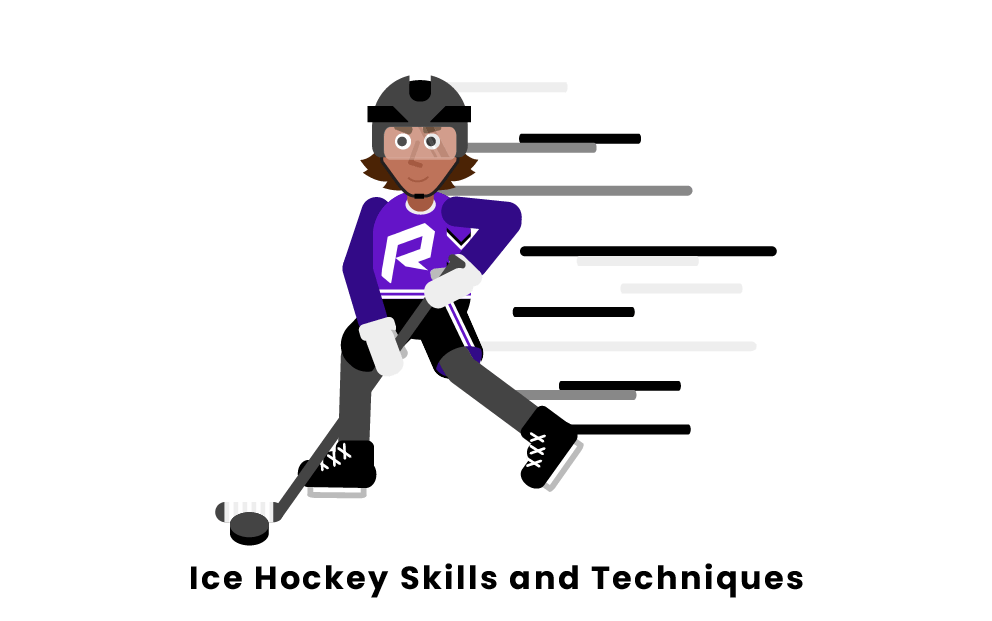 Steps can always be taken by a player to improve their game and to take their skillset to the next level. Various skills and training regiments are not hard to learn, however, it takes hard work and patience until one sees improvement. Below are several ways that a player can ensure they improve their game. 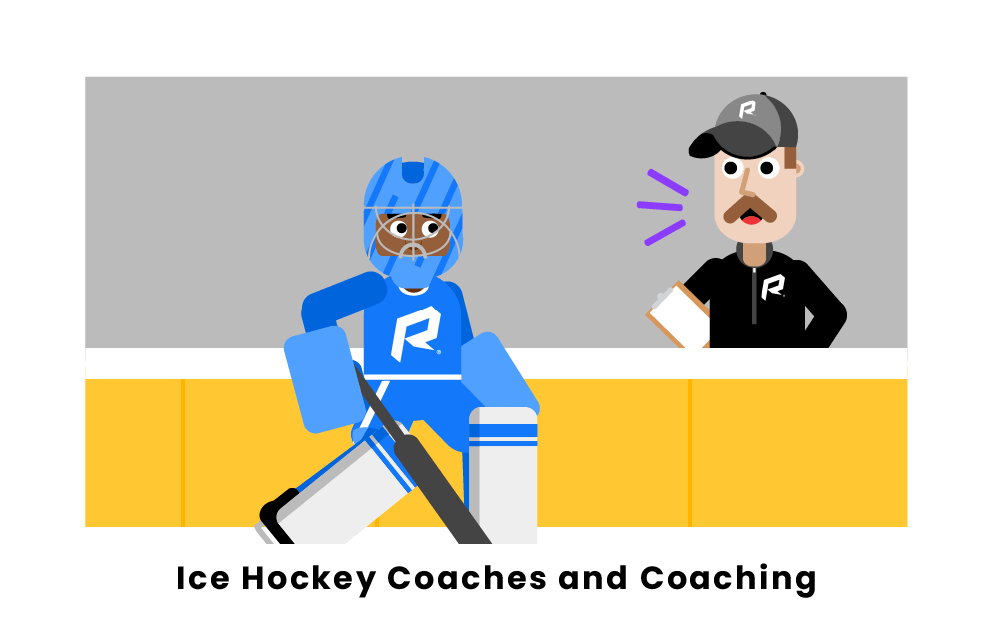 A coach must have a great deal of knowledge on the game of hockey itself. More importantly, however, a coach must know how to treat and respect his/her own players. The great coaches of the game know the strategies that must be implemented for their teams to win and improve game to game. These coaches must also know how to handle feedback and how to work with a front office when it comes to trading and drafting certain players. The 3 coaches below are a few of the premier coaches that currently coach or that have coached in the NHL. 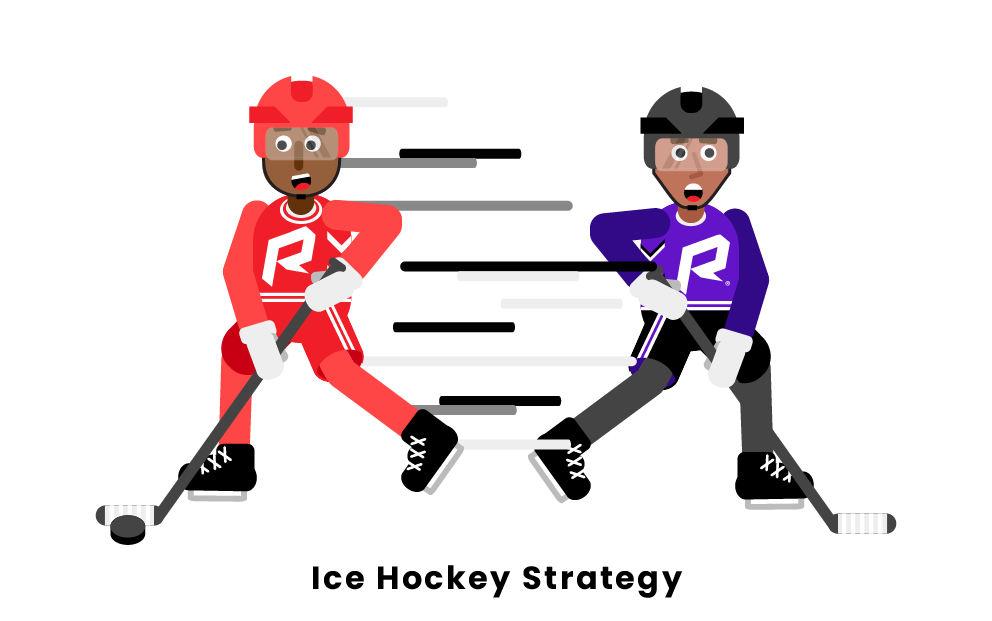 Teams use certain strategies within a game depending on who the opponent is that they are playing. Strategies are often developed and built open during practices throughout the course of a week leading up to gamedays. Strategies help a team feel prepared and in sync on the ice at all times. Players are more likely to be where they are supposed to be and will know where their fellow teammates are positioned as well.

Defensive minded teams often like to sit back in a 1-3-1 or 1-2-2 formation. This means that they only send 1 forward to forecheck (apply pressure on the opposing team), while having the other forwards and defenders sit back in the neutral zone. Teams will often use this strategy if they are winning a game in order to prevent a team from scoring.

Offensive minded teams often run a 2-1-2 or 2-2-1 strategy. This means they send 2 forwards on the forecheck while having another forward and/or defenseman hanging by the blue line just in case there is a loose puck. Teams will often use this strategy if they are losing a game and in need of a goal. 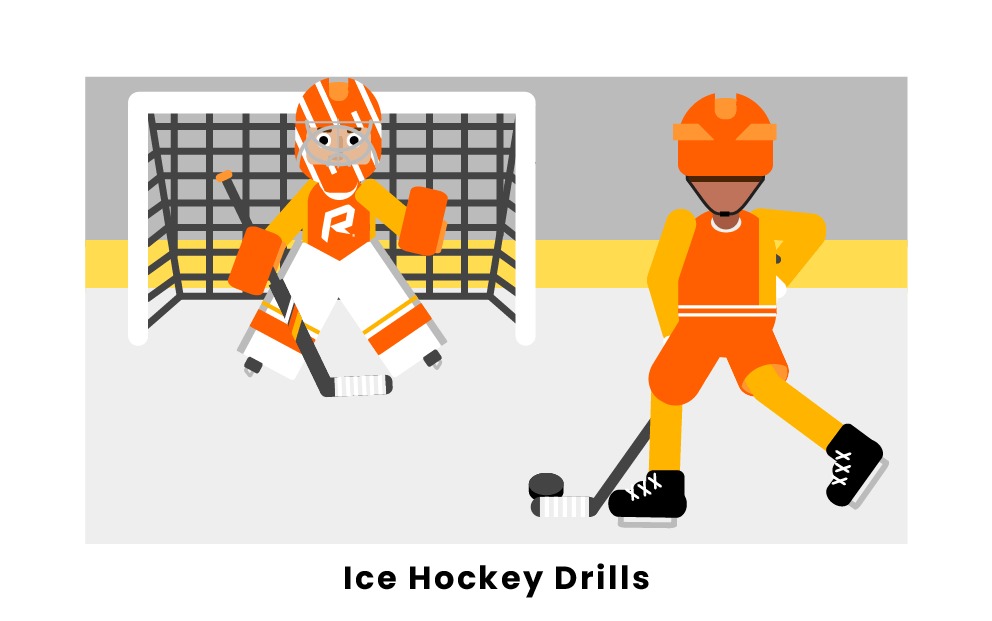 The great thing about hockey drills is the fact that professionals and children work on the same drills in practice. There are hundreds of drills that each help a player or team with various aspects of their game. Common drills include different variations of breakout drills, which is how a team or player is able to move the puck out of their defensive zone into a safe area. Other drills often include a team practicing their forecheck, which is how they will attack the other team when in possession of the puck. 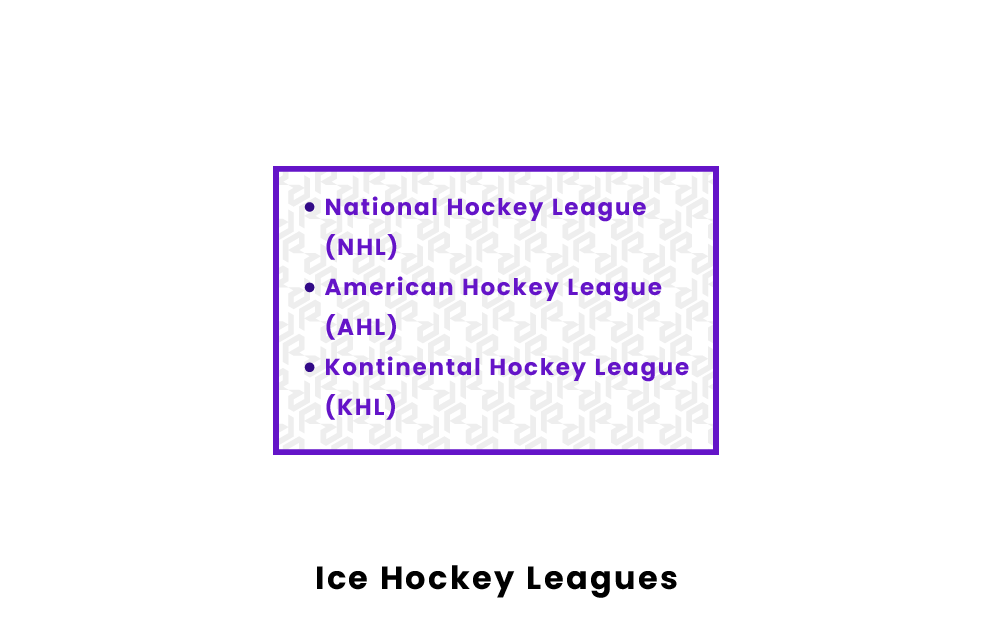 Currently, there are many different levels of competitive hockey that are played all over the world. Most international hockey players aspire to play in the NHL because it has the highest volume of fans, as well as the highest paying contracts. As a result, the NHL is an extremely diverse league that is home to players from dozens of different countries worldwide. Here are some of the more popular hockey leagues:

There are lots of people involved in an ice hockey team other than the players. There is the team owner, head coach, captain, alternate captain, team physicians, and back office personnel.

The NHL is currently comprised of 31 teams with expansion teams being added to the league in the next coming years.

Ice hockey was first introduced to the Winter Olympic games in 1920. In Olympic Hockey, games consist of two teams battling against each other for victory. Up until the 1980 Winter Olympics held in Lake Placid, the Soviet Union was the true powerhouse and won gold medal after gold medal. This was up until Herb Brooks formed the United States "Miracle on Ice Team" that won gold and shocked the world forever. The famous movie, Miracle on Ice, is a true story inspired by these Olympic games. Canada currently holds the most medals for this sport. This is no shock, as the game originated here. 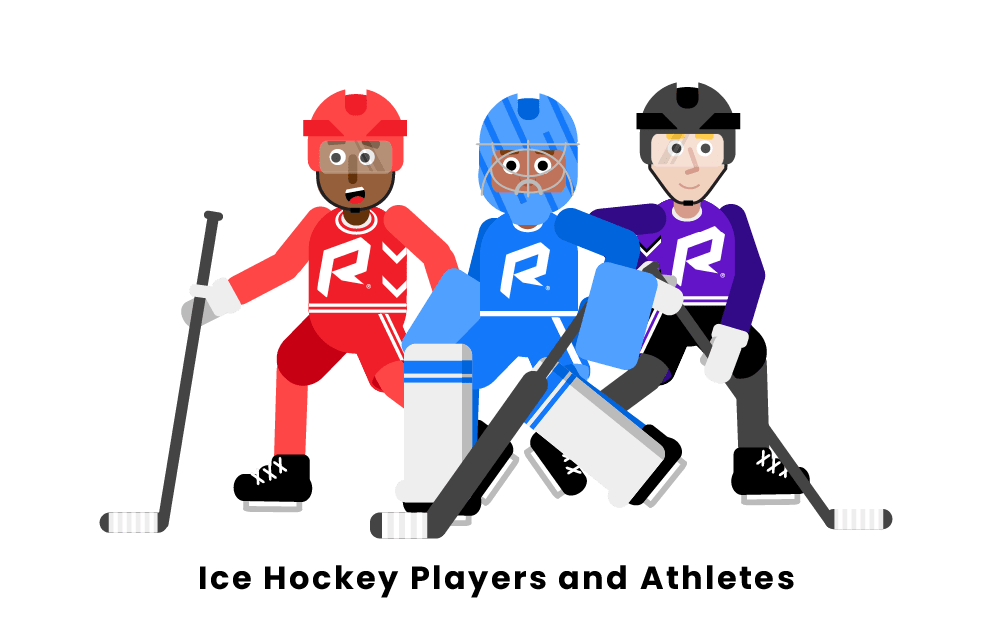 When individuals think of a professional sporting league, a few famous or skilled athletes within the league itself often stick out to them. Below are ten of the most prominent hockey players to ever play the game. Some of these players are known for their great scoring or passing abilities, while others are known for their defensive, skating, or goaltending capabilities. 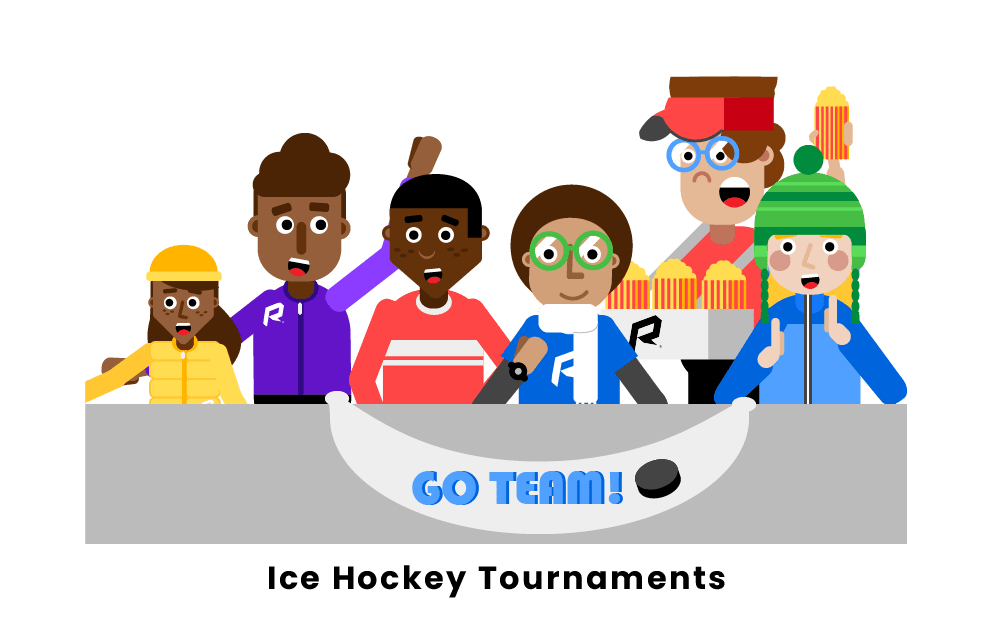 Youth tournaments occur all over the country at various different times throughout the year. The levels vary at each age group. The age groups include Mites (8 and under), Squirts (10 and under), Peewees (12 and under), Bantams (14 and under), Midget Minor (16 and under), and Midget Major (18 and under). After these age groups, players are forced to go onto Collegiate or Juniors hockey. At each age level, however, players can choose to play on teams that vary in how competitive they are depending on the league and players on a specific team. The more A's in the organization, league, or tournament, the better the players are. Competition ranges from B to A to AA, to AAA. Some of the bigger and more well-known tournaments are:

Ice hockey books are often fiction, nonfiction, or novels on how to train made for players to help them improve their game. Some of the stories are based on real-life events, such as The Making of a Miracle, which is based on the United States Miracle Ice Hockey Team at the 1980 Lake Placid Winter Olympics. Other books are made up stories meant to be fun and enjoyable for a reader. Some of the more popular hockey books include: 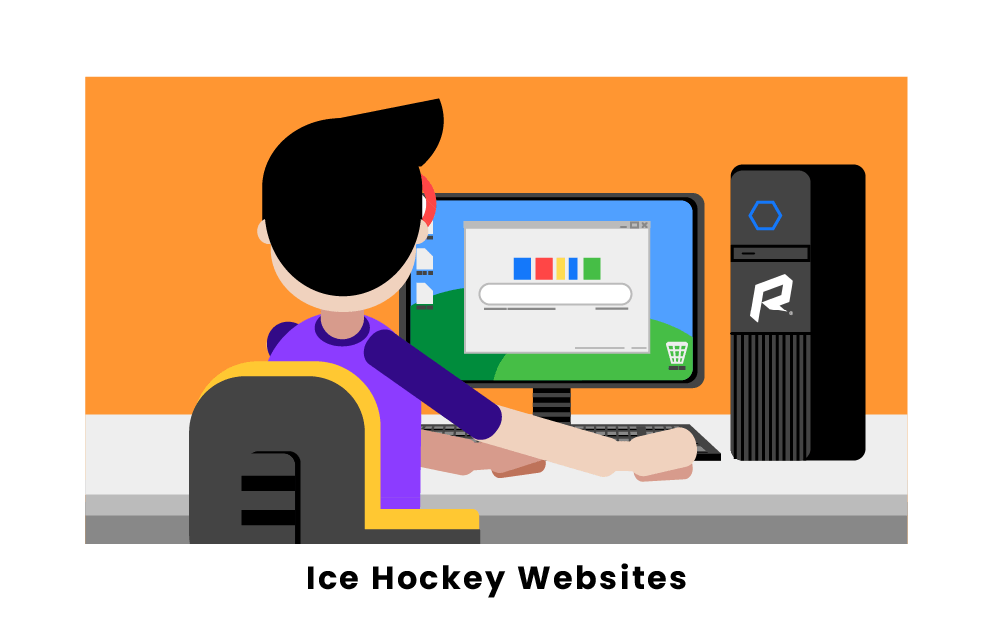 There are many different hockey websites that each have its own special purpose. There are sites made for purchasing equipment, sites to explore youth hockey rankings, sites for various teams and leagues, sites to see an individual player's statistics, and sites for the professional leagues, such as the NHL. Some of these websites include:

What is ice hockey?

Ice hockey is a sport that involves two teams of five skaters and one goalie. The objective is to score the puck in the opposing team's goals. There are three periods of game time in hockey that each last 20 minutes.

What are the positions in ice hockey?

What is icing in ice hockey?

Icing is an infraction where a player hits the puck from one side of the red line to the other side past the goal line without a player on the opposing team touching it.

What does offsides mean in ice hockey?

Offside is an infraction that is called on any player whose team has possession of the puck and is in the attacking zone prior to the puck entering that zone. There are many intricate rules for how offsides is called based on deflections, delayed offsides, and the positioning of a player's skates on the ice.

What are the types of shots in ice hockey?

Is fighting allowed in hockey?

Yes, fighting is allowed in hockey and is often encouraged. However, there are strict rules for fighting and players can not take off their helmets, and when one player falls down onto the ice the fight is over.