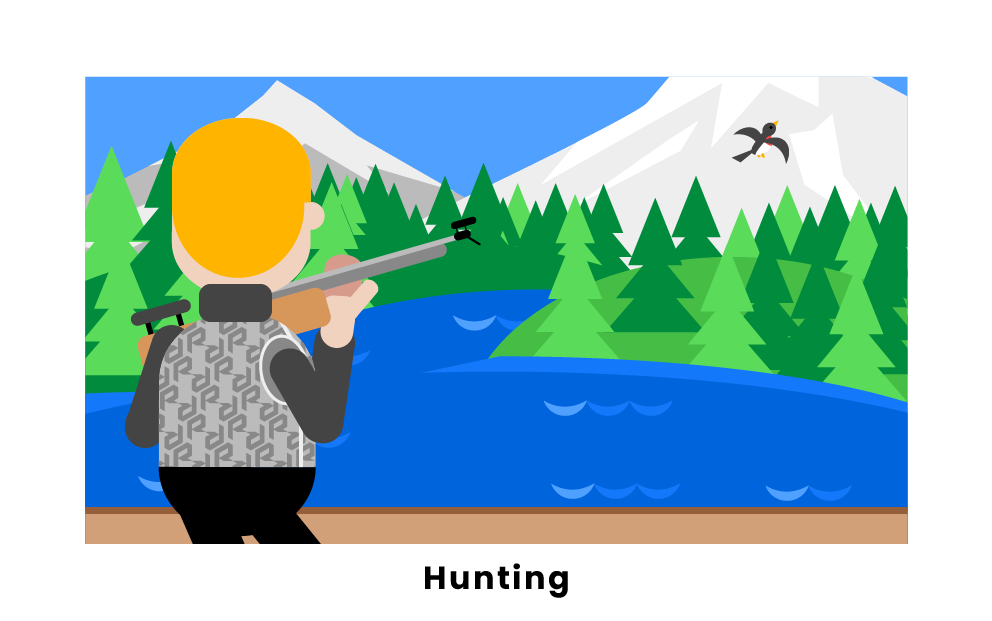 Hunting is both a professional sport and casual hobby done by many people across the globe. In terms of the sport, hunting is usually scored by a point system or how many animals you are able to successfully hunt down. The most common animals that are hunted are deer, elk, moose, and caribou. The gun of choice for most hunters is a rifle, and they carry knives in order to skin animals after killing them. 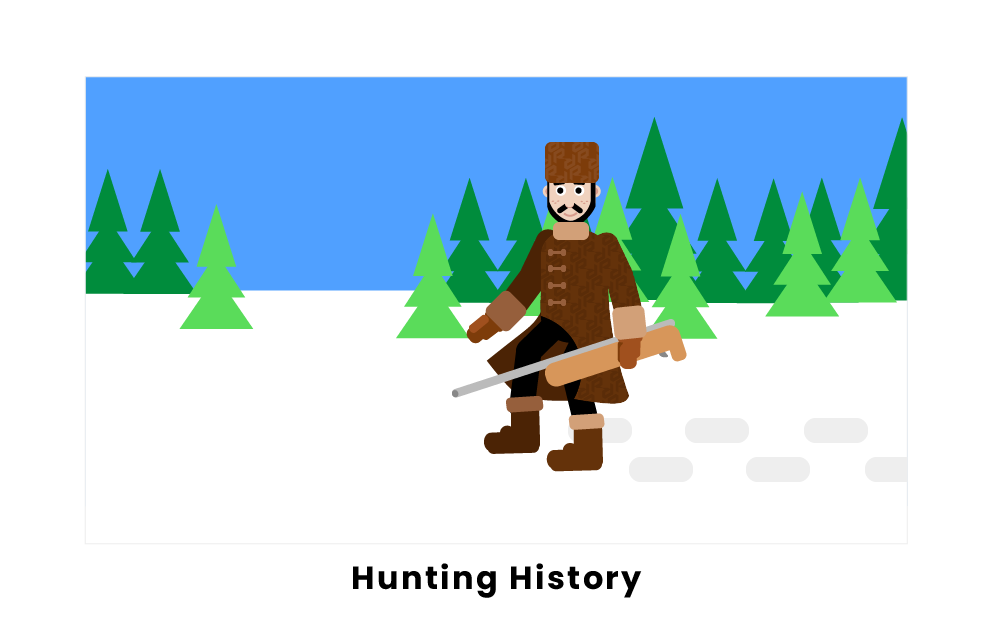 Hunting for sport was normally for rulers and nobles back in ancient times, since they had the most leisure time and wealth. In Egypt, huntsmen were a social class, and the  most common animals hunted were gazelle, antelope, ox, sheep, and the hare. Early hunters used camouflage along with training dogs and even lions to hunt. Guns used for hunting did not appear until around the 16th century. 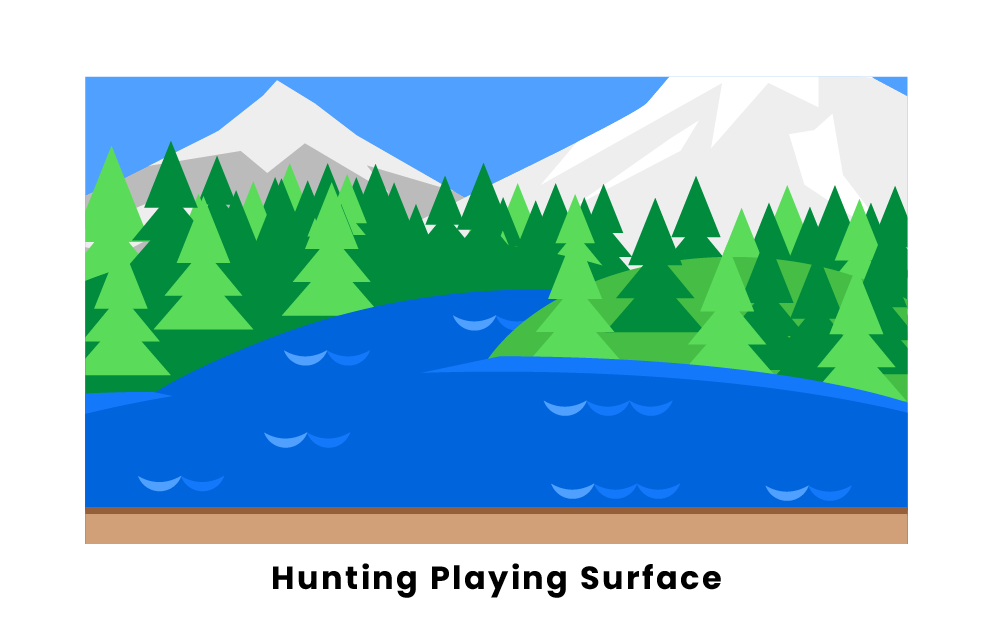 Hunters most commonly hunt in the forest or other wooded areas, since this is the natural habitat of the animals they are trying to capture. Being covered by things such as trees and bushes are helpful to hunters since they do not want to be seen by the animals they are hunting. Camouflage helps, but cover is still needed to stay secluded while searching for prey. Oftentimes wooded areas have trails and spaces designed for hunting, especially in the United States. 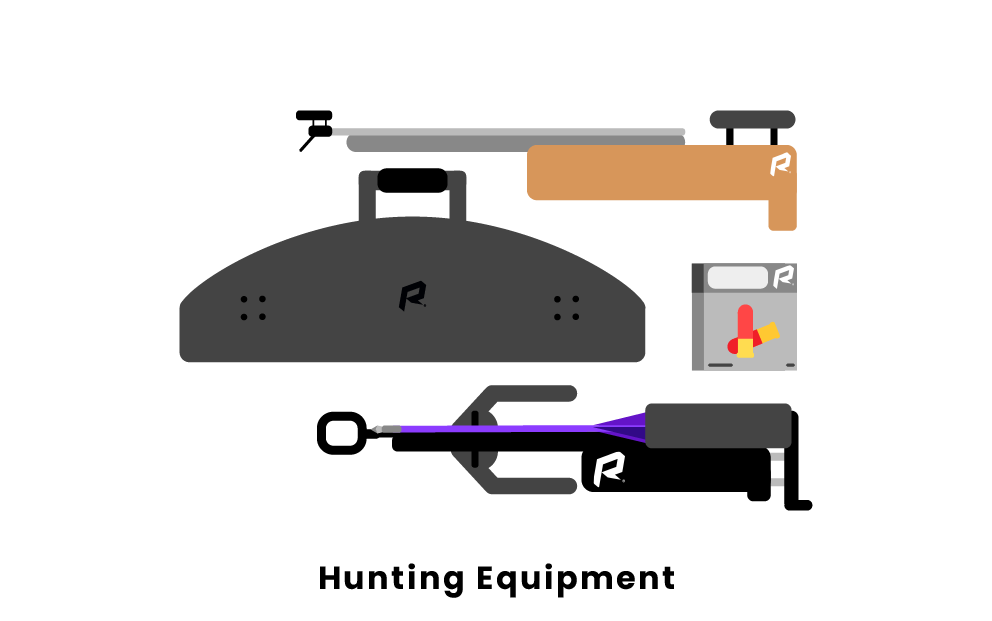 In order to be successful while hunting, there are some essentials. The list below will help you make sure you do not forget anything when visiting your local hunting store and gearing up for a trip to the woods.

Here is the essential Hunting equipment you should have:

The main point of hunting is to gather food and materials from skinning the animals you kill. Some people also hunt for recreational purposes, but most have the intent to kill. Another reason someone would go hunting is to remove a possible threat from the surrounding area. Scientists also take part in hunting, using tranquilizers to get up close and study dangerous animals that roam the woods. 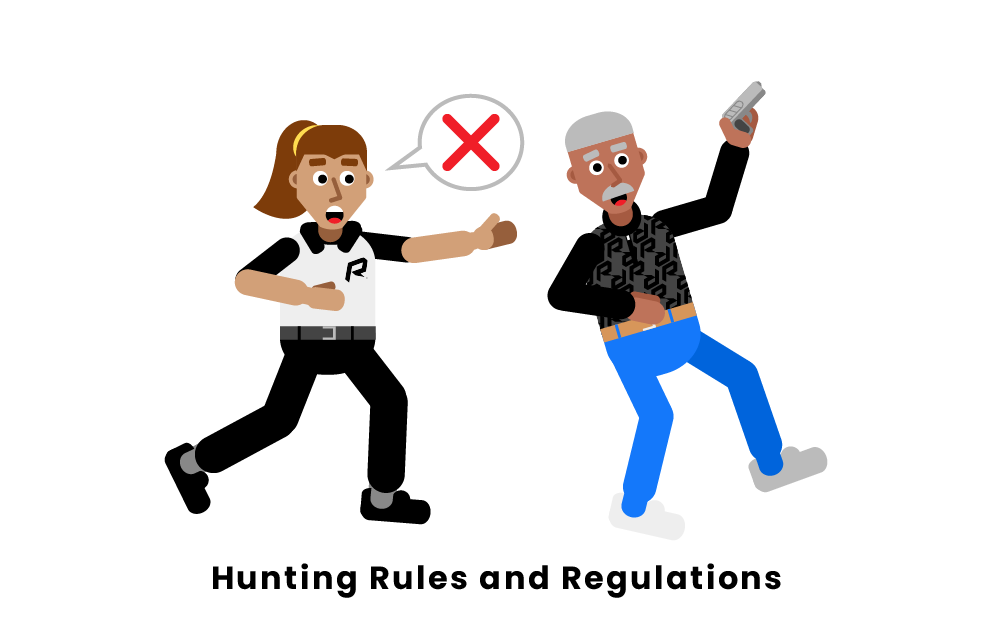 There are many rules in place to stop hunters from illegally killing animals to get an easy dinner or house decoration. Most of the laws below address poaching, which is defined as the illegal capture or killing of animals, usually due to land rights. The rest of the rules are put into place as safety precautions for hunters and possibly others in the area.

Here are the most important hunting rules you should know:

There are many variations of hunting when it comes to attracting animals to your kill zone. The main examples are still hunting, stand hunting, calling, and baiting. Still and stand both require stealth but in different forms. Still hunting is when you infiltrate the habitat of an animal and find it before it sees you. Stand hunting allows animals to come find you while you camp in one location.

Here are the most important hunting strategies you should know: 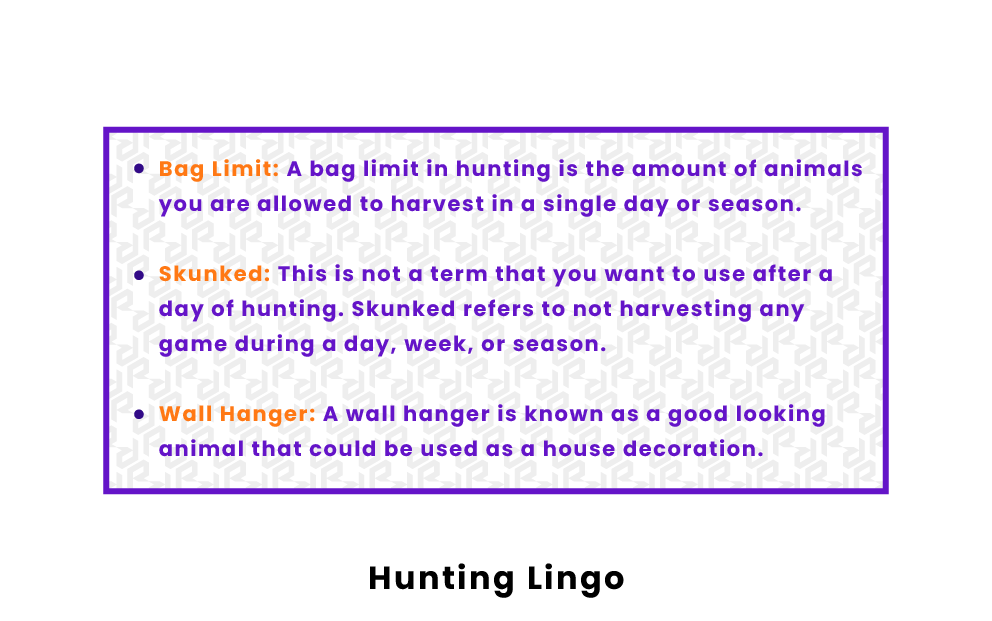 Here is the common lingo and slang in Hunting:

Bag Limit: A bag limit in hunting is the amount of animals you are allowed to harvest in a single day or season. This is a protective measure put in place in order to keep animals from becoming endangered and having to grow up on their own. To continue to have legal hunting, animals must be protected to some degree, or the sport would eliminate species within years.

Skunked: This is not a term that you want to use after a day of hunting. Skunked refers to not harvesting any game during a day, week, or season. Even the best hunters sometimes get skunked, it all comes down to luck. Some days a whole herd may be nearby, and the next, nothing.

Wall Hanger: A wall hanger is known as a good looking animal that could be used as a house decoration. The most common decorations among hunters are deer heads along with stuffed rugs of various animals. Animal fur is very warm and while disturbing to some, makes great rugs for the home. Some hunters choose to preserve their best catches by hanging up the head of the animal on their walls.

Some of the most famous big game hunters were also masters in other fields. Teddy Roosevelt was a President of the United States and Ernest Hemingway was known as one of the best writers of all time. Those who focused solely on hunting like Davy Crockett and Jim Corbett are credited with the foundations of modern hunting. Corbett is known as a fierce and dangerous game hunter, and also helped found India’s first national park.

Here are the most notable hunters you should know:

Hunting competitions are often localized, but one of the bigger events is run by the North American Hunting Competition. They have events for almost every animal that is commonly hunted, such as bears, deer, antelope, elk, and many others. They have held competitions since 2012 but did not have one last year due to the Covid-19 pandemic. They hold about 10 competitions at the national level every year.

What animals are usually hunted?

The most hunted animals include deer, elk, and antelope.

What else do you need besides a gun to hunt?

You should carry a knife and wear camouflage if you plan on hunting big animals.

Do you need a license to hunt?

Yes, you need a license to hunt in whatever state you live in.

What kind of guns are used in hunting?

The most common type of gun used to hunt is a rifle.

Pages Related to What is Hunting?