What Are The Rules of Horseshoes? 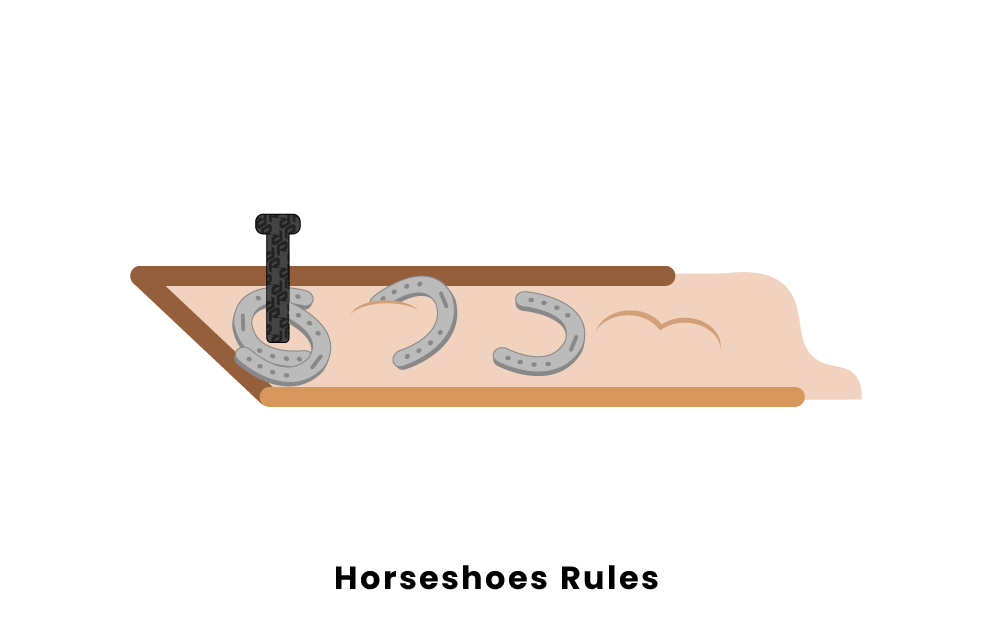 Horseshoes is a popular outdoor game played throughout the United States and Canada. Some horseshoes players take the game very seriously, competing in officially sanctioned tournaments around North America. Maybe you want to give one of America’s greatest backyard games a try. But what are the rules of horseshoes? Keep reading to find out all about the gameplay, scoring, equipment, and fouls of horseshoes.

Regulation games of horseshoes are played between two opposing players or two opposing teams of two. However, friendly backyard games may be played by individuals or teams of any size.

Before the game, a horseshoe flip determines which side will pitch first. “Pitching” is the official term for throwing the horseshoe. Play begins with the player or team who won the flip pitching both of their horseshoes, one at a time, toward the opposing stake. Then the second player or team pitches their two horseshoes, standing by their opponent’s stake and pitching toward their own. Thus all four horseshoes are pitched toward the same stake, from the same pitching position. Each round of both sides pitching their two horseshoes is called an inning. The players pitch toward alternating stakes in alternating innings.

Points are scored based on the position of both sides’ horseshoes at the end of each inning. Getting a horseshoe to land encircling the stake is called a “ringer” and is worth three points. Two ringers are worth six points, which is the maximum possible score per inning. The scores of opposing ringers in an inning cancel each other out. So, if you pitch two ringers and your opponent pitches one ringer, you will receive three points, and your opponent will receive none. Getting a horseshoe to land within six inches of the stake and closer to the stake than either of your opponent’s horseshoes is worth one point.

Play continues until a predetermined number of horseshoes have been pitched or a set winning score has been reached by one of the sides, depending on the type of game or competition. Sanctioned tournaments utilize 40 or 50-horseshoe games. Regulation games are played to a maximum score of 40 or 50 points, whereas friendly games are usually played to a maximum score of 11, 15, or 21. In all formats, the victor must win by a margin of two points, so overtime innings are pitched as necessary until victory by a two-point margin has been achieved.

Although they were originally derived from the horseshoes worn by horses, pitching horseshoes are about twice as large as actual equestrian horseshoes and considerably more streamlined in design. Regulation horseshoes must be no larger than 7.625 inches long by 7.25 inches wide, no thicker than one inch, and may not weigh more than 40 ounces. The maximum width of a horseshoe’s opening is 3.5 inches. All horseshoes used in regulation play must utilize designs that have been previously approved by the National Horseshoe Pitchers Association (NHPA).

The stakes used in horseshoes are made of various types of metal or plastic. They are one inch in diameter and are placed into the ground so that their tops extend between 14 and 15 inches above the pitching platform. The stakes are also placed into the ground at an angle so that they lean three inches from top to bottom, pointing toward the opposite end of the court. This angle helps the horseshoes to stay on the stake, encouraging ringers.

The game of horseshoes is played on a field called a court, measuring 50 feet long by 10 feet wide. The two opposing stakes are placed 40 feet away from each other. At each end of the court is a pitcher’s box.In the middle of the pitcher’s box is the pit, which contains the stake and is where the horseshoes are pitched. The pit is filled with sand or other materials to slow the horseshoes upon impact. On either side of the pit is a pitching platform, where the players stand to pitch. The game of horseshoes can be played indoors or outdoors.

There is only one penalty in horseshoes, which can be assessed for committing several different fouls. The penalty for committing a foul is that the horseshoe thrown in violation will be declared a “foul shoe.” Examples of commonly committed fouls are stepping off of the pitching platform before releasing the horseshoe or causing the horseshoe to hit the backstop, pit frame, or other objects before coming to rest inside the pit. Foul shoes are never scored, and if they have landed in the pit, they are removed before the next horseshoe is thrown. However, if a foul shoe strikes another horseshoe (whether belonging to the offender or their opponent), the shoe that was displaced will be scored where it lands.

How do you score in horseshoes?

What is a foul in horseshoes?

There are two different times a foul, or violation, can occur: when delivering the pitch and when the horseshoe lands in the opposing pit. When pitching a horseshoe, you can commit a foul if you step outside the platform before releasing the horseshoe or if you fail to pitch within 30 seconds. Pitching your two horseshoes in an inning from different pitching platforms or with different hands will also result in a foul. Likewise, you will commit a foul if your horseshoe bounces off the backstop or other object before coming to rest in the pit. The penalty for committing a foul in horseshoes is having the offending horseshoe declared a “foul shoe,” not scored, and removed from play.

Pages Related to What Are The Rules of Horseshoes?