How Does Scoring Work In Horseshoes? 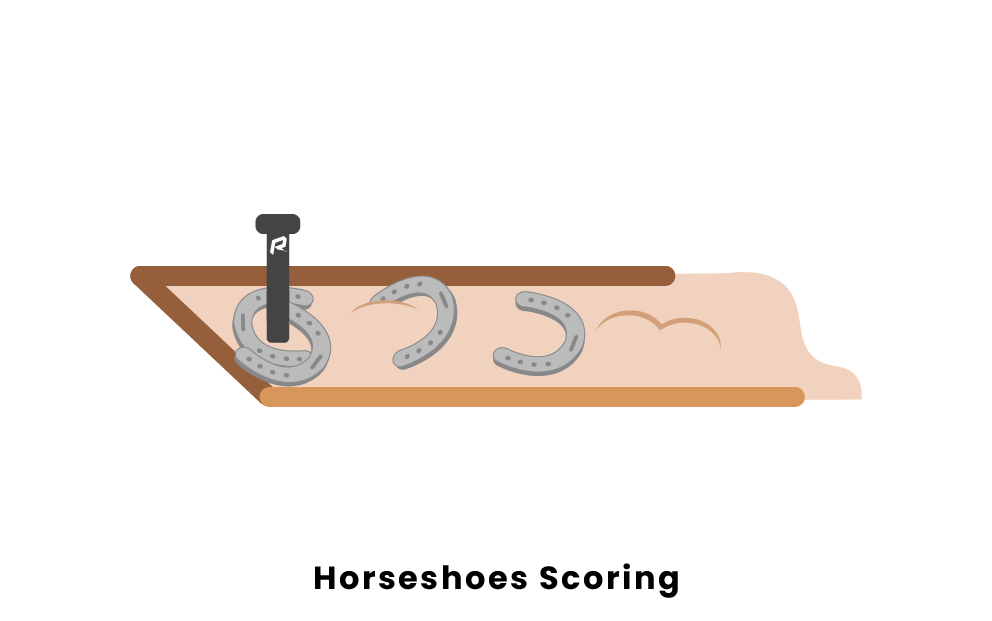 Horseshoes is a classic summertime game that has been played at cookouts and in parks across America for well over a century. Top-level players compete in sanctioned tournaments hosted by the National Horseshoe Pitchers Association (NHPA). Regardless of your skill level, you need to know how scoring works in horseshoes if you want to win. Keep reading for all the answers on how to keep the score straight in your next horseshoes game!

In the game of horseshoes, scoring happens at the end of each inning. An inning is a round in which each player or team takes a turn pitching their two horseshoes at the stake, with the intention of getting the horseshoe around the stake or as close to it as they can. Players score points based on where their horseshoes land in relation to the stake and their opponents’ horseshoes.

The maximum number of points that can be scored in an inning is six by pitching two ringers. If you pitch a ringer plus another shoe in play, which is closer to the stake than either of your opponent’s horseshoes, you will be awarded four points for the inning.

There are two methods of scoring horseshoes: cancellation scoring and count-all scoring. In sanctioned tournaments, the tournament director must announce the scoring method prior to the start of the competition.

All shoes in play for both sides are scored in count-all scoring, and ringers do not cancel. Single points must still be earned by getting a horseshoe closer to the stake than both of your opponent’s shoes. But the scoring of ringers is not affected by your opponent’s ringers as it is in cancellation scoring.

A game of horseshoes cannot end in a tie. If the predetermined number of points or shoes is reached and the score is tied, overtime innings are played two at a time as necessary until a winner can be determined.

What is the scoring system in horseshoes?

The game of horseshoes utilizes a points-based scoring system that calculates points at the end of each inning. An inning is a round of play in which each side takes a turn throwing both of their horseshoes toward the stake. After each inning, horseshoes encircling the stake (called ringers) are scored three points.

In games utilizing count-all scoring, every ringer counts toward your score. But in cancellation scoring, if your opponent pitches a ringer, your ringer will be canceled, and you will not receive a score for it. In either scoring method, you can also score one point by landing a horseshoe within six inches of the stake and closer to it than both of your opponent’s horseshoes.

What is a learner worth in horseshoes?

What score is a horseshoes game played to?

Casual horseshoes games are usually played to a winning score of 11, 15, or 21 points. This game format is called point limit and is also used in regulation play. A regulation point limit game is typically played to a winning score of 40 points. Some sanctioned tournaments use shoe limit games. In shoe limit games, each side gets to pitch a predetermined number of horseshoes (typically 50), after which the side with the highest score is declared the winner. Ties are settled by playing two additional overtime innings, repeating until the tie is broken.

Pages Related to How Does Scoring Work In Horseshoes?