What are the rules of horse racing? 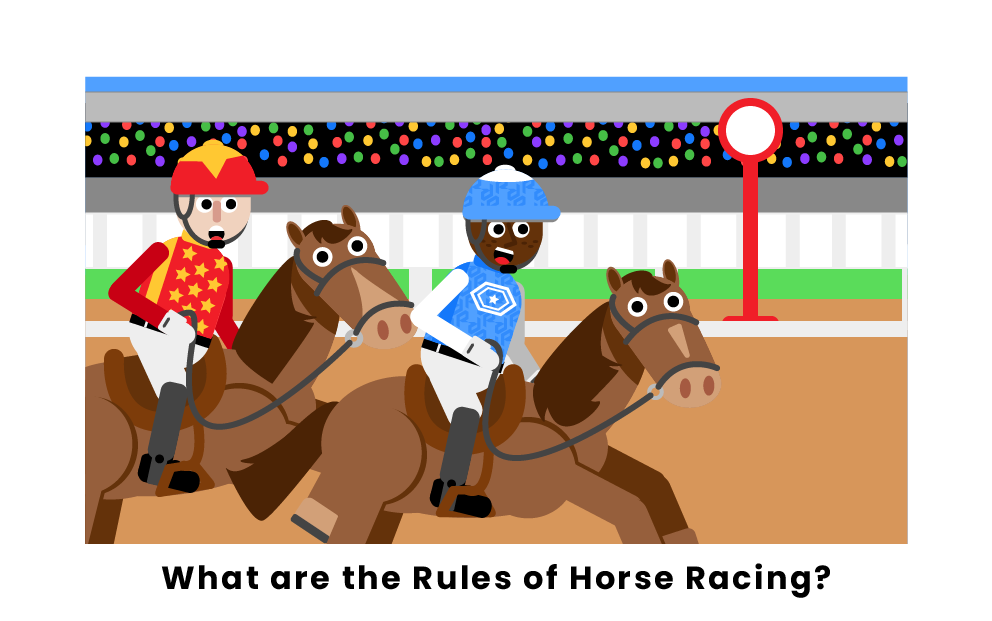 Horse racing is a sport where riders, known as jockeys, race against one another on horses.

The object of the sport is to cross the finish line before the other competitors and win the race. The most common types of horse racing include flat racing and jump racing.

Flat racing is the traditional style of horse racing where horses gallop around a track that is free of any objects such as hurdles or fences. On the other hand, jump racing is when there are hurdles and other objects present on the track that the horses must leap over.

Depending on the venue, horse racing tracks vary in terms of shape and size. In North America, the race tracks typically have an oval shape. The tracks are usually made of up three different surfaces including dirt, grass, and synthetic. For most courses, the outermost track is the main track and is made of dirt or synthetic material. Inside of this track can be from one to three inner tracks made up of grass or turf. On each course, there is a designated starting point and finish line.

The length of the race and track also depends on the venue. For example, the main track in Saratoga Springs is 1 ⅛ miles long (or 9 Furlongs) in circumference while the main track at Belmont Park is 1 ½ miles (12 Furlongs) long in circumference. Since the track at Belmont Park is larger, it provides more options for different length races than the track in Saratoga.

The horse is the most important aspect of the sport because they win the race. Within a race, horses will vary in terms of their speeds and agility so it is essential to choose a horse that has the capabilities to compete effectively and to train it well. The best horse breeds for racing include Thoroughbreds, Arabian Horses, and Quarter Horses. However, different organizations have regulations outlining what type of horses can race.

Jockeys are the people that ride and help train the horses in the race. During the race, jockeys whip the horses to encourage them to go faster. Since using a whip can cause the horse pain and discomfort, many races have rules limiting how often the jockeys can use them.

Unlike many other sports, there is no point scoring system in horse racing. Since the winner is determined by the first horse to cross the finish line, no method of scoring is needed outside of keeping track of who crosses the line first. Even if a horse does not win the race, there are sometimes other awards such as best dressed that is given out to the horse with the best grooming and appearance.

Before a race begins, horses are positioned in stalls or behind a starting gate. This helps to ensure that no horse has an unfair advantage to start the race. After all the horses are set and ready, the gates open and the race begins. In special cases where permission is granted, a horse may begin the race with a flag instead. If a horse begins the race before the others, a false start may be announced. Throughout the race, jockeys help guide their horses along the race track and over any hurdles or fences along the way. If there are hurdles on the track, competing horses must jump over each one.

To win the race, a horse and its rider must cross the finish line before the other competitors. If two horses cross the finish at the same time and the winner cannot be determined, the winner is decided based on a photo finish. This is where the stewards, or officials, closely examine a photo of the finish line to determine which horse broke the plane first. Whichever horse is decided on is pronounced the winner. If it is still impossible to decide a winner, the race is concluded with dead heat rules where the two horses both win the race. In many races, the top three finishers are awarded a sum of prize money.

Throughout a race, it is possible for a horse and its rider to be disqualified. According to the rules, a disqualification will occur if a leading horse or any other horse in a race swerves or is ridden to either side so as to interfere with, intimidate, or impede any other horse or jockey. This happened to a horse named Maximum Security in the 2019 Kentucky Derby. Although the horse won the race initially, it was eventually disqualified for interference.

What happens when a horse is scratched from a race?

When a horse is scratched from a race, it is originally entered but does not end up racing. This can happen if the owner decides not to have the horse race. An owner or trainer may make this decision if they have a better horse for the race or if they want to save the horse for a different race. Another reason a horse may be scratched is if a racetrack veterinarian decides that the horse is not in proper physical condition to run.

When do races take place on the grass?

While many major races take place on the main dirt track, others occur on the inner grass tracks. Since there are three surfaces that horses generally race on (dirt, grass, synthetic), they often develop a preference for one over the others. If a horse tends to race better on a grass track, its owner may enter it in more grass races so that it has a better chance of winning.

What is a claiming race?

A claiming race is a race where horses can be purchased or claimed for an amount decided on before the race. For example, in a $30,000 claiming race, the horses competing are available to be purchased for $30,000 each. These types of races are meant to separate horses into races based on their skill level and worth. It also helps prevent owners from unfairly racing their horses against others with less talent for an easy win.

Is there a limit to horses competing in the Triple Crown races?

Pages Related to What are the rules of horse racing?