Top 6 Best Racehorses of All Time 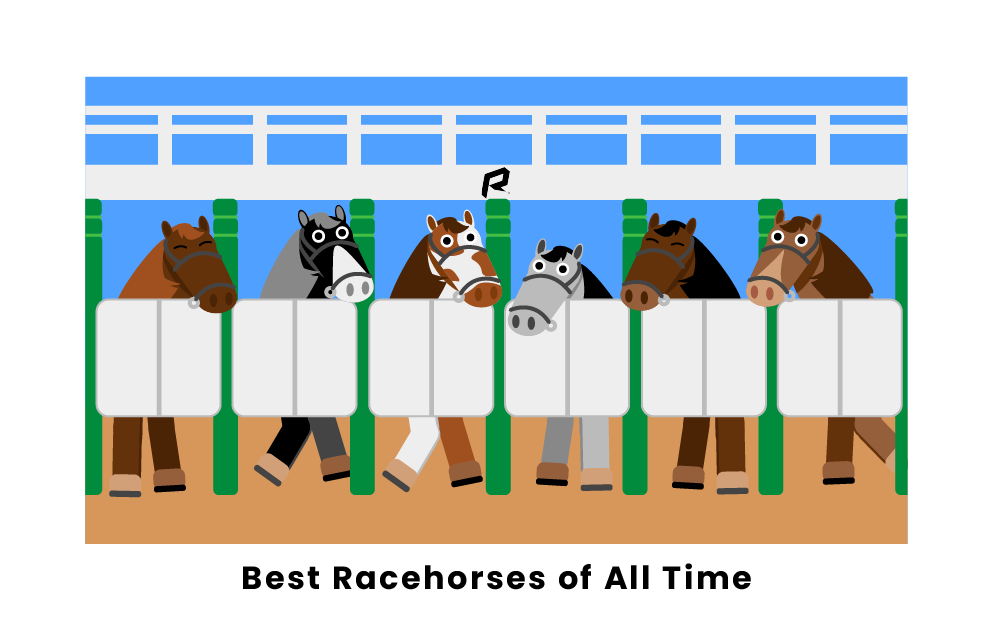 Horse racing is one of the oldest sports on Earth, extending back to the very beginning of known history when humans first began to domesticate horses. Modern horse racing, which takes place on oval tracks, is believed to have developed in the late 1700s and remains a popular sport to this day, with hundreds of races being held around the world each year. In the modern era of horse racing, many unique and notable racehorses have gone down in the history books for their impressive and memorable performances. Here, we look at the top six best racehorses of all time.

Who are the best racehorses of all time?

Without a doubt, one of the most well-known and beloved names in horse racing history is Secretariat. Foaled in 1970, Secretariat was a Thoroughbred racing horse who broke countless records and is widely considered the greatest racing horse of the 20th Century. Two years after his birth, in July of 1972, Secretariat made his racing debut at the Aqueduct Racetrack in New York, showing \great speed and endurance to achieve a fourth-place finish. Secretariat went on to have a massive season in 1972, finishing with seven wins out of his nine races. However, his true potential was revealed in 1973, when Secretariat aimed for the highest honor in horse racing, the Triple Crown.

After a slow start in the Kentucky Derby, Secretariat quickly settled into second place before exploding ahead in the final stretch to win by two-and-a-half lengths, setting a record time in the process. At the Preakness Stakes, Secretariat was the 5-10 favorite but broke late at the start and was in last place for much of the race. However, he accelerated early and went wide to take the lead, winning a second long victory. Secretariat was covered widely in the media before the Belmont Stakes, his final race for the Triple Crown. Getting a good start, Secretariat went neck-and-neck with his biggest challenger, Sham, before finally bursting ahead a mile into the race. Secretariat won the Belmont by an astonishing 31 lengths, setting a record time and becoming America’s ninth Triple Crown winner. In the years after his victory, Secretariat’s performance slowly wound down until his retirement in 1973, after which he became a stud horse, living until 1989 and being inducted into the National Museum of Racing’s Hall of Fame in 1974.

Alongside Secretariat, Man o’ War is often considered one of the greatest racehorses of the 20th Century. Born in 1917, Man o’ War was a horse whose owners had high hopes but also early struggles, as he proved a hard horse to tame. Nevertheless, after being broken, Man o’ War displayed incredible speed, winning nine of his first ten races, his only loss coming at the Sanford Memorial in Saratoga, a race that was famously known as the “Man o’ War Upset.” In 1920, Man o’ War continued his winning streak, successfully capturing all 11 races he started in, though he did not race in the Kentucky Derby, as his owner disliked the race.

Man o’ War’s stunning performances in 1920 led him to earn the nickname “Big Red,” and soon, it was widely believed that only one other horse could challenge Man o’ War, that being Sir Barton, the Canadian Triple Crown champion of 1919. After intense pressure, the owners of the two horses agreed to race them against each other in what later became known as “the race of the century.” The race, in which Sir Barton carried 126 pounds and Man o’ War 120, was held at Kenilworth Park in Windsor, Ontario, and Man o’ War won by seven lengths. After the famous race, Man o’ War retired. Though he did not race any longer, many of his offspring became famous racers, including his son, War Admiral, who won the Triple Crown in 1937, and his grandson, Seabiscuit, who was a huge money-winner. Man o’ War was named to the National Museum of Racing’s Hall of Fame in 1957, ten years after his death in 1947.

Yet another one-of-a-kind horse, Kelso was born in 1957 and is notable for his fame because none of his 63 races were part of the Triple Crown circuit. He began his career in September of 1959 with a win at Atlantic City and raced twice more that year, finishing second both times. After switching trainers, Kelso’s performance improved rapidly, and he won his debut race of 1960 by ten lengths and his second race by 12. After racing in the Arlington Classic and finishing twelfth, Kelso came back into the spotlight by winning six straight races, leading to his naming as Horse of the Year, the first of five straight times he would win the honor from 1960 to 1964. Between those years, Kelso racked up astonishing win streaks, often carrying over 130 pounds and still winning important races at the age of eight. At age 9, Kelso’s final race resulted in a leg fracture that sadly ended his career, though he had earned a record number of wins in the process: 39 victories in 63 starts, which was only surpassed in 1979. In 1967, Kelso earned his spot in the National Museum of Racing’s Hall of Fame. Kelso died on October 16, 1983, one day after his final public appearance at Belmont Park.

The tenth winner of the American Triple Crown, succeeding Secretariat, Seattle Slew was born in 1974 and was of Secretariat’s stock on his father’s side. Though Seattle Slew was well-built physically in his first year, many horse racing experts were uncertain how well he would perform. He was rejected at the prestigious Keeland sale, being forced to enter the lesser-priced Fasig-Tipton sale, where he was purchased by two novice owners, Karen and Mickey Taylor, and their partners, Jim and Sally Hill. Under their ownership, Seattle Slew made his debut in September of 1976, winning his first race at Belmont Park by five lengths, even though he had started in last. After winning his second race by three-and-a-half lengths, he was entered into the Champagne Stakes, a prestigious race, which he won easily by nearly ten lengths. Seattle Slew became an immediate favorite for the following year’s Triple Crown, which he prepared for by winning two preparatory races, completing a six-race undefeated winning streak that made him the 1-2 favorite in the Kentucky Derby. At the Derby, Seattle Slew had a rocky start, but his seasoned jockey managed to calm him down and slowly advance down the track, quickly challenging the lead horse, For The Moment. Seattle Slew took the lead with a quarter-mile to go, winning the race.

Two weeks later at the Preakness Stakes, Seattle Slew was neck-and-neck with the second-place horse for most of the race but won by one-and-a-half lengths. At the Belmont Stakes, a muddy track made the race slow, but Seattle Slew took a quick lead, retaining it for the entire race and winning it, as well as the Triple Crown. In 1978, Seattle Slew suffered a setback in the form of a virus that nearly killed him, but recovered and was able to race, still securing tremendous victories. He retired later that year and became a stud horse, being inducted into the National Museum of Racing’s Hall of Fame in 1981. Seattle Slew died in 2002, on the 25th anniversary of his win at the Kentucky Derby.

The only living horse on our list, Zenyatta is also the only female racehorse on our top six list. Born in 2004, Zenyatta made her racing debut at Hollywood Park on November 22, 2007, finishing first, and beginning an undefeated streak of 19 races. In her career, she has broken the record for the largest number of consecutive Grade 1 racing victories, with 13 wins, and also broke the all-time record for Grade 1 stakes wins by a filly or mare. Her 14th race, which occurred on November 7, 2009, was perhaps the most notable, as Zenyatta became the first-ever female horse to win the Breeders’ Cup Classic, as well as the first horse to ever win two different Breeders’ Cup races.

Her 20th and final race, a second Breeders’ Cup Classic, occurred on November 6, 2010, at Churchill Downs. There, Zenyatta came in second place but lost by only a nose-length. Nevertheless, she was named the 2010 Horse of the Year and still currently holds the all-time earnings record for a North American filly or mare, as well as the all-time record for Breeders’ Cup earnings. Zenyatta retired in 2010 and has since become a breeding horse, giving birth to five horses: Cozmic One, Ziconic, Z Princess, Zellda, and Zilkha. She was inducted into the National Museum of Racing’s Hall of Fame in 2016.

The final racehorse on our list, Citation was foaled in 1945 and became the eighth winner of the American Triple Crown, as well as the first racehorse to ever win $1 million. Citation debuted in 1947, racing at the Havre de Grace track in Maryland and winning by one length. Citation then won his next four races, including breaking a record in a five-furlong sprint race at Arlington Park, Illinois, and winning the Elementary Stakes at Washington Park, Illinois. After a loss in his sixth race of 1947, Citation won two more races on his way to being named the best two-year-old horse of that year. In the following year, 1948, Citation began impressively, winning four early races before losing in his fifth, but then rebounding once again to win the Chesapeake Stakes and the Derby Trial Stakes, leading him to be a contender in the Kentucky Derby.

On a sloppy track, Citation was initially behind when his stablemate, Coaltown, took a six-length lead, but he closed the gap and managed to win by three-and-a-half lengths. Citation entered the Preakness Stakes as the 1-10 favorite, facing another sloppy track, which slowed him down but did not prevent his victory. In the final Triple Crown Race, the Belmont Stakes, Citation stumbled early, but managed to recover by the far turn, finishing the race eight lengths ahead of the other horses to win the Triple Crown. He remained unbeaten the rest of that year, ending 1948 with 19 victories in 20 races. He sat out racing in the following year due to an osselet in his left foreleg but returned in 1950, winning his 16th consecutive race, but then suffering a series of close losses.

Citation went back-and-forth with wins and losses throughout 1951, after which he was finally retired with a record of 32 wins in 45 starts. Citation was inducted into the National Museum of Racing’s Hall of Fame in 1959 and died in 1970.

Who is the best racehorse of all time?

The title of best racehorse of all time is often given to Secretariat, the famous ninth winner of the American Triple Crown. Secretariat boasted a stellar 16-3-1 record in his racing career and earned a total of $1,316,808. His record 31-length win at the Belmont Stakes in 1973 remains the largest win in any Triple Crown event, and his popularity even led to a 2010 film chronicling his career.

Which racehorse holds the record for the longest undefeated streak?

The racehorse with the longest undefeated streak in world history is Camarero, a Puerto Rican racehorse from the 1950s, who raced 75 times and won 73 of those races. This incredible record included the world record longest undefeated streak of 56 consecutive victories, which led to the naming of the Hipódromo Camarero Racetrack in his honor. Camarero’s record is followed by Kincsem, a female Hungarian racehorse of the 1870s who won 54 consecutive races.

Who is the fastest racehorse of all time?

Many widely-recognized racehorses, such as Secretariat, Man o’ War, and Citation, set time records during their careers. However, the Guinness Book of World Records currently holds the fastest racehorse of all time to be Winning Brew, a female racehorse born in 2004, who set the world record for the fastest speed of a racehorse over two furlongs in 2006, at the Penn National Race Course in Pennsylvania. Winning Brew ran the quarter-mile length in 20.57 seconds, reaching speeds of 70.76 kilometers per hour in order to achieve the official world record.

Pages Related to Top 6 Best Racehorses of All Time