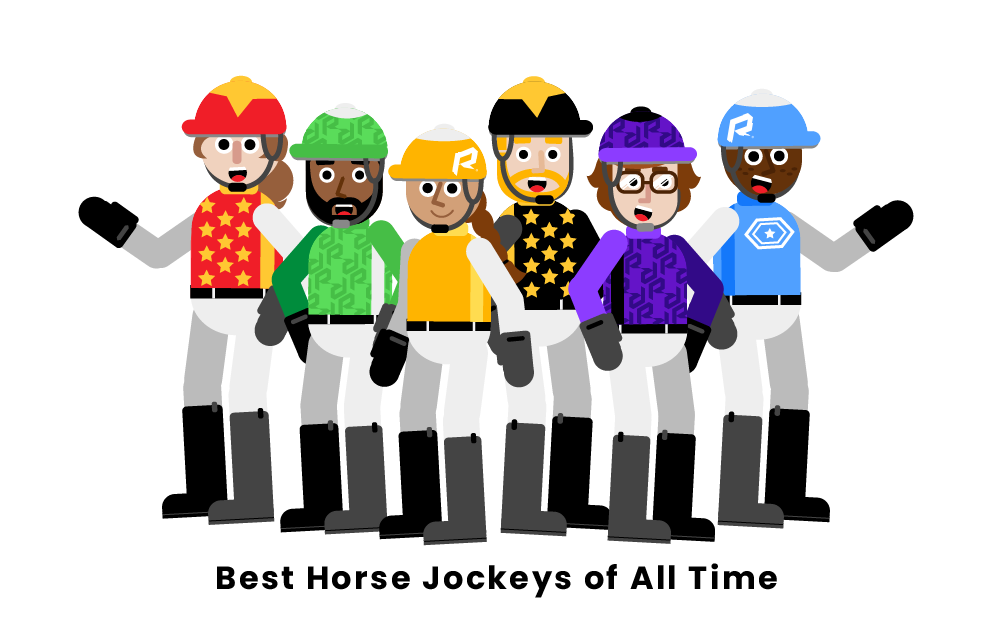 The sport of horse racing is dangerous, thrilling, and incredibly fast. The sport originated in 4500 BC and continues to be a significant part of many cultures today. In order to be a successful jockey, one must have a precise technique that allows the horse to run as fast as possible. Read on to learn about the top six best horse jockeys of all time.

Who are the best horse jockeys of all time?

Bill Shoemaker is one of the most well-regarded horse racing jockeys of all time and is known for his gentle touch on the reins. He completed his first professional race as a jockey in 1949, when he was just eighteen years old. Over the duration of his four decades-long career, he won 11 Triple Crown races. Overall, he competed in 40,350 races, and ten separate times in his career, he was the American jockey who won the highest sum of money in a season. His small stature (4 feet, 11 inches tall) gave him an advantage in the horseracing industry. Shoemaker retired from the sport in 1990.

Lester Pigott is an English jockey who had a well-decorated career starting from 12 years of age when he ran his first race. Pigott holds the record for most English Classic races won during a jockey career with 30. In 1970, he rode the horse, Nijinsky, to win the English Triple Crown. Although Pigott had a successful career, he was frequently banned from racing and even imprisoned for tax evasion. Pigott retired from his jockey career in 1985, then came out of his retirement five years later to jockey again, and even won the 2,000 Guineas Stakes.

Mike Smith, also known as “Big Money Mike,” is an American jockey who continues to have a flourishing career. His more than 5,000 career victories, including a Triple Crown victory on Justify in 2018, have earned him over $336 million in purse winnings. Smith started racing horses when he was just 11 years old and dropped out of high school to pursue his jockey career. Today, he has participated in well over 30,000 races. He also holds the record for most Breeder’s Cup race wins (27 total) in jockey history.

John Velazquez is a famous Puerto Rican jockey still in the midst of his career, known for his record-breaking career earnings. He was the first jockey to surpass $300 million purse winnings. Velazquez started his jockey career in Puerto Rico, then moved to New York in 1990 to begin racing in the United States. Out of his 35,121 career races, he has had 6,384 victories. Since 2000, Velazquez has consistently ranked in the top ten jockeys by earnings and the top 100 jockeys in wins per season. He is the chairman of the Jockey’s Guild board and serves as a board member on the Permanently Disabled Jockeys Fund. In 2007, jockeys voted for him to receive the George Woolf Memorial Jockey Award.

Laffit Pincay is another Hall of Fame jockey who at one point had the highest career winnings in flat racing (horse racing on flat land with no obstacles or jumps). His career consisted of over 9,000 race victories out of the 48,486 races he competed in. Pincay grew up in Panama and learned to ride by watching his father racehorses. Once Pincay began to ride, horseman Fred Hooper sponsored his jockey career, and Pincay was able to race in the United States. Throughout his career, Pincay has received numerous awards and achievements for his sportsmanship and talent as a jockey.

Tony McCoy, also known as AP McCoy, is an active Irish jump jockey who currently has over 4,000 career victories. Unlike the other jockeys on this list, McCoy competes in races where horses have to jump over obstacles. He began working with horses when he was 13 years old, then began his professional career at 17 years old. Throughout his career, McCoy has continuously broken records in jump racing by securing high amounts of career wins in seasons on horses. One of the most notable moments in his career is when he won the 2010 Grand National race on Don’t Push It.

Who is the best horse jockey of all time?

Bill Shoemaker, who still holds the record as the jockey with the 3rd most career victories, is the best horse jockey of all time. His jockey career spanned for more than forty years, and during that time, he won awards for highest earnings in a season as well as the most victories in a season. Shoemaker also won 11 Triple Crown races and was the oldest jockey to win the Kentucky Derby.

Which horse jockey has won the most Kentucky Derby's of all time?

Which horse jockey has won the most classics?

George Arcaro holds the record for the most American Classic race victories, along with his record for the most Kentucky Derby victories. In eighteen years, Arcaro, also known as “The Master,” led horses to win Classic races 17 times. Currently, he is also the only jockey to ever win the Triple Crown twice. Arcaro was known to be a smart and aggressive jockey, and his talent led him to become the highest-earning jockey in six different years during his career.

Pages Related to Top 6 Best Horse Jockeys of All Time