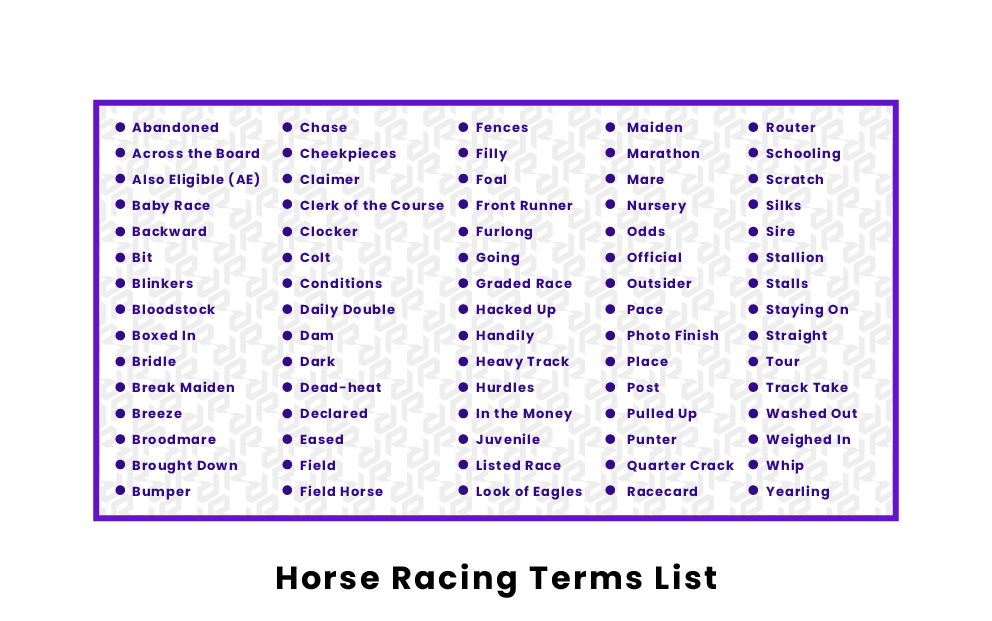 Horse Racing is a sport watched on TV all around the world. It has lots of terms and definitions used to describe betting, racing, and horses. Below is a list of glossary terms to know if you are spectating or participating in horse racing.

Abandoned: This is the status of a race when it is closed, typically from bad weather.

Across the Board: Refers to a bet on one horse winning a race, place, and show.

Also Eligible (AE): Also Eligible refers to horses that are allowed on the field to run the race only if another horse is scratched.

Baby Race: A baby race is typically raced early in the season and is for juvenile horses.

Backward: The term backward is used to describe a horse that is not fully developed or fit for racing.

Bit: A bit refers to a bar that sits in a horse’s mouth and is attached to the bridle. Typically the bar is made out of stainless steel.

Blinkers: Blinkers refers to headgear that is fitted to a horse. This type of headgear limits a horse's field of vision. They are used to help horses focus during racing.

Boxed In: A term used to describe when a horse is unable to get a clear run during a race due to other racers being too close.

Bridle: A bridle is a part of the track that goes over the horse’s head where the bit and the reins are also attached.

Break Maiden: Break Maiden refers to either a horse or rider that wins their first race.

Breeze: Breeze is a term that refers to a horse that easily runs a workout without any encouragement from their rider.

Broodmare: A female horse that is kept for the purposes of producing a foal.

Brought Down: This refers to a horse falling due to another horse.

Bumper: A bumper is a course that runs over two miles without any obstacles. It is used to give horses the racing experience before they begin to race with hurdles and fences. A bumper is also known as a National Hunt Flat race.

Chase: A race where horses run over fences.

Cheekpieces: A type of headgear that has sheepskin on one side of the bridle. Just like blinkers, it is used to help horses focus during races.

Claimer: Claimer refers to a jockey that takes weight off of the horse due to their inexperience in races. A jockey’s claim is reduced for each win they have in a race.

Clocker: A clocker is someone that times the workouts or races of a horse.

Colt: A colt is a young male horse that is currently racing and is four years old or younger.

Conditions: Conditions refers to the circumstance for a race. This includes the surface, distance, purse, and eligibility.

Daily Double: A daily double is when a player picks the winner of two races with a single ticket.

Dam: The mother of a horse.

Dark: Dark refers to a day where a track doesn’t have a race occuring.

Dead-heat: A dead-heat refers to two or more horses that finish at the same time, but the judge of the race is unable to determine the winner. The prize of the race is then split between the horses.

Declared: This refers to a trainer that alerts the racing authorities that they want to use their horse in a race. This typically occurs 24 to 48 hours before a race.

Eased: Eased refers to a horse that stops before finishing the race.

Field: Field refers to the amount of horses competing in a race.

Field Horse: A field horse is when a horse is a part of a team of multiple horses in a race. The horses are considered to be a single betting unit.

Fences: Fences are an obstacle used for chase races. There are several types of fencing. These include a plain fence, an open-ditch, and a water jump.

Filly: A filly is a female horse younger than four years old.

Foal: A foal is a horse that is younger than 1 year old.

Front Runner: A front runner is a horse that is in the lead during a race.

Furlong: A furlong is the measurement of distance used for horse racing. It is equivalent to an eighth of a mile.

Graded Race: A graded race is the highest quality race. This includes Grade and Group 1 races.

Hacked Up: Hacked up is a term used to describe a horse that has easily won.

Handily: Handily refers to a workout where a jockey does not use a whip, but instead strongly enforces the horse.

Heavy Track: A heavy track is a race course that is made of grass and has a lot of water on it.

Hurdles: Hurdles are a type of obstacle used in a hurdle race. They are similar to fences, but are smaller. A hurdle is also known as a flight.

In the Money: In the Money is a phrase used to describe a horse that came in either first, second, or third. The phrase is used for betting purposes.

Juvenile: A horse that is two years old.

Listed Race: A listed race is a type of race that is right below Grade 3 and Group 3 races.

Look of Eagles: Look of eagles is a term used to describe a horse that looks confident.

Maiden: A horse that hasn’t won a race yet.

Marathon: A race that is longer than 1¼ miles.

Mare: A female horse that is five years or older.

Nursery: A Nursery is a race for horses that are two years old.

Odds: Odds refers to the chance that a horse will have to win a race.

Outsider: An outsider is a horse with minimal chances of winning the race they are competing in.

Pace: Refers to the speed of a horse throughout the race.

Photo Finish: A photo finish is a picture taken of the winner of a race when they won. A photo finish is typically taken in case the race ends in a dead heat, as it helps to make the decision of which horse has won.

Place: Refers to a horse that finishes a race in second.

Pulled Up: Pulled up refers to a jockey stopping their horse during a race.

Punter: A punter refers to someone that bets on the outcome of a race.

Quarter Crack: A quarter crack is when a horse’s hoof is injured.

Racecard: A racecard is an information card that gives information about the race day. It states what times the races are and the horses competing in each race.

Router: A router is a horse that does a good job of running long distance races.

Schooling: Schooling refers to a horse that is still being trained and is still learning.

Scratch: Scratch refers to a horse that has to withdraw from a race.

Sire: The father of a horse.

Stallion: A male horse that is used for breeding purposes.

Stalls: Stalls refers to a box where horses begin Flat races in.

Staying On: Staying on is a phrase that is used to describe a horse that finished strongly at the end of the race.

Washed out: Washed out refers to a horse that is nervous and sweating.

Straight: Straight refers to a bet being placed on one specific horse to win a race.

Tour: Tour is a term used to describe someone that is selling information on a horse that is competing in a race.

Track Take: A track take refers to money that is deducted from the pool for revenue and tax purposes.

Weighed In: Weighed in refers to weighting a jockey before and after a race. This happens because a horse that competes in a race has to carry a specific amount of weight.

Whip: A whip is an instrument that is used by jockeys that helps with keeping them under control and focused.

Yearling: A yearling is a horse that is between one and two years old.