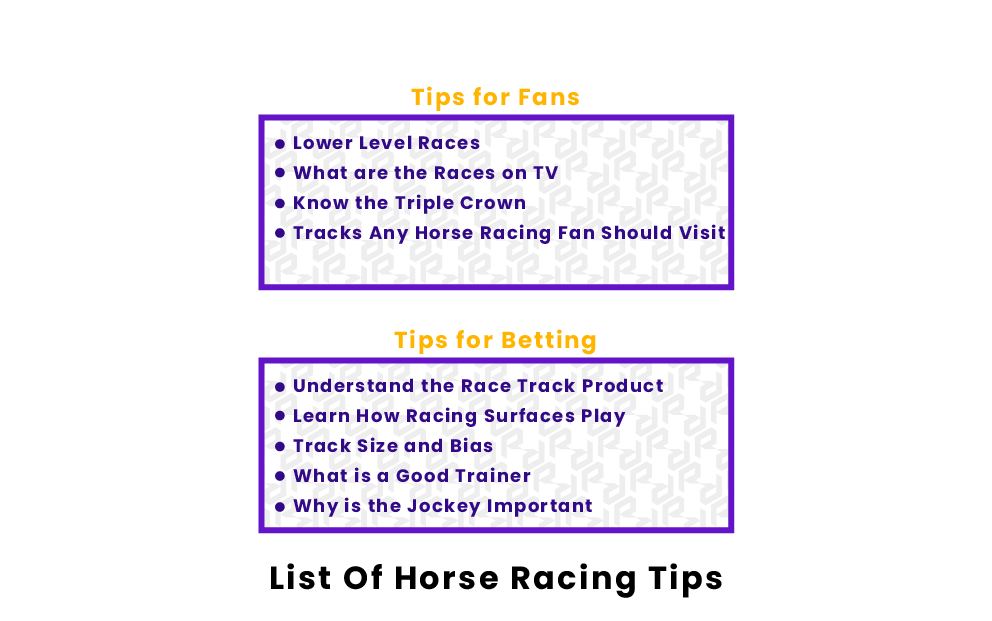 Once America’s most popular spectator sport, horse racing has seen its popularity steadily decline over the past 50 years. However, there are over 25 states in America that host live horse racing meets at some point during the year. Horse racing still has a loyal and faithful fan base that supports all the quality meets around the country.

Lower Level Races: There are different classes of races in horse racing. A horse would normally start its career in a maiden race. This is a race composed of horses that have never won before. The next level of races are claiming races. This race is composed of horses that can be claimed, meaning purchased, before the race is run. The prospective owner must be licensed by the state and only takes ownership after the race is run. The next level of class is the allowance race. This is a race which is run for purse money only, meaning the horses are not for sale. They have higher purses and can be restricted to conditions and age.  For example, a 3-yo non-winners of 2 allowance race is composed of 3-year-old horses that have only won a maiden race.

What are the Races on TV: The next classification of races are the stakes races. This is where the upper echelon of horses compete. These races are the most prestigious and carry the biggest purses. There are levels of stakes races: restricted (state-bred), grade 3, grade 2, and grade 1. A state-bred stakes race is open only to horses bred in the state hosting the race. The most lucrative state-bred races are run in New York, which has a large breeding operation, where these races are run with purses up to $250,000. Graded Stakes races are the top level of horse racing. The only restrictions on graded stakes races would be age and gender. There were 440 graded stakes races run in the US in the year 2019, and of these only 103 were classified grade 1. The grade 1 races are not only the most prestigious races but also carry the biggest purses. America’s most popular race, the Grade 1 Kentucky Derby, is normally run on the first Saturday of May. This race, described by many as the most exciting 2 minutes in sports, is open to 3-year-old horses and carries a total purse of $3 million.

Know the Triple Crown: This is a series of three Grade 1 races for 3-year-olds. It begins with the Kentucky Derby which is run over 1 ¼ miles on dirt at Churchill Downs Race Track in Louisville, KY. Two weeks later, Pimlico Race Track in Baltimore, MD is the host of the Preakness Stakes, a dirt race of 1 3/16 miles. Three weeks after, the Belmont Stakes takes place at Belmont Race Track in Elmont, NY. This last leg of the triple crown is a grueling 1 ½ miles over the expansive Belmont dirt track. For the great majority of these horses, this will be the longest race they will ever run. The difficulty of achieving the triple crown is obvious when one realizes in over 140 years only 13 horses have ever accomplished this feat. The first triple crown winner was Sir Barton (1919) and the most recent was Justify (2018). The most famous triple crown winner was also the greatest racehorse ever, Secretariat, who accomplished this feat in 1973.

Tracks Any Horse Racing Fan Should Visit: There are only a small number of race tracks that fans flock to every meet. The most popular track by daily attendance year after year is Saratoga Race Track in Saratoga Springs, NY. Averaging about 27,000 people a day, this is truly a unique place, a nostalgic town centered around horse racing. Every summer the sleepy town comes alive for about 2 months all due to the corresponding race meet. The racing is the best in the country and they host an auction of yearlings (1-year-old horses) which is also highly anticipated. Another very popular track is Del Mar Race Track in Del Mar, CA. Del Mar’s motto is “where the turf meets the surf.” This famous race track, built in 1936 by Bing Crosby among others, is only steps from the Pacific Ocean, has first class racing, and averages about 17,500 attendees per day. Another very popular track is Keeneland. This track is located in the middle of horse country, Lexington, KY.  Keeneland’s high quality of racing along with its location makes it one of the more popular tracks with about 15,500 people attending each day.

Understand the Race Track Product: There are over 75 flat race tracks throughout North America. These tracks differ in very important ways: quality of the horse, racing surface, and size of the racing oval. The highest quality racing meets are found in New York, California, Kentucky, and Florida (during the winter months). The New York Racing Association (NYRA) holds it’s race meets over three tracks: Aqueduct, Belmont, and Saratoga. California’s top tracks are Santa Anita Park and Del Mar. The highest quality racing in Kentucky takes place at Keeneland, Churchill Downs, and Kentucky Downs. The top quality horses in the Northeast are sent to Florida for the winter to race at Gulfstream Park. If horse racing fans want to watch and wager on the best racing in the country, these tracks are where they should go.

Learn How Racing Surfaces Play: Horses can run on any of three different surfaces: dirt, turf, and artificial (man-made of rubber, sand, recycled carpet etc). These surfaces are very different and most horses will favor one over the others. Dirt racing is hardest on the horse’s limbs because there is not much cushion to the surface. Dirt racing tends to be more speed-based, meaning the horses are running hard throughout the race. Turf racing tends to be different in that horses are often more relaxed through the first part of the race, saving energy for a late hard surge through the stretch. Artificial surfaces became more common in the US in 2004 as a way to give horses a safer surface to prevent injuries. There are several different types of artificial surfaces but they all seem to play more like turf tracks than dirt.

Track Size and Bias: Mostly all tracks in the US are oval in shape, but not all are the same size. Some tracks may be only 6 furlongs, while others may be 12 furlongs (a furlong is equal to ⅛ mile). The larger tracks would have wider turns and longer straightaways than the smaller ones. This is important in betting as the smaller track would generally be much more speed-favoring because it’s harder to pass horses on tighter turns and smaller stretches.

What is a Good Trainer: The trainer is the person who takes care of the horse. The trainer feeds, grooms, bathes, and exercises the horse each and every day. The trainer also keeps the owner informed of how the horse is doing both physically and mentally. The trainer, more often than not, will also decide when and where to race the horse. It is very important to know the historical data of race results before handicapping a race because, just like every other sport, some trainers win at a much greater rate than others. For example, Bob Baffert-trained horses win about 30% of the races in which they run. This is better than double the average horse trainer’s win percentage.

Why is the Jockey Important: About 10 minutes before a race begins, the trainer helps their jockey mount the horse they’re going to ride. At this point the trainer’s job is done and the only human interaction for the horse lies with the jockey. Again, like all other sports, some jockeys are more successful than others. Before wagering on a race, it would be smart to analyze the jockey standings. The NYRA standings show that Irad Ortiz, Jr. wins about 25% of the races he rides. At a high-quality meet, that percentage is outstanding.