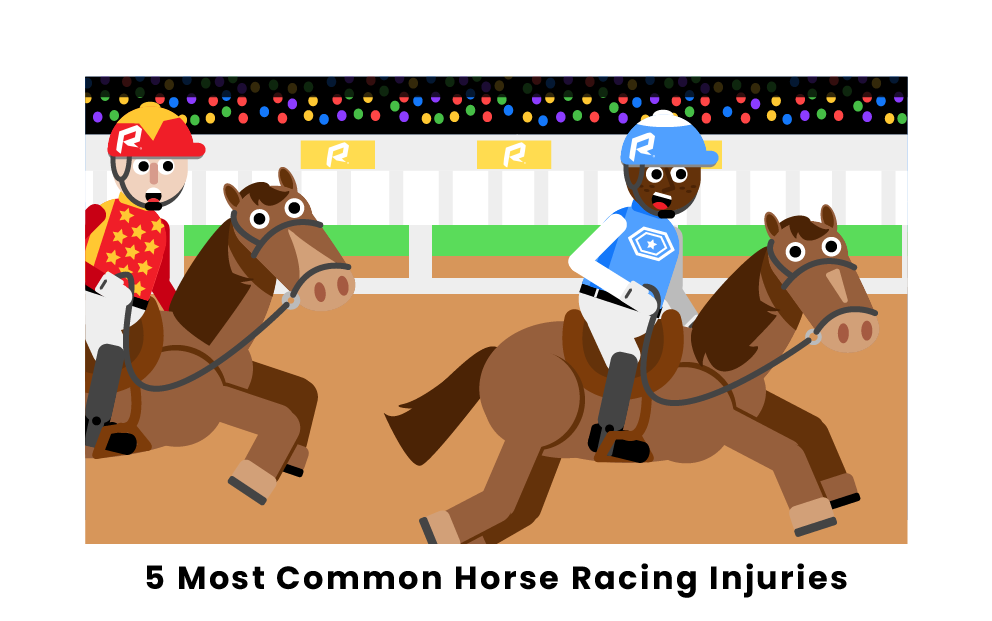 What are the most common injuries in horse racing?

The most common injuries as a jockey in horse racing are head injuries, specifically concussions. This athletic profession is a dangerous profession as jockeys sit on top of the horse and aim to control this large animal's movements. Oftentimes, the race horse is aggravated by various factors and will throw the jockey off violently. When this happens, jockeys are flung up into the air and then fall down very hard, potentially landing on their head. If this occurs, it is likely for the jockey to have concussion. Some concussions also occur within the starting gate when the horses are locked in, or when the jockeys enter or exit the starting gate.

Having a jockey crush his leg is common in the world of horse racing. This injury occurs primarily at the starting gate when the horses become very excited in a small enclosure. This excitement causes the horse to move and shakes around between the metal rails, pushing extreme pressure against the jockey's leg when the jockey is sitting in position with their legs on either side of the horse. Jockeys could also have their leg crushed out on the track if the horse throws the jockey off. A preventive technique is to cushion the metal rails so the pressure is not as severe.

Jockeys experience injuring their clavicle bones more often than not while riding the race horse. A clavicle fracture is a break to the jockey's collarbone, which is located towards the chest but considered one of the main bones in the shoulder. It causes severe pain to the athlete injured and will swell significantly. Many jockey fracture their clavicle bones due to the horses' rowdiness. Jockeys can only control so much of the horses movements, and when the horse becomes too excited, the jockey can be thrown off and land in a position that breaks the clavicle.

Injuries to the spine are severe injuries that jockeys have to be very cautious of in their career. Similar to head injuries, spinal injuries primarily occur when the horse raises its front legs to whip the jockey off its back and onto the hard surface of the dirt track. It is relatively common for jockeys to sustain a spinal injury while in the career, and some severe spinal injuries may end the jockey's career. Severe neck injuries in this sport can lead to paralysis, ultimately hindering the jockey to ride a race horse ever again.

Another injury that is often heard of in the racehorsing community is sustaining an injury to the arm. Injuries to the arm commonly include fracturing one or more of the arm bones like the radius or the ulna. Just like many of the other injuries, an arm injury is usually caused by being thrown off the horse and landing awkwardly on top of one's arm. The force from the horse throwing the jockey off its back and landing on the hard surface track will definitely cause a fracture to the arm.