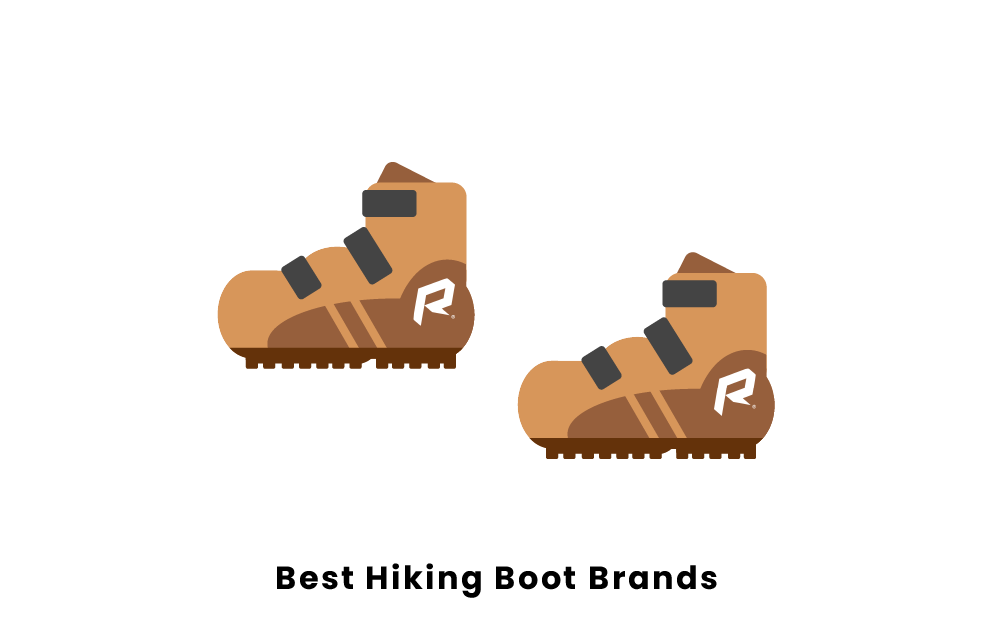 Hiking can be an intense and demanding source of physical activity that is best done with proper equipment. One of the most essential pieces of hiking equipment is specially designed boots. While there are many different hiking boot brands, a few are a cut above the others.

What are the most popular hiking boot brands?

Salomon is often considered the best hiking boots brand. The company was first founded in France in 1947, where it specialized in producing skiing equipment, including bindings, skis, and boots. It was not until 1992 that the company released its first pair of hiking boots. Besides hiking and skiing, the brand also specializes in trekking, backpacking, mountaineering, and running footwear. A few of the brand's best hiking boot styles include the X Ultra 4 Mid GTX and the Quest Prime GTX. The X Ultra 4 Mid GTX boots provide an impressive level of traction and comfort, while the Quest Prime GTX boots can withstand all terrains and weather conditions. A few notable athletes who use Salomon to compete include Italian skier Marta Bassino, Spanish trail runner Kilian Jornet Burgada, American snowboarders Desiree Melancon and Tommy Gesme, and French snowboarder Victor Daviet.

Keen is another popular brand known for its hiking boots. The company was founded in 2005 in Portland, Oregon, by Martin Keen. Keen offers a wide selection of footwear, including boots, shoes, sandals, and casual wear for various activities such as hiking, winter, water, and travel. The brand also offers a line of footwear specially designed for work that includes boots, slip-on/pull-on shoes, and service shoes. A few of the brand’s top hiking boot styles include the Targhee III Waterproof Mid and the Pyrenees. The Targhee III Waterproof Mid is very durable on the outside yet comfortable on the inside, while the Pyrenees has impressive arch support and traction. Keen is committed to making a difference and giving back to the community through its “The KEEN Effect” program. The company has several initiatives that focus on areas such as increasing the accessibility of the outdoors, providing grants to benefit kids, women, and conservation efforts, and making conscientious decisions to help protect the planet.

Merrell is a notorious footwear brand that was founded in Michigan in 1981. The brand debuted its first hiking boot in 1983 and was acquired by Karhu, a Finnish footwear company, in 1987. Ten years later, Karhu sold the brand to Wolverine World Wide, which has remained in control of the brand to this day. Besides hiking, Merrell also specializes in footwear for trekking, backpacking, trail running, and causal activity. The brand’s best hiking boot models include the Moab Mid and the Moab Low. The Moab Mid is one of the best-selling hiking boots in the world, and for good reason. The boots differ from traditional hiking boots, which can often be high cut and stiff, and instead resemble mid-cut sneakers that are more flexible and comfortable. The Moab Low model is the brand’s best-selling hiking shoe and resembles the Moab Mid, but it is more lightweight and lower in price.

Columbia Sportswear Company was founded in 1938 and originally specialized in ski apparel. Since then, the brand has expanded into producing other sportswear, outerwear, footwear, and equipment. Columbia offers sportswear for various activities, including skiing, snowboarding, hiking, fishing, hunting, trail running, golf, camping, and home goods. Compared to many other brands of hiking boots, Columbia is one of the more affordable options, with some boots costing as low as $59. Some of the brand’s top hiking boot styles include the Newton Ridge Plus II Waterproof and the Crestwood Mid Waterproof. The Newton Ridge Plus II Waterproof is an affordable boot known for its impressive waterproof capabilities and providing high levels of comfort and traction. The Crestwood Mid Waterproof boot also performs very well in wet conditions and has a notable amount of interior padding for comfort and stability.

La Sportiva is an Italian footwear company that was founded in 1928. The brand is widely known for its mountaineering boots that can withstand the extreme conditions and altitudes of the world’s largest mountains. It also specializes in hiking, trekking, backpacking, and trail running footwear. Aside from footwear, La Sportiva also offers a variety of clothing, equipment, and accessories for the outdoors. The brand boasts an extensive team of professional athletes in the areas of climbing, mountain running, and skiing, such as Jeff Yoo, Ashleigh Thompson, and Jason Dorais. A few of the brand’s best hiking boot models include the Nucleo High II GTX and the TXS GTX. The Nucleo High II GTX boots provide a high level of durability and feature a Gore-Tex liner and Nano-Cell technology that increase the boots' breathability. The TXS GTX boots thrive in the mud and snow in terms of protection and traction while also providing a high level of comfort.

Timberland began in 1952 when founder Nathan Swartz invested in the Abington Shoe Company. After buying out the company and moving it to New Hampshire, Swartz eventually introduced the famed Timberland “yellow” boots in 1973. The waterproof boots were so popular that the company changed its name to “Timberland” in 1978. Since then, the company has expanded to sell a variety of footwear such as winter boots, hiking boots and shoes, sneakers, and dress shoes, along with professional workwear, clothing, and accessories. One of the brand’s top hiking boot styles includes the Mt. Madden Mid Waterproof. The Mt. Madden Mid Waterproof boots feature TimberDry Waterproof Technology to help keep feet dry along with Anti-Fatigue Technology to enhance comfortability. Aside from specializing in footwear and apparel, Timberland is strongly committed to making a difference by producing eco-friendly products, planting trees to benefit the environment, and building stronger communities through a variety of initiatives.