What is Hang Gliding? 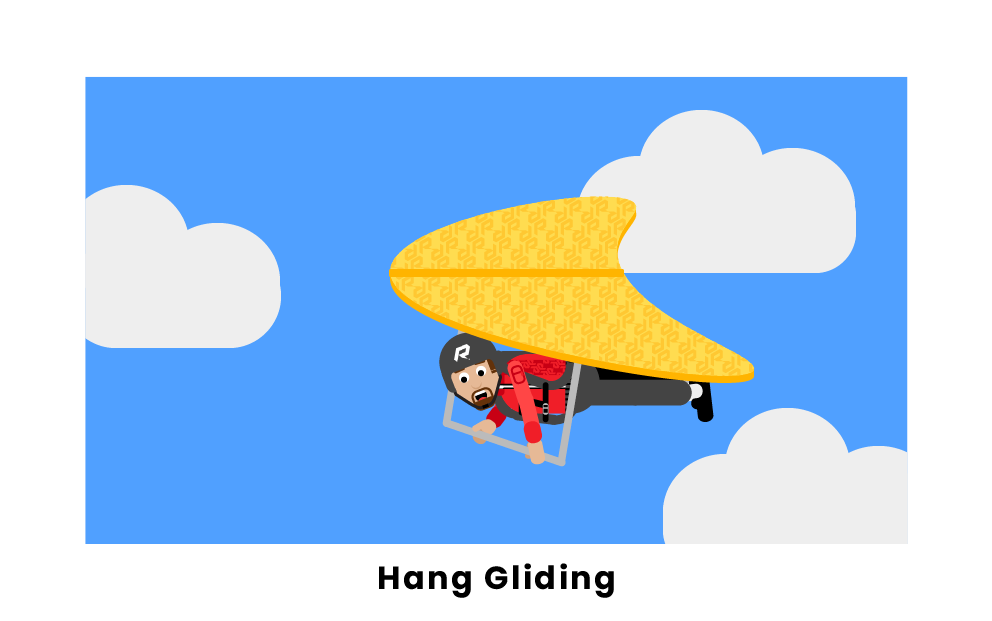 Hang gliding is an aerial sport where pilots fly a lightweight, non-motorized aircraft known as a glider. Gliders are wide, delta-shaped sails that use gravity and thermal updrafts to maintain flight. Hang gliding was first invented in the 1890s by some of the pioneers of air travel. In 1891, German aviator Otto Lilienthal began a series of thousands of successful flights using a glider before perishing in a fatal glider accident in 1896. Lilienthal’s glider was known for its repeated, successful flights, and before his death, his designs were published, along with kits for others to make their own gliders. These early gliders were biplanes, meaning that they had two sets of wings and were controlled by a pilot hanging from a parallel bar beneath the craft by the armpits.

The modern version of hang gliding emerged in the 1960s, replacing Lilienthal’s biplane design with a more aerodynamic, delta-shaped sail, inspired by the kite designs of Francis and Gertrude Rogallo. Initially, these gliders were used to glide down the coastal dunes of California beaches or towed behind speedboats in Australia, similar to paragliding. The modern hang glider was invented by John Dickenson, an Australian, who added a swing seat to the Rogallo kite design. Hang gliding quickly rose in popularity throughout the United States in the 1970s, and continual improvements to the sport have been made since then.

Hang gliders use gravity as their means of propulsion, meaning that the craft is always flying downward from its starting point. However, by locating and flying into thermal updrafts, gliders can stay aloft for extended periods of time, even hours, before landing. In 1999, the world-record flight distance for a hang glider came in at 308 miles. International hang gliding is overseen by the Fédération Aéronautique Internationale (FAI), which organizes many world championships for hang gliders. American hang gliding activities are overseen by the United States Hang Gliding and Paragliding Association (USHPA).

What is hang gliding?

Hang gliding is a sport where pilots use gravity and updrafts to fly small, non-motorized aircraft known as gliders, which traditionally consist of a delta-shaped sail and a swing seat with a parallel bar for hand control. Hang gliding is a popular recreational activity, but many hang gliding competitions, managed both by the FAI and the USHPA, are held throughout the world. The history of hang gliding stretches back to the first pioneers of aviation, and the sport is continually being updated with better-performing gliders to enhance participant experience.

Where are the best places to go hang gliding?

There are many places throughout the world that are popular hang gliding destinations. In the United States, Kitty Hawk, North Carolina, is a popular destination due to its association with the famous brother duo of Orville and Wilbur Wright, who performed some of America’s earliest flight experiments. Another popular location is Rio de Janeiro, Brazil, where scenic hang gliding flights often begin over the Tijuca Rainforest and pass over famous sites such as the Pedra da Gavea and the Christ the Redeemer statue. Another popular hang gliding spot is Fethiye, Turkey, where glides can take off from Mount Babadag and fly over the Ölüdeniz Lagoon, where the annual Ölüdeniz Air Games are held as a result of the ideal gliding weather.

What equipment do I need to safely go hang gliding?

Various equipment is needed in order to hang glide safely. The first and most crucial piece of equipment is the glider itself, which consists of a sail supported by a rig of aluminum tubes with a crossbar and a control bar. Various wires also help the glider maintain stability and function, allowing for safe maneuverability and landings. Aside from the glider, pilots are required to wear a harness that attaches them to the glider, helmets, goggles, and often a reserve parachute, which can be opened in the event of a malfunction. Some hang gliding pilots choose to use instruments such as an altimeter used to measure altitude, or a variometer, which tracks the glider’s rate of ascent or descent.

Pages Related to What is Hang Gliding?