What Are The Basic Rules Of Handball? 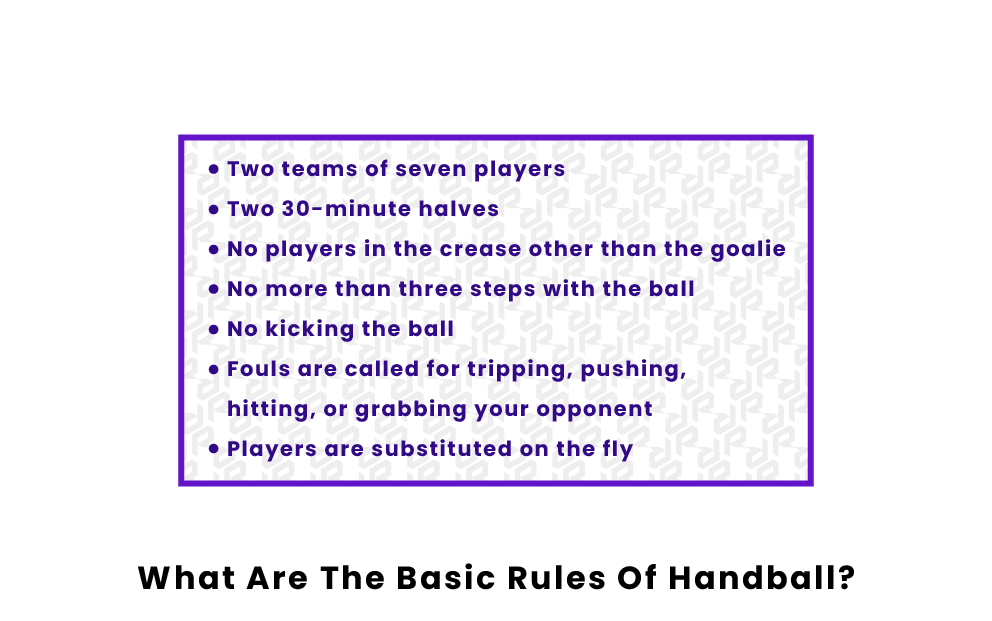 Looking for the most basic rules of handball? Look no further! Keep reading to learn the basics about the great sport of handball.

Handball is a popular sport played by men, women, and children that consists of a variety of rules and regulations. It requires 14 players, referees, the court, a ball, and 2 goals. Handball is usually played on a court that is 40 by 20 meters, with the goals placed in the center of the shorter ends. The crease or goal area is marked by a line 6 meters from the goal. A dashed line placed 9 meters from each goal marks the free throw line. Handball games typically last for 60 minutes and are split into two 30 minute halves. Players can be substituted at any time, provided they cross through their respective team's substitution box on the sideline.

No players other than the goalkeeper are allowed within the crease area (6 meter line) on the handball court. An exception to this rule happens when a player jumps in a shooting motion from outside the crease area and lands inside it after their shot.

Each team is required to have 7 players, composed of 6 field players and a goalkeeper.

No players other than the goalkeeper are allowed to enter the crease area, which is marked by a line 6 meters from the goal. The only exception to this rule is when a player jumps into the crease and lands inside of it after taking a shot.

If a player takes three or more steps without dribbling, passing, or shooting the ball it is deemed a "walking" penalty. This can also happen if the player holds the ball for longer than three seconds.

Players are not allowed to kick the ball in handball (with the exception of the goalkeeper). Kicking will turn the ball over to the other team.

In handball, players can't begin to dribble the ball, stop to hold it, then dribble again. Doing so will result in a double dribble penalty and turnover.

When the ball crosses the boundary of the court, the opposite team of the last person to touch it will throw the ball back into play.

Tripping, pushing, charging, hitting, or grabbing your opponent is not allowed in handball and can lead to a foul. Fouls can result in a free throw for the other team, or at times more serious punishments such as disqualification. Handball does typically allow some extent of contact to the front of the body between opposing players, however it is at the discretion of the referee to decide what level of contact is deemed fair play. Referees may also disregard a foul if the pace of play carries on, in similar fashion to soccer.

In handball, referees have yellow cards that they can administer to players when they deem a play to be excessively rough or unsportsmanlike. If a player receives a yellow card, it is taken as a warning from the referee. If the same player were to receive a second yellow card in the same game, they'd have to sit out for two minutes and their team would continue playing without replacing that player on the court. A third yellow card to the same player will yield the same result and, if that same player commits a fourth punishable offense, they are ejected from the game. While this process is the standard method for governing play, particularly blatant fouls can immediately result in a two minute penalty or even immediate ejection from the game. Once a team has received three collective yellow cards, every card handed out comes with a two minute penalty.

Substitutions in handball are done "on the fly". This means that players can enter or exit the field at any time, as long as they cross through their team's substitution box on the sideline. Rolling substitutions allow for quicker transitions as play doesn't have to be stopped to change personnelle.

In the event of a tie after the 60 minutes of regulation, overtime will take place. Overtime in handball consists of two five-minute halves. Even if one team scores during overtime, the other team still has the rest of overtime to tie the game.

If the game is still tied at the end of two overtimes, penalty throws will commence. Both teams alternate taking five penalty throws, and whichever team has more points after those throws is declared the winner. If the teams are still tied after these initial five throws, the shootout continues until one team has successfully scored and defended a goal in the same round.

What is the three step rule in handball?

The three step rule in handball relates to the number of steps players are allowed to take while in possession of the ball before being called for walking. Players holding the ball may take a maximum of three steps without dribbling. In handball, it is prohibited for players to walk around the court while holding on to the ball. If a player is dribbling and stops, they have three steps to stop before they are called for a walking violation that results in a turnover.

Can you kick the ball in handball?

What happens if there is a foul within the nine-meter area?

Pages Related to What Are The Basic Rules Of Handball?