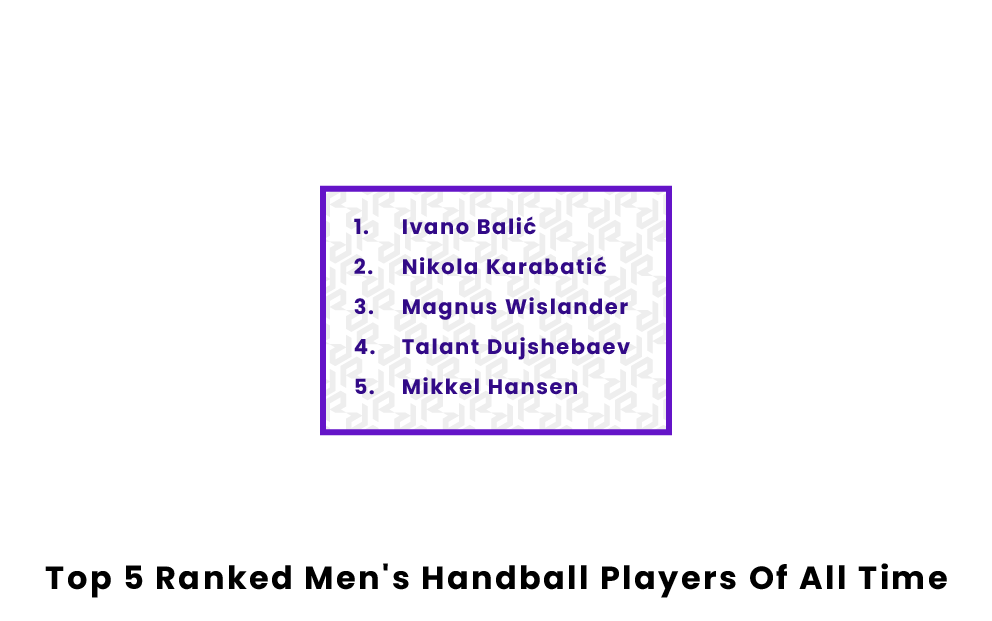 Handball is a team sport that requires great chemistry and communication to succeed. Nonetheless, some players rise to the top and lead their teams to greatness seemingly single-handedly. Read on to learn about these titans of the sport and what they accomplished to earn their spot on this list.

Who are the Top 5 Men’s Handball Players of All Time?

Despite these individual accolades, Balić remains a team player, downplaying his own success to that of the team. His teams still have had success, though: Croatia captured gold medals at the 2001 Mediterranean Games, the 2003 World Championships, the 2004 Olympics, and the 2006 World Cup, along with many silver and bronze medals at various tournaments.

In 2010, the International Handball Federation (IHF) held an online poll asking who the greatest handball players of all time were. Balić was one of the three male nominees, alongside Nikola Karabatić and Talant Dujshebaev. Balić won 48.7% of the overall vote, giving him the title of Best Male Handball Player of All Time, although many argue that Karabatić has surpassed him in recent years.

In recent years, Nikola Karabatić has made his case for being the greatest handball player of all time. His third IHF World Player of the Year award in 2016 gave him the most ever at the time after winning it previously in 2007 and 2014. Apart from these, he also has 36 other individual awards, including being the MVP of the 2011 and 2017 World Championships and the 2008 and 2014 European Championships.

Karabatić’ began his club career with Montpellier HB, where his team won four French league titles in a row, from 2002-2005, and won the European Handball Federation Champions League in 2003. He then won four straight German titles with THW Kiel (2006-2009) before returning to France and winning three straight titles with Montpelier again (2010-2012). He then won the Spanish league twice with FC Barcelona Handball (2014 and 2015) and the French league (2016-2018) with Paris Saint-Germain Handball.

Karabatić has also been a part of successes at the international level. Despite being born in then-Yugoslavia, Karabatić’s family relocated to France when he was a child, and he plays for the French National Team in international handball. With Karabatić on the team, France won gold at the European Championships in 2006, 2010, and 2014; the Olympic Games in 2008, 2012, and 2020; and the World Championships in 2009, 2011, 2015, and 2017.

Karabatić uses his strength to get shots off and distribute the ball on offense and is a physical wall on defense. His game is often likened to LeBron James in basketball. Karabatić’s legacy though has been tarnished due to his involvement in a match-fixing scandal. While the scandal doesn’t take away from his immense skill on the court, it does taint his legacy.

Magnus Wislander is a former Swedish handball player who played club handball for Regberdslid Goteborg in Sweden and THW Kiel in Germany. At Regberdslid, Wislander won the Elitserien (Swedish league) five times, including four seasons in a row (from 1984-1985 to 1988-1989). Wislander helped Kiel win the Bundesliga (German league) seven times in nine seasons from 1993-1994 to 2001-2002. He was also voted as the best player of THW Kiel every year from 1994-1999 and the best foreign player in the Bundesliga from 1994-1996.

Wislander also had a great international career, winning gold at two World Championships (1990 and 1999) and four of the first five European Championships (1994, 1998, 2000, and 2002). Sweden came tantalizingly close to earning gold at the Olympics, too, but instead brought home three silver medals (1998, 1992, and 1996). In 2000, Wislander was elected Best Male Handball Player of the 20th Century by the IHF. He was also selected the Best Player of the 20th Century by Sweden.

While there have been better players after him, it’s arguable that Talant Dujshebaev was the best player of his time. He certainly has the hardware to back it up: Dujshebaev has won 62 trophies, 37 as a manager, over his long career.

Dujshebaev went on to play 133 matches for the Russian National Team in the next year, scoring 726 goals. He then became a Spanish citizen and scored 569 goals in 158 matches. Dujshebaev’s performances on the domestic and international levels earned him one of three spots on the IHF’s Best Male Handball Player of All Time voting ballot in 2010. He finished second to Magnus Wislander in the IHF’s Best Player of the 20th Century voting. Dujshebaev earned two IHF Player of the Year awards as well, in 1994 and 1996.

It is not often that a left-back is heralded as a top player in handball, but Mikkel Hansen undoubtedly is. Similar in build to his Paris Saint-Germain teammate, Nikola Karabatić, Hansen is a powerful shooter and a proven goal scorer.

Andrey Lavrov is an all-time great goalkeeper from Russia. Lavrov had a long and storied career in the net, with three Olympic gold medals to back his claim to greatness. Interestingly, Lavrov is the only handball player to ever win an Olympic gold medal with three different teams. He won Olympic gold representing the Soviet Union in 1988, the Unified Team in 1992, and Russia in 2000.

Outside of this Olympic success, Lavrov also won gold medals in the 1993 and 1997 Handball Men’s World Championships. Andrey is a legend in Russia, having captained their handball team for many years, and was named the Russian Handball Player of the Century in 2001.

Gheorghe Gruia is a legendary Romanian right-back whose impact on and off the court is still felt today. He received one of the highest honors a handball player could ever dream of earning, being named the Greatest Handball Player of All Time by the International Handball Federation in 1992.

After his playing career came to an end, Gruia moved to Mexico City and became a staple of the sport in Mexico. He coached various Mexican handball teams, including the Mexican National Handball Team from 1978-1980 and 1988-1991, and is largely credited with popularizing the sport in Mexico. His dedication to the sport and its growth in Mexico has earned him the distinction of being the father of handball in Mexico in the eyes of many fans.

What men’s handball player has won the most Olympic gold medals?

There are currently two players tied for the most Olympic gold medals, Nikola Karabatić and Luc Abalo. Each player has a total of three Olympic gold medals, as well as an Olympic silver medal. Both players represented France in the 2008, 2012, and 2020 Olympics, where they won gold medals each time. At the 2016 Olympics, the French team also took home a silver medal after a disappointing loss to Denmark. France’s recent dominance in the sport has allowed these players to become the sport’s most decorated Olympians of all time.

What men’s handball player holds the record for most goals scored in an Olympics?

The record for the most handball goals scored in a single Olympic tournament belongs to Mikkel Hansen of Denmark. Hansen set the record at the 2020 Tokyo Olympics with a whopping 61 goals. The record was previously held by Kyunghshin Yoon of South Korea, who scored 58 goals in the 2004 Olympic Games. This record is another impressive accolade for Hansen, who is on course to go down as one of the greatest players handball has ever seen.

Who is the highest-paid men’s handball player?

The current highest-paid men’s handball player is Mikkel Hanson, who is earning over €1.5 million in salary for the 2022 season playing with PSG Handball. His teammate, Nikola Karabatić, is the second-highest-paid handball player earning around €1 million from PSG this season. Paris Saint-Germain’s star-studded roster accounts for one of the highest payrolls of any club in the sport.