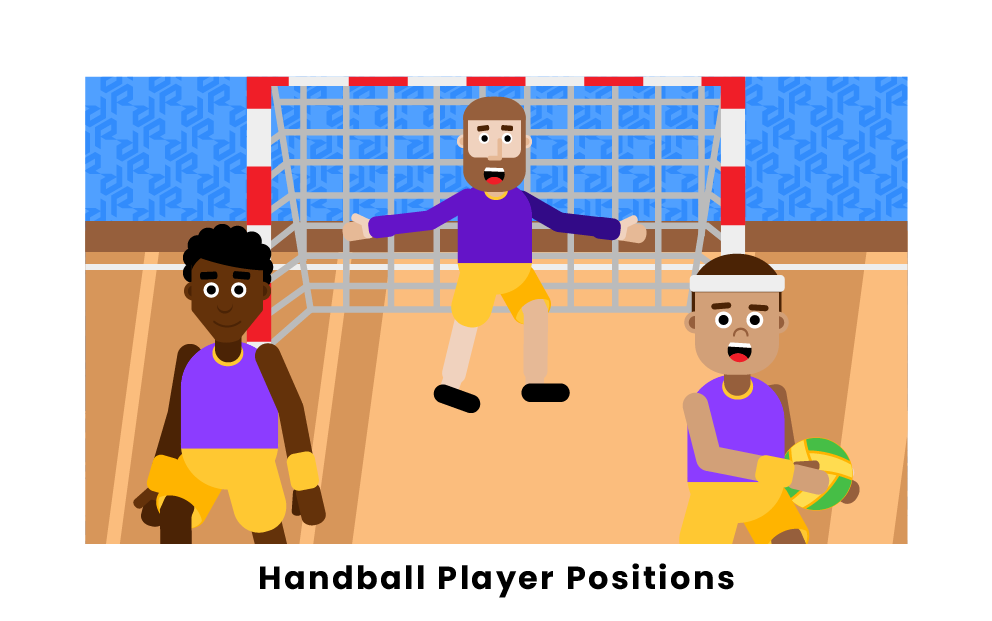 There are seven players on the court for each team at the same time in a game of handball. These seven players arrange themselves in certain positions to maximize scoring chances or to successfully defend their own goal from the opposing team. Read on to learn more about player positions in handball!

What Are The Positions in Handball?

Although most players have different roles for offense and defense, the basic naming scheme for handball players follows their offensive roles:

There are alternative names for these players used strictly in defensive setups as well:

These positions designate the area on the court where they line up relative to the center of defense. For example, the “far right” defender will be near the sideline guarding the offensive team’s left wing, while the “back center” defender initially marks the center forward in the middle of a formation.

In handball, non-goalkeeping players are known as “field players.” Field players are not allowed to use their feet to touch the ball, while a goalkeeper can use any part of their body to make a save. Goalkeepers are the only players allowed to be inside the goal perimeter area while touching the ball. Goalkeepers have to wear different colored uniforms, like goalkeepers in soccer, but unlike soccer, they may be substituted for field players if the offense wants more attacking players. 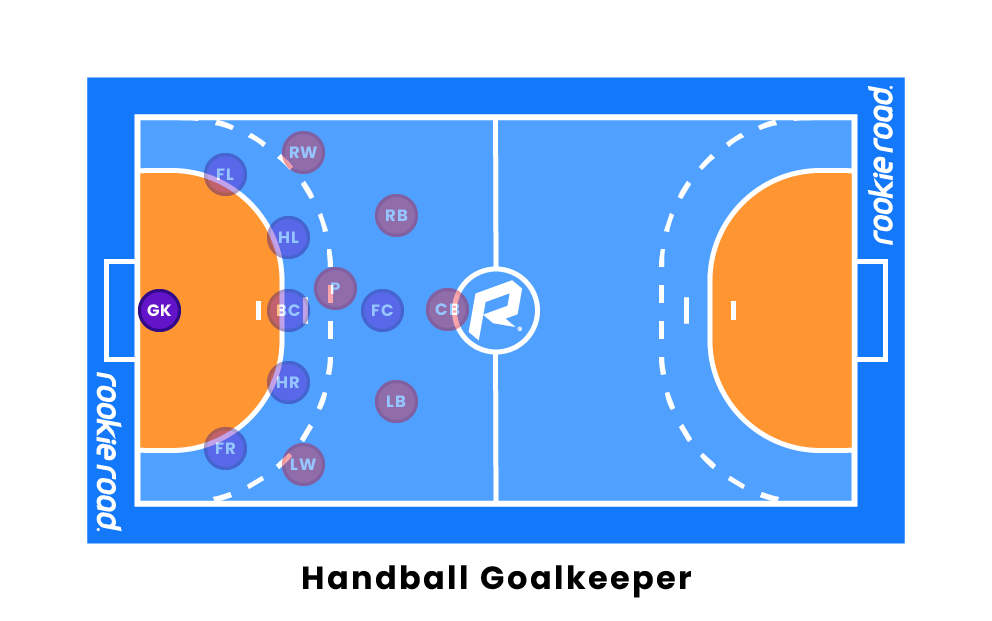 Goalkeeper is one of the most difficult positions to play in handball. The goalkeeper may act as a field player when outside of their semi-circular goalkeeper perimeter zone, but they may not carry the ball over this line. 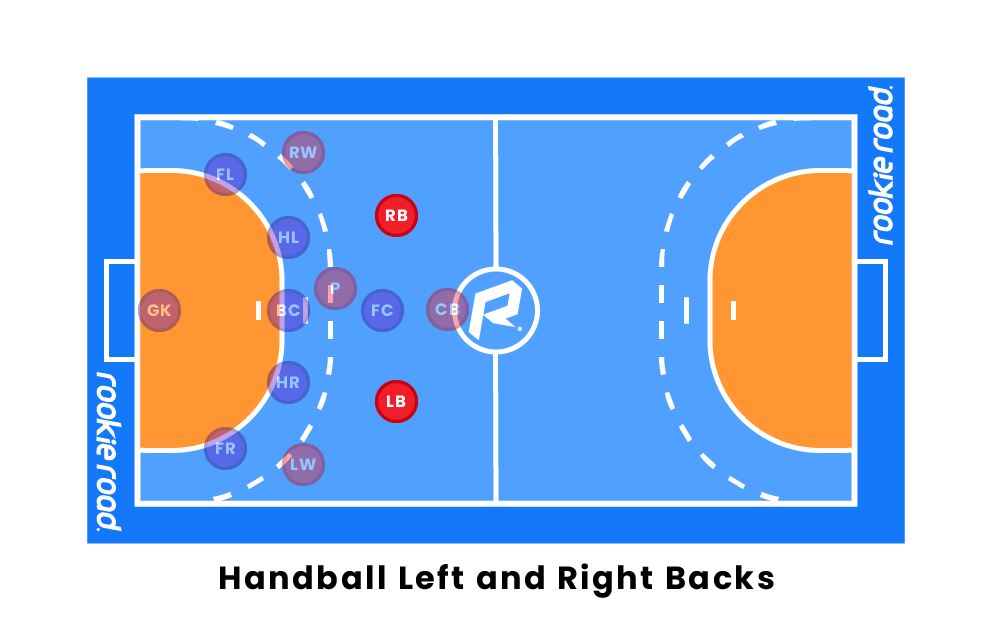 Left and right backs hold very similar roles on the handball court. They are situated between the left or right wingers and the center players while on the attack. In defense, the left and right backs drop in to defend the left half and right half, respectively. The exact spots these players occupy on the court can change based on the defensive formation and specific types of defense.

Left and right backs have to be some of the most physical players on the team. The left and right backs need to be able to jump over defenders to get shots off because they occupy spaces that are usually more clogged on the court. These players are ideally taller and are strong enough to get long-range shots off. 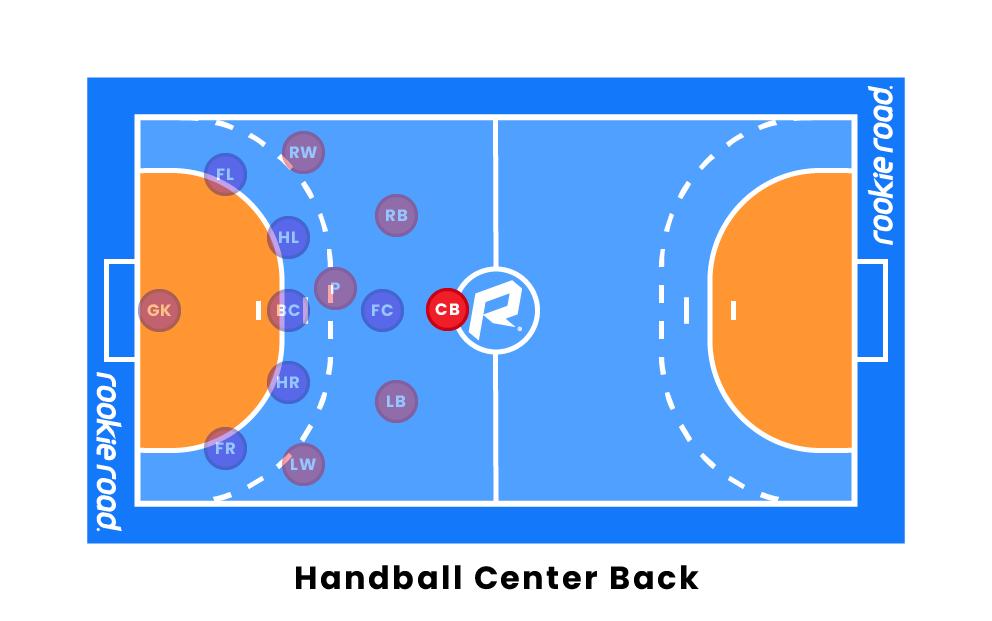 The center back is much like a point guard in basketball, who also has to direct teammates before finding the right pass to get a shot off. Being a good center back requires a proactive, creative, and attacking mindset, as well as the experience to know how the opposing team might react to certain offensive movements.

The center back also effectively runs the defense. Common defensive formations that the center back might arrange their team into are the 6-0 (or “flat” defense), where every player is on the same level, and the 5-1 defense, where one of the center defenders plays just in front of the other. 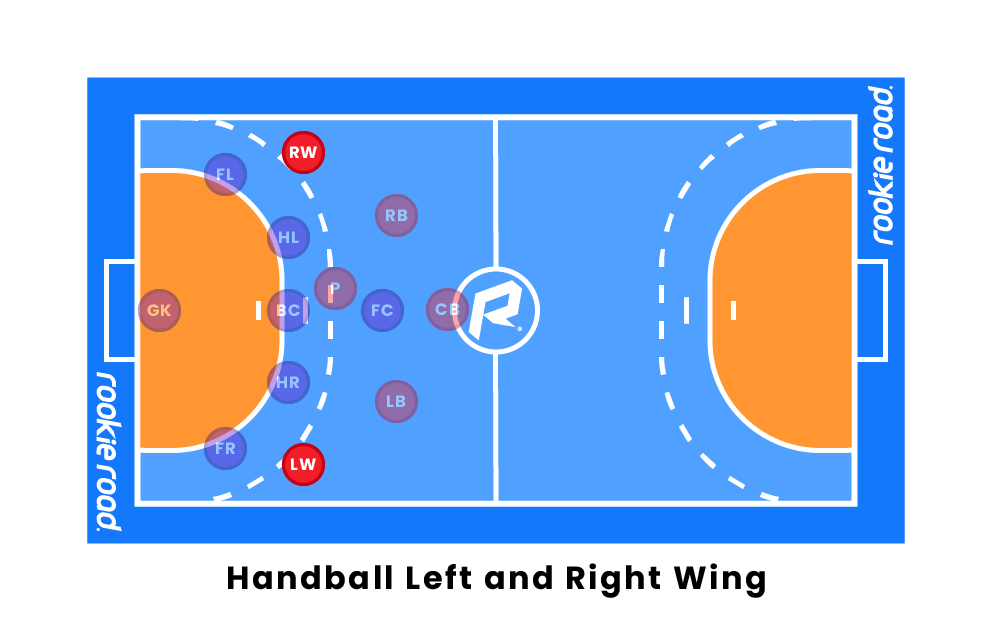 The left and right wingers, like left and right backs, hold very similar roles in offensive and defensive play. The wingers are typically faster players because they have to get up and down the court quickly.

Left wingers are usually right-handed because they need to be able to get accurate shots off from the left side of the court, and it is easier to do so from an inside angle. Using this same logic, it is also more advantageous for right wingers to be left-handed.

The wingers use wide jumps from the outside of the court to soar into the middle and get even better angles to shoot at the goal.

On defense, the wingers drop into the right back and left back positions, respectively. They are responsible for guarding the opposing teams’ wingers, attempting to cut off their shooting angles by staying in front of them at all times. 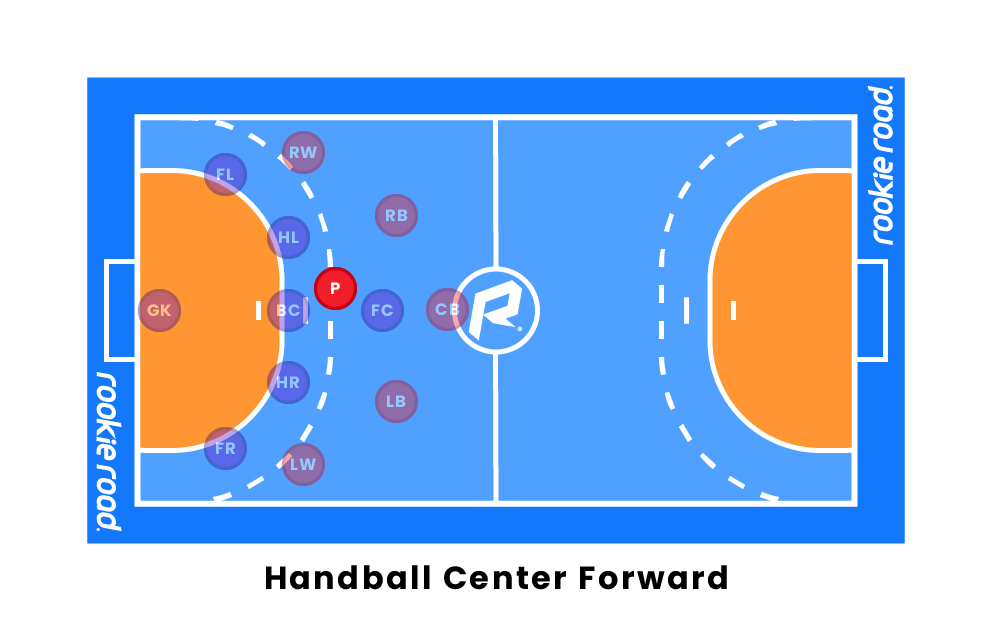 The center forward, also known as the pivot or circle runner, has a unique offensive job. The center forward distracts the defense by running around the defensive formations, causing havoc so that the offense might exploit defensive breakdowns. The pivot can also be a valuable player to pass and receive the ball from, constantly moving to distract the defense. Without the pivot, offensive play in handball would be much more stagnant.

A good center forward needs qualities of strength and agility, but control over passes and shots is also key. The center forward does not need to jump as much as the wingers or backs, as they usually try to make plays from beyond the base layer of defense.

On defense, the center forward becomes the back center of the defense. In this role, the player is responsible for not getting dragged out of position and keeping as much of their body in between the attackers and the goal as possible to block any incoming shots.

What is the best position to play in handball?

In handball, the center back is the best position to play. This position is similar to the role of a point guard in basketball, setting up the offensive and defensive formations and tactics on each possession. The center back is the main ball handler on offense and anchor of the defense on the other end of the court. Although some may prefer other positions, center backs are most likely to be the team’s most skilled and experienced player.

How many players are in a handball game?

There are 14 players on a handball court at once, seven for each team. Each team has a goalkeeper that almost always stays in their own goal. This means there are usually 13 players on one end of the court at a time, with six players attacking and seven defending. Each team is allowed a maximum of seven substitute players on their bench. These substitutes are allowed to enter and leave the court at their leisure, but the player they are replacing must leave the court before the substitute can participate in a play.

How many positions are there in handball?

There are seven basic positions in handball, with extra names for the roles of defenders. The only position that doesn’t change names is the goalkeeper, who is almost always in their own goal perimeter area. These seven basic positions are goalkeeper, left back, center back, right back, left wing, center forward, right wing. When a team is on defense, their field positions are called far right, half right, back center, half right, far right, and forward center.