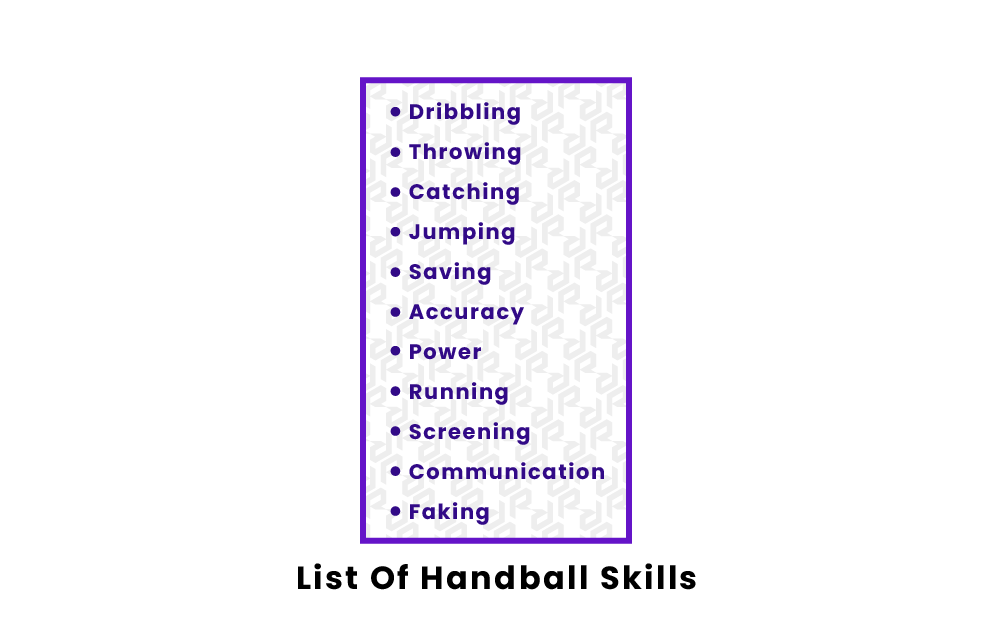 In order to master handball you must learn a certain number of skills and practice them until they are second nature. Most of the skills in the list below can be transferable to other sports, but playing handball is definitely a unique experience.

It is important to know how to dribble when entering a game of handball. If you are a ball carrier, you must dribble in order to move up the court. Focus on dribbling with the same size ball that you will use during a game, or a smaller ball to develop better coordination.

Throwing the ball is vitally important to the game of handball. You will be throwing the ball to either shoot or pass to a teammate. Practice throwing with both hands using both overhand and underhand motions. Being able to pass or shoot with either hand is a great skill to have, and will make you a more well-rounded player on offense.

Catching is most often used when passing the ball or when playing goalie. It is important to work on hand-eye coordination because if you drop the ball, you give your opponents a chance to get possession. While playing in goal, catching the ball is critical to saving goals for your team.

Making sure you maximize your jumping ability is an important aspect of training for handball, especially for offensive players who shoot the ball often. In handball, players will frequently perform a jump shot, which means they jump before throwing the ball at the net. This can be done to gain a height advantage over a defensive player or get closer to the opposing net without stepping in the crease. Jumping can also be used when catching the ball if it is above your head.

This skill is most important for goalies, but sometimes other players on the court as well. Being able to save the ball by either catching or deflecting it will help your team stay in the game. Defenders can also save the ball indirectly by using their body to block shots from the other team.

Accuracy has a strong case for being the most important skill to have in handball. Having good accuracy when you shoot will result in a better chance of scoring, which will help your team win. When passing, accuracy is helpful because you will aid your teammates in keeping possession. Effective passing is integral in any offensive possession and could lead to a goal.

This skill is mostly needed for shooting the ball towards the net. Combined with accuracy, powerful shots will be difficult for any goalkeeper to save. You can practice your power throws against a wall or with a teammate in the net. Be sure to control where the ball is thrown so you do not miss the target.

While you are not running the whole time during a handball game, it is still an important skill. On offense, being able to get by defenders and make your way towards the net is easier when you are fast. On the other side of the game, defensive players need to be able to move quickly in order to intercept passes and block shots headed for the net. There are tons of drills that you can do to increase your speed, endurance, and acceleration.

In handball, screening is mostly used in the form of a pick and roll. Similar to basketball, a teammate will stand in front of a defender so that the ball carrier can go by easily. This is an important skill because it creates space for a player to either pass or shoot the ball on net.

While not necessarily as apparent in game, having good communication skills is crucial in handball. Communication within the game aids with other aspects of the game like passing and screening, by making sure everyone on your team is on the same page. Miscommunication can ruin scoring opportunities, and give the defending team a great chance to steal the ball and capitalize on the other end of the court.

Faking is a commonly utilized skill that can benefit the team in possession of the ball tremendously. The art of faking can be broken into two main scenarios: shot faking and pass faking. Each of these types of fakes are meant to draw drastic movements out of the defense in an attempt to get the ball, opening up more room to complete passes and leaving lanes for offensive players to take shots on the goal. Faking is an instrumental part of offense in professional handball, making it a worthwhile skill to build for any aspiring pro handball players.

Why is dribbling an important skill in handball?

Dribbling is a very important skill in handball, as you are not allowed to move up the court without dribbling. The three-step rule, also known as "walking", prohibits a player from taking more than three steps without dribbling. If this rule is violated by a player, possession is transferred to the other team.

How fast can handball players throw?

In spite of the large size of a handball, about 15-17 ounces, professional handball players can throw remarkably fast. The estimated average speed of a handball shot sits at just over 67 mph. For reference, the average fastball in Major League Baseball travels at a speed of about 93.7 mph. When you take into consideration that the balls used in Major League Baseball weigh about five ounces, three times less than the average handball, what may have sounded like an unimpressive shot velocity becomes quite the impressive figure.

What is considered a foul in handball?

In handball, there are a few fouls that players should avoid committing, as fouling can result in consequences for your team such as a turnover, or free-throws for the other team. Actions that are considered a foul in handball include tripping, pushing, clinching, charging, or hitting the opponent while in the air. If a referee sees you commit one of these prohibited actions, you will be called for a foul and consequently hurt your team, so be sure to play good defense at all times.