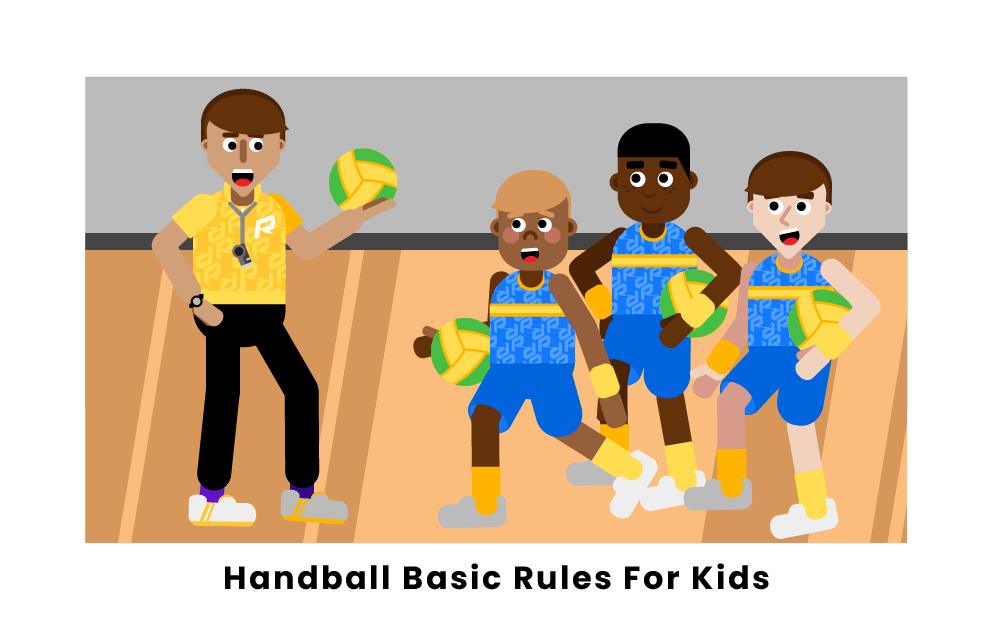 A handball team has seven players, six on the court and one goalie.

Two teams of seven compete against each other. That means 14 people on the court.

Players can be substituted in or out of the court at any time.

No player besides the goalie is allowed in the goal area.

Shots can only be taken outside the goal area.

The game is started when a player in the center throws the ball to a teammate.

You cannot take more than three steps without bouncing the ball.

You cannot hold the ball for three or more seconds without passing or shooting it.

The goalie is the only player that is allowed to kick the ball, and they can only kick it within their own goal area.

Any player who breaks a rule can cause a foul to be called. Yellow cards are given for such fouls.

Any player who causes more than three fouls or breaks a serious rule will be immediately removed from the game.

A throw-in happens when the ball goes out of play on either side of the court.

A corner is when the ball goes out of play on a goal line and it was last touched by a defender. The throw-in is then taken from the closest corner of the court.

A goalie can throw the ball back into play when an attacker puts the ball out of play near the goal line.

The objective of the game is to score goals by getting the ball into the net. The team with the highest score at the end wins the game.

The game is 60 minutes long, and there are two halves of 30 minutes each.

If there is a tie after 60 minutes, overtime will take place. Overtime in handball consists of two five-minute halves. A second set of five-minute halves can be played after the first if the game is still tied.

If the game is still tied after two sets of overtimes, there is a shootout to have a winner.