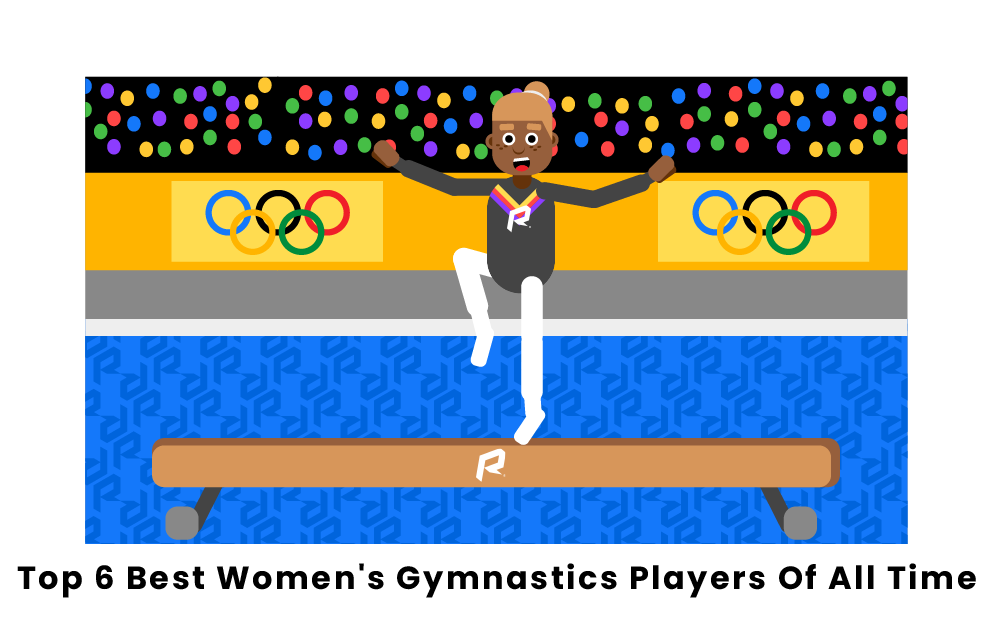 Gymnastics is a performative sport that encompasses systematic exercises and stunts, often performed in competition. It requires athletes to possess extreme coordination, strength, balance, flexibility, among other unique skills. Gymnasts use apparatuses, or pieces of equipment to perform skills that include, but are not limited to, tumbling, aerial flips, handstands, and splits. Gymnastics has been an official Olympic sport since the very first Olympic Games that took place in Athens, Greece, in 1896. Below are some of the top women’s gymnasts in the history of the sport.

Who are the best women’s gymnasts of all time?

In recent years, Simone Biles has cemented herself as the greatest gymnast of all time. At only 25, Biles has become the most decorated female gymnast in World Championship history. With 25 total World Championship medals, an astounding 19 of them have been gold. In just a single Olympic Games, Biles won five total medals, four of them being gold. Biles is one of the most decorated gymnasts of all time. However, accolades are not the only thing that makes her so special. Her unique mixture of power, precision, and creativity keep her on the podium and on billboards. She has become one of the world’s most famous and recognizable athletes.

Biles has had two tricks named after her, the “Biles” and “Biles II”. She is the only person to ever land these tricks in competition. Recently, the international gymnastics judging body has attempted to reduce Biles’ possible success. As she proposed a new trick, never before landed in competition, the judges did not offer it the maximum score. It is believed they did this in order to dissuade other gymnasts from attempting the trick. Simone Biles is in a league of her own. Gymnastics is as advanced as it has ever been, and some believe that it is not safe for other gymnasts to attempt the same moves as Biles.

Svetlana Khorkina is one of the most successful gymnasts ever, just based on medals. Combined, she has won 47 Olympic, World, and European Championship medals. She has seven total Olympic medals. In the World Championships, she has five gold medals in the uneven bars and is the first gymnast to win three all around-titles. Khorkina is also the second gymnast to ever win three European all-around titles. Khorkina’s career was plagued by injuries at times, but she was able to continuously come back and succeed.

Khorkina’s tall stature and unique physique kept her from performing many common tricks. However, this also played to her advantage because she could do things that shorter competitors were unable to accomplish. Due to her success and dominance on the uneven bars, she was nicknamed the “Queen of the Bars.” Her height allowed her to move back and forth between the bars with ease. Further, in her floor and beam routines, she emphasized grace and beauty rather than the difficulty of tricks. She maintained her success for ten years, which is rare for a gymnast. Khorkina is widely considered to be the best Russian gymnast of all time, which is impressive as Russia has always been a powerhouse in gymnastics.

Larisa Latynina has won the most Olympic medals of any gymnast. She has won 18 total Olympic medals and held the record for overall Olympic medals until Michael Phelps broke the record in 2012. Latynina is one of only five athletes to have won nine gold medals. She is one of three women to have won every single event at the Olympic or World Championship level. Latynina is also one of three women to have ever won the same event at the Summer Olympics three times. Latynina was one of the first real gymnastics stars, first becoming popularized in 1956. Latynina had a dancing background, so her performances clearly illustrated a dancer’s erect posture and classic lines. A good deal of her success can be credited to her consistency. Today, gymnasts have incredibly short professional careers, only lasting six years on average. Nonetheless, Latynina began her Olympic career at age 21 and won her last medal while nearing age 30. This longevity and consistency allowed her to achieve the level of success she did.

One of the most famous and widely known gymnasts is Nadia Comăneci. Her most notable feat is scoring the first perfect 10.0 in Olympic competition. This shocked the world as Comăneci was only 14 years old at the time. During the 1976 Olympics, Comăneci earned a total of seven perfect scores. Throughout her career, she would go on to win a total of five Olympic gold medals and nine total medals. Comăneci, at just age 13, won gold in all but one event at the European Championships. Overall, in Comăneci’s professional career, she won over 30 total medals.

Comăneci officially retired from professional gymnastics in 1984 and was inducted into the International Gymnastics Hall of Fame in 1996. Following her retirement, Comăneci was awarded the Olympic Order by the International Olympic Committee. The Olympic Order is an award given to people who have shown “remarkable merit in the sports world, or has rendered outstanding services to the Olympic cause, either through his own personal achievement or his contribution to the development of sport”. Comăneci improved the sport of gymnastics and took it to a new level. Her abilities inspired an entire generation, and she will be a gymnastics legend forever.

Olga Korbut is a gymnast that changed the sport forever. In the 1972 Olympics, Korbu became the first gymnast to attempt a backflip when releasing from the uneven bars. She stuck the landing and made history. This now-banned move was dubbed the “Korbut Flip.” For this, she was awarded a 9.8. When the score was announced, the crowd was in an uproar and chanted for a 10.0 for minutes straight. The judges did not change their scores. Overall, she won four Olympic gold medals and six total Olympic medals. Along with the famous Korbut Flip, Korbut also created the Korbut salto, a backwards aerial somersault on the balance beam. In total, Korbut won a total of 13 medals in the Olympics, World Championship, and European Championship. Korbut’s respectable medal accumulation and overall cultural impact make her unarguably one of the best gymnasts of all time.

Gina Goegan won an astounding 30 total medals in her professional career (Olympics, World Championships, and European Championships). At the World Championships, she won a total of nine gold medals. The stretch from 1992 to 1997 also brought Goegan five Olympic and 15 World Championship medals. Gogean was known for her impressive stability and consistent ability to perform tricks over and over again continuously. There was scrutiny for her “playing it safe” while new and younger gymnasts began attempting harder tricks and pushing the limits of gymnastics. However, although scrutinized by many, she continued doing it and continued winning medals. In 2013, Gogean was inducted into the International Gymnastics Hall of Fame.

Věra Čáslavská was a legendary women’s gymnast who represented Czechoslovakia in the Olympics in 1960, 1964, and 1968. During this time, she earned a total of seven Olympic gold medals, making her one of the most successful Olympic women’s gymnasts of all time. Once you factor in her title wins in other competitions, such as the European and World Championships, Čáslavská held 22 total international wins. She is also one of two women’s gymnasts to ever win Olympic gold for the all-around in consecutive Olympics, having done so in both 1964 and 1968.

Agnes Keleti was a highly decorated Hungarian gymnast who competed in the 1952 Helsinki and 1956 Melbourne Olympics. Keleti, who is Jewish, was forced to flee from her home country after the Nazi’s invaded and occupied Hungary. She made her Olympic debut at the relatively old age of 31 years old, yet was able to capture four medals in Helsinki. Keleti then went on to win six more medals at the 1956 Olympics in Melbourne. After the 1956 Olympics, Keleti once again was faced with a difficult decision, as the Soviet Union had just invaded Hungary. She ended up staying in Australia after the 1956 Olympics, where she was granted political asylum.

Polina Astakhova was a Ukrainian gymnast who represented the Soviet Union in the 1956, 1960, and 1964 Olympics. She won 10 medals throughout her Olympic career, five of those being gold medals in various events. After retirement from competition, Astakhova became the coach of the Ukrainian Gymnastics Team. She was inducted into the International Gymnastics Hall of Fame in 2002.

Which women’s gymnastics athlete has the most Olympic gold medals?

The all-time leader in Olympic gold medals amongst women’s gymnasts is Larisa Latynina, who represented the former Soviet Union with nine Olympic gold medals. Latynina is widely regarded as one of the best gymnasts of all time, and her Olympic track record certainly backs that sentiment up. She also earned five silver medals and four bronze medals on the world’s biggest stage, for a grand total of 18. This mark stood as the record for the most medals ever won by an Olympian until Michael Phelps bested her total in 2012.

Which country has the most Olympic gold medals in gymnastics?

The USSR currently holds the most Olympic gold medals in gymnastics with a total of 72 across both men’s and women’s events. This medal count does not reflect medals won by the country under different names including Russia and ROC. This is extremely impressive as the country hasn’t competed under the name USSR in quite some time. The United States has the second most gold medals in Olympic gymnastics with 39.

Which women's gymnastics athlete has received the most perfect scores in the Olympics?

In the modern scoring format for Olympic gymnastics, no women’s gymnast has ever received a perfect score. However, in the previous scoring format, Nadia Comăneci earned a total of seven perfect scores. All seven of these perfect 10’s were earned at the 1976 Olympics held in Montreal, Canada. To top it all off, Comăneci received her first perfect score at the age of 14, during her set on the uneven bars. Nadia was also the first person to score a perfect ten in Olympic gymnastics history. This is an absolutely remarkable feat, and one that likely will never be seen again. Astounding performances like this are a large part of why the new scoring system is in place today.