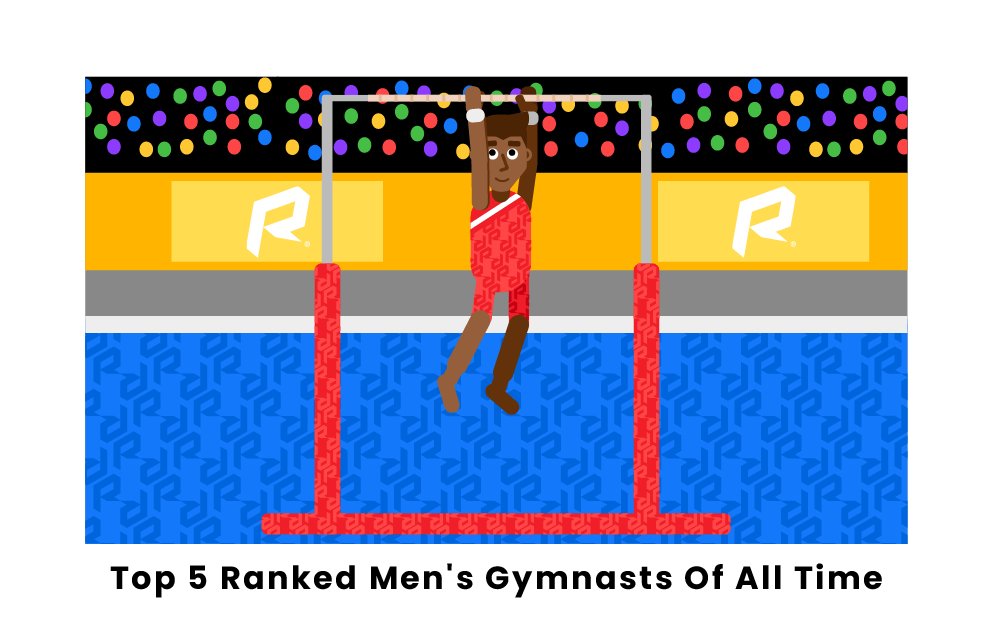 Gymnastics has become an extremely popular sport worldwide that showcases athletes strength, coordination, balance, flexibility, endurance, and more much. Over the course of the last century, we have seen numerous extremely talented gymnasts that have helped make the sport what it is today. These athletes boast impressive international resumes and have all succeeded at the highest levels of the sport. Read on to learn about the best male gymnasts of all time.

Who are the best men’s gymnasts of all time?

A member of the Japanese team, Uchimura is a seven-time Olympic medalist. He has won three golds and four silver medals, making him one of the most successful Olympic gymnasts of his time. Since 2008, Uchimura has won at least one medal in every world championship except for 2017 where he injured his left ankle, which ended his eight year win streak.

When Uchimura won the gold medal at London in 2012, he also won all three World Cup titles leading up to the event. He won another three World Cup titles and then dominated the 2016 Rio Olympics, making him the undisputed greatest of all time. He was undefeated in all-around for eight straight years, and no gymnast has shown that kind of dominance before or since. Uchimura was the leader of the 2016 team to earn Japan the all-around gold, then won the individual all-around gold two days later, becoming the first gymnast in 44 years to win back to back individual all-around gold medals in the Olympics.

Uchimura may only have three gold medals, which may not be a lot compared to other gymnasts. However, Uchimura makes up for his lack of numbers with his style and elegance when he is competing. Considered to be the “Roger Federer of Gymnastics”, everytime it is his turn to perform, the audience stops what they are doing and prepares to be mesmerized by raw talent. Uchimura recently competed in the 2020 Olympics in Tokyo, putting up a valiant effort. Unfortunately, his recent struggles with injury may have impacted his performance as he failed to place. No matter what his future holds, his success from 2010-2018 still proves him to be the greatest male gymnast ever.

Scherbo competed in his first gymnastics meet at the age of seven, and he was on the Soviet national team at the young age of 15. Scherbo first caught global attention when he captured victories at the Goodwill Games in Seattle, the Blube Memorial in Barcelona, and the Chunichi Cup, where he won four additional events.  In the European Championships in 1990, Scherbo scored a perfect 10 on the vault, which is something that is extremely rare for gymnasts.

Scherbo became a legend in the 1992 Olympic Games in Barcelona. Coaches did not look at him as a medal prospect, thinking his more experienced teammates had a better chance of netting gold medals. He proved all of his doubters wrong, as he became the first gymnast ever to win six gold medals in one Olympics. He won more medals than any other athlete in Barcelona. Scherbo earned gold medals in the team event, all around, pommel horse, rings, vault, and parallel bars. Michael Phelps and Mark Spitz are the only two athletes who have won more events in a single Olympic Games.

Scherbo is also the only gymnast ever to win a World Title in all eight men's gymnastics events. After the 1992 Olympics, Scherbo faced a lot of adversity. His wife slipped into a coma after a car accident, and he faced injuries and alcohol abuse as he struggled to cope with the struggles in his life. Despite that, he was able to make a comeback for the 1996 Olympics, where he won four bronze medals, and became a fan favorite for his triumph after facing so many challenges. As further recognition of his successful career, Vitaly Scherbo was inducted into the International Gymnastics Hall of Fame in 2009.

Nikolai Andrianov is the most decorated Olympic male gymnast of all time. He earned 15 Olympic medals, which is a record for male gymnasts. Despite not starting gymnastics until the age of 12, Andrianov was able to develop quickly under coach Nikolay Talkochov and was selected to the Soviet national team in 1970.

He won three medals in the 1972 Munich Olympics with a gold in the floor exercise, silver in team competition, and a bronze in the vault. Four years later, Adrianov dominated the Montreal Olympics with seven medals. He won gold in the floor, rings, vault, and all around. He also got silver in the team competition and the parallel bars, along with a bronze in the pommel horse. In the 1980 Moscow games, he came away with five more medals, receiving two golds, two silvers, and a bronze.

Along with his Olympic success, he captured 12 World Championship medals, including the all-around title in 1978. He won the European Championship eight different times, and he won the World Cup gymnastics competition three years in a row.

Andrianov is famous for innovating and moving the sport of gymnastics forward. In 1974, he introduced the triple summer dismount at the World Championships in Bulgaria. Andrianov was consistent, strong, and courageous. Competitor Bart Conner called him the “toughest gymnast I’ve ever seen”. While he may not have had the most talent, his consistency in every discipline is what led him to find so much success.

Sawao Katō was greatly admired for his originality and his level of refinement. His technical perfection and style is what made him a legend at such an early time in gymnastics. He was renowned for his self-discipline and dedication to the sport of gymnastics. Katō earned 12 medals in the Olympics, eight of which were gold.

Katō won the combined exercises and shared a gold as a member of the Japanese team at the 1968 games in Mexico City, despite facing an achilles tendon injury. He also won the gold in floor and a bronze in the rings. In Munich 1972, Katō won his second consecutive combined gold, won an individual gold in the parallel bars, and silver medals in the pommel horse and horizontal bars. In the 1976 Montreal Olympics, Katō once again excelled as he led the Japanese team to its fifth consecutive gold medal. He also won gold in the parallel bars and a silver in the individual combined.

Katō’s total of eight Olympic gold medals is more than any other male gymnast. Katō retired at the young age of 29, and went on to become a professor at Tsukuba University. In 2001, he was inducted into the Gymnastics Hall of Fame.

Nemov made his debut at the 1993 World Championships at the young age of 16. The following year, he put his name on the map when he won his qualifying session at the World Championship. His first ever major all-around title came at the Goodwill Games in Saint Petersburg, crushing his teammate Aleksi Voropov by over a point. In the 1996 Atlanta Olympics, Nemov won six medals (two gold, one silver, and three bronze). He was the leader of the Russian team that year as they went on to win their first ever Olympic Team title.

There were so many questions about Nemov’s talent level and commitment going into the 2000 Olympic Games in Sydney. He answered all his critics by winning the major all-around title, and took home a total of six medals. By the end of the Sydney Games, Nemov had won one medal in every discipline except for the still rings. This proved that Nemov had an all-around talent that so few gymnasts possessed at the time.

In the 2004 Olympics, Nemov was in the center of judging controversy after completing an extremely difficult maneuver on the high bar. He was severely underscored, leading the crowd and fans to critique the judges by telling them their scoring was incorrect. This controversy was a large part of the decision to reconstruct the judging system in 2006. Despite not winning a medal in 2004, Nemov was recognized for his great character, respect, and maturity during the situation. In 2017, Nemov was inducted into the International Gymnastics Hall of Fame.

Boris Shakhlin was an Olympic legend in his time as an Olympic gymnast representing the Soviet Union. Over the course of his career he amassed 13 total Olympic medals (seven gold, four silver, and two bronze), which was a record for male athletes from 1964-1980. Shakhlin may have further added to his medal count if not for a heart attack he suffered at the age of 35, which forced him into retirement. He was a legend in the Soviet Union, receiving high honors like the Red Banner of Labor and Order of Lenin for his Olympic triumphs. Shakhlin was a force to be reckoned with in the world of gymnastics, which resulted in his induction into the International Gymnastics Hall of Fame in 2002.

Takashi Ono is often an unsung hero in the world of men’s gymnastics. During his career representing Japan, he amassed thirteen Olympic gold medals, including five gold medals, which at the time was a record for male athletes across any sport. However, he would lose this record to Boris Shakhlin in the very same Olympics he achieved it. Ono’s longevity was a spectacular feat, competing in four renditions of the Summer Olympics and earning a medal in each one. The events he found the most success in were the team all-around (two gold medals) and the horizontal bars (two gold medals), however he also netted himself Olympic gold in the horse vault portion of the 1960 Olympics held in Rome.

Ono was an Olympic legend in his native Japan and abroad, receiving the honors of being the flag bearer for Japan in the 1960 Olympics and taking the Olympic Oath at the 1964 Olympics. He also went on to be immortalized in gymnastics history with his induction into the International Gymnastics Hall of Fame in 1998.

Who is the youngest men’s gymnast to ever win an Olympic gold medal in the individual all-around?

The youngest Olympian to ever earn a gold medal in the individual all-around is Daiki Hashimoto of Japan. He accomplished this feat at the age of 19, during the 2020 Olympic Games held in his home country. Hashimoto recorded a final score of 88.465, which narrowly secured him victory over Xiao Ruoteng of China. Accomplishing such a feat as becoming the youngest ever gold medalist in an Olympic event is remarkable enough as is, but to earn this distinction in one’s home country is all the more special.

What is the record for most career Olympic gold medals won by a men’s gymnast?

What men’s gymnast holds the record for the most Olympic medals in the individual all-around?

In this type of discussion, the contenders each feature great skill, and more importantly, longevity. The record for the most Olympic medals earned in the men’s Olympic all-around event belongs to Sawao Katō and Kōhei Uchimura, who each have two gold medals and one silver medal to their name. Each of these spectacular gymnasts represented Japan in the Olympic Games, reaching heights no men’s gymnast has ever reached before. Katō took the gold for the men’s all-around in 1968 and 1972, while Uchimura was a more recent two time champion in 2012 and 2016. Meanwhile, Katō earned his silver medal in the 1976 Olympic Games while Uchimura was the runner up in 2008.