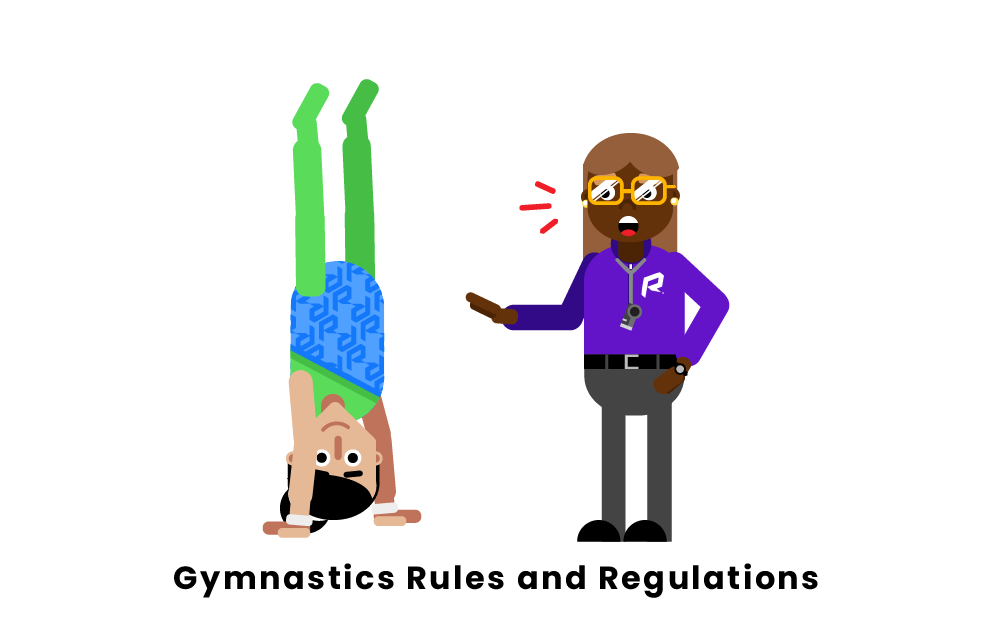 In gymnastics, athletes are challenged to perform routines on several unique apparatuses, being scored by a panel of judges on each of their routines. Athletes can either compete as a team or an individual, and the athlete with the highest score is the victor.

The sport has its roots in Greece during the strength and agility components of the early Olympic games. Since then, gymnastics has evolved greatly, including the addition of unique apparatuses and the institution of more complex scoring and guidelines.

In recent Olympic competitions, the United States has been a strong competitor, along with the Russian Federation, China, Great Britain, and Japan. Every Summer Olympics, athletes compete as a national team and as individuals to win medals.

The Rules of Gymnastics

In order to watch and participate in gymnastics, you'll need to understand the rules of the sport. The most basic rules surround the apparatuses, scoring, event formats, and fouls and penalties. 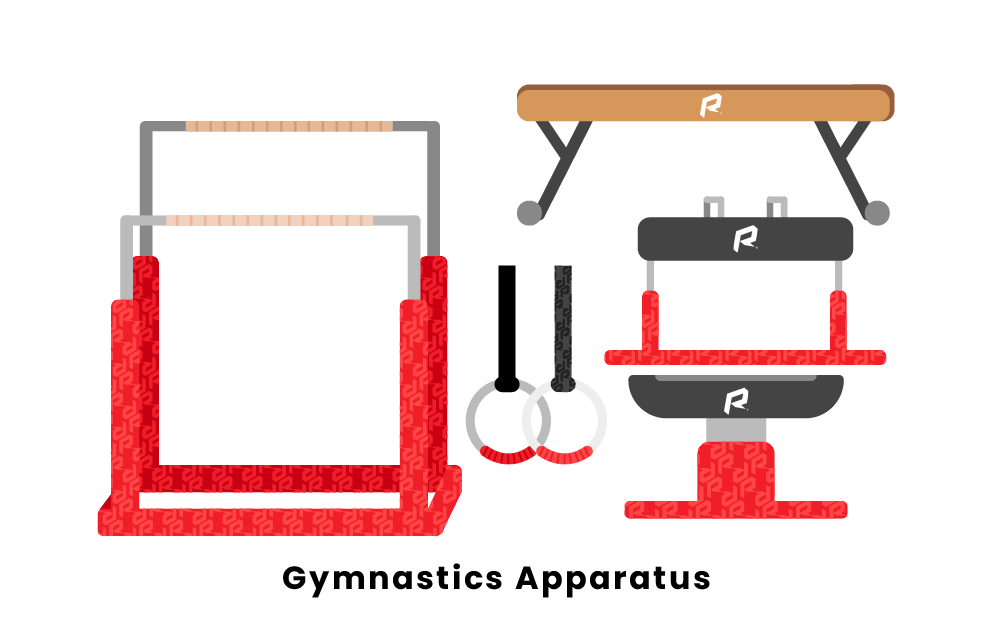 In men's gymnastics, athletes compete on a total of six apparatuses. They are the parallel bars, the high bar, the rings, the pommel horse, the floor, and the vault. Each apparatus comes with unique skills and challenges. Athletes can either compete on all six, called the all-around, or specialize in a select few.

Women's gymnastics has fewer apparatuses than men's, only including uneven bars, beams, floors, and vaults. Again, each apparatus presents unique challenges and requires a variety of skills to succeed. Female gymnasts can also compete in the all-around or as specialists. 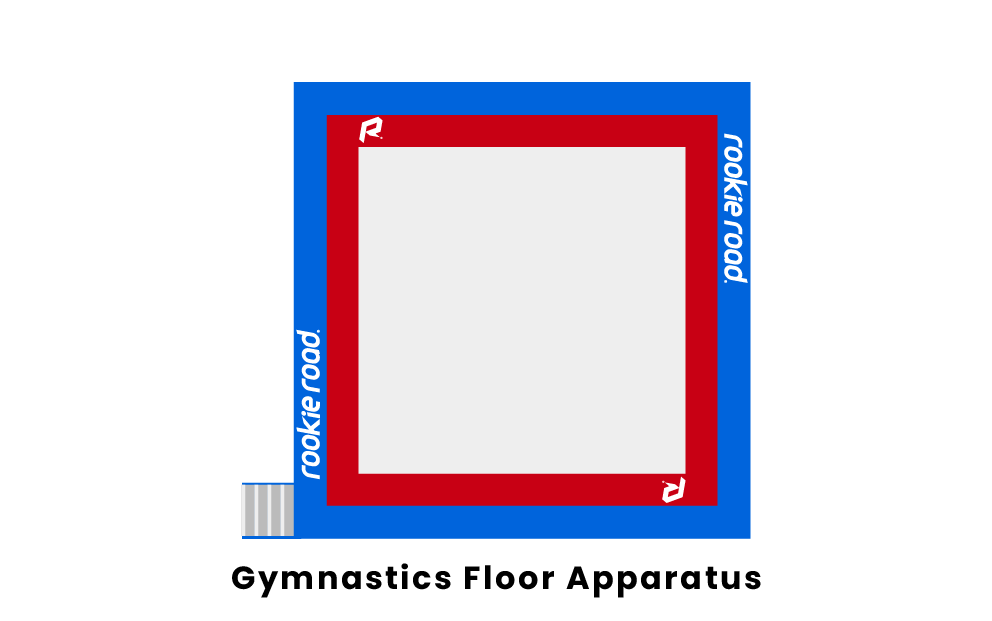 The floor is a 40 ft by 40 ft apparatus consisting of a soft pad on top of springs, allowing the athlete to complete choreographed routines consisting of tumbling passes and other acrobatics. The routines require strength, rhythm, and coordination. Athletes are scored on their form, landings, and performability. Their routines are timed to last no longer than ninety seconds and are set to the music of the athlete's choice. 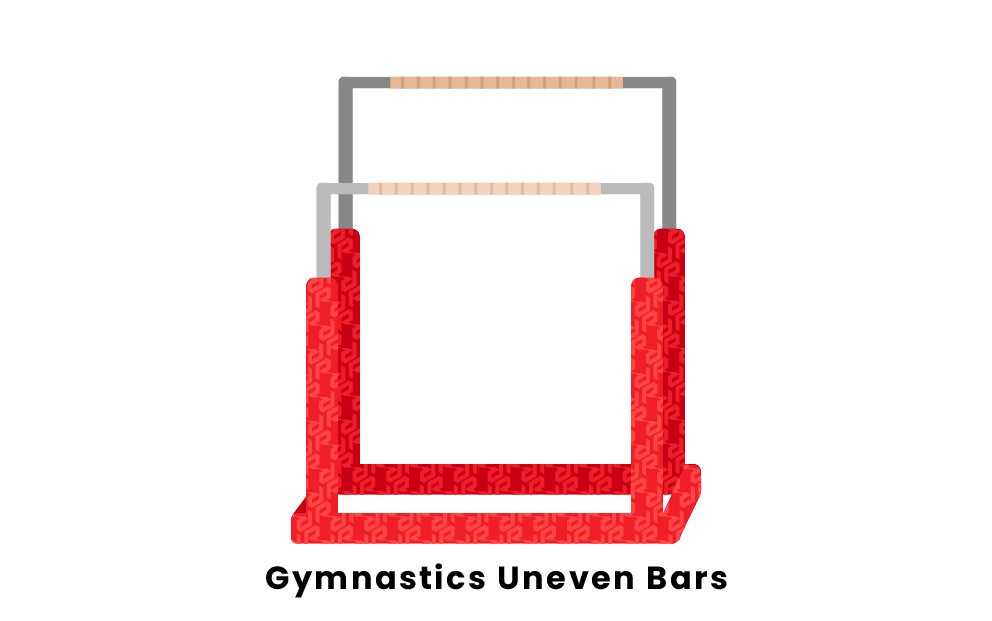 The uneven bars are a set of bars only performed in women's gymnastics, suspended by thick wires and tethered to the floor. They can be adjusted based on athlete preference, but one is always higher than the other, allowing the athlete to transfer from one bar to another. Athletes are scored on the completion of skills, form, and their landing. This apparatus requires ample core strength and a good rhythm as the athlete moves between and around the bars. 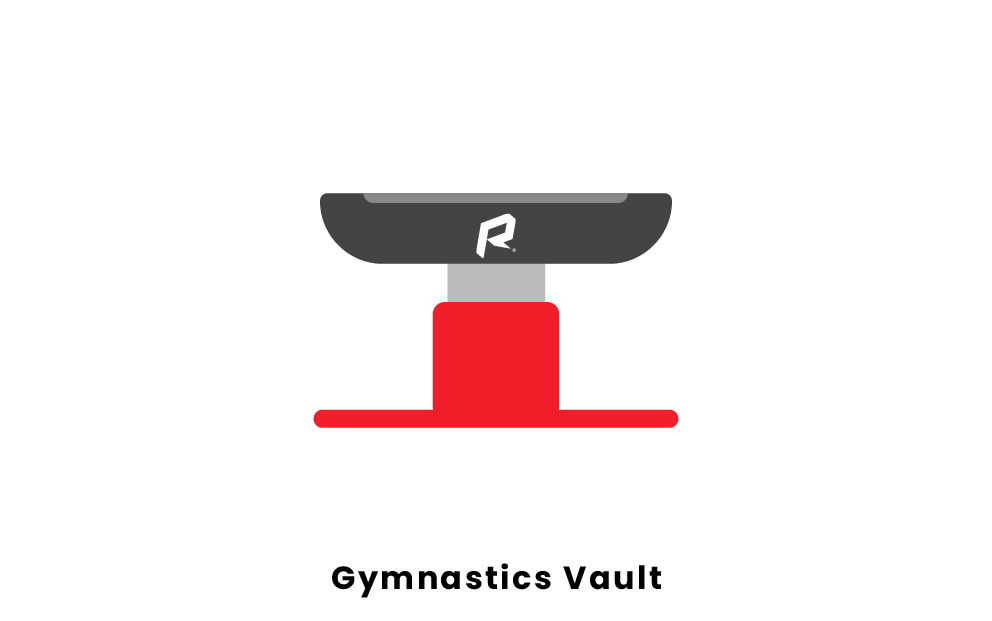 The vault is performed in both men's and women's gymnastics. Athletes have a runway that leads up to the vaulting table, giving them time to accumulate power and speed on their run. Athletes then propel themselves over the table and onto the landing mat behind it. They are scored on the form throughout and their landing position on the mat. This apparatus requires speed, strength, and power to propel the athlete over the table high enough to perform flips and twists in the air. 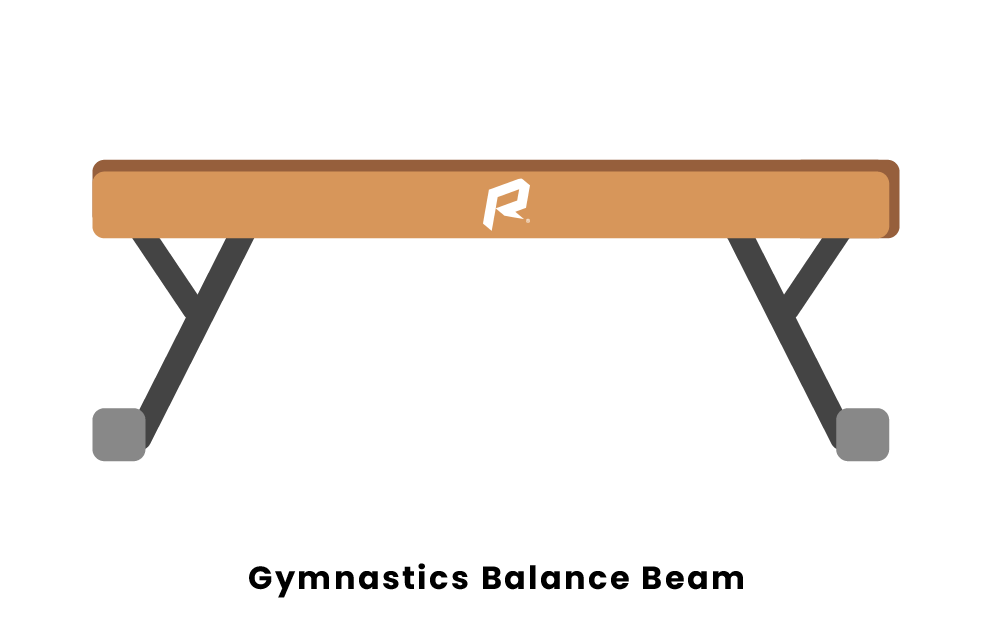 The balance beam is only performed in women's gymnastics. Athletes must balance on a four-inch wide, 16-foot long padded platform four feet off the ground, and perform a combination of turns, leaps, tumbling, and choreography. Their routine is limited to ninety seconds, and they are penalized if they wobble, grab the beam for balance, or fall off of the beam. Athletes must have strong balance and the ability to perform skills in a straight line. 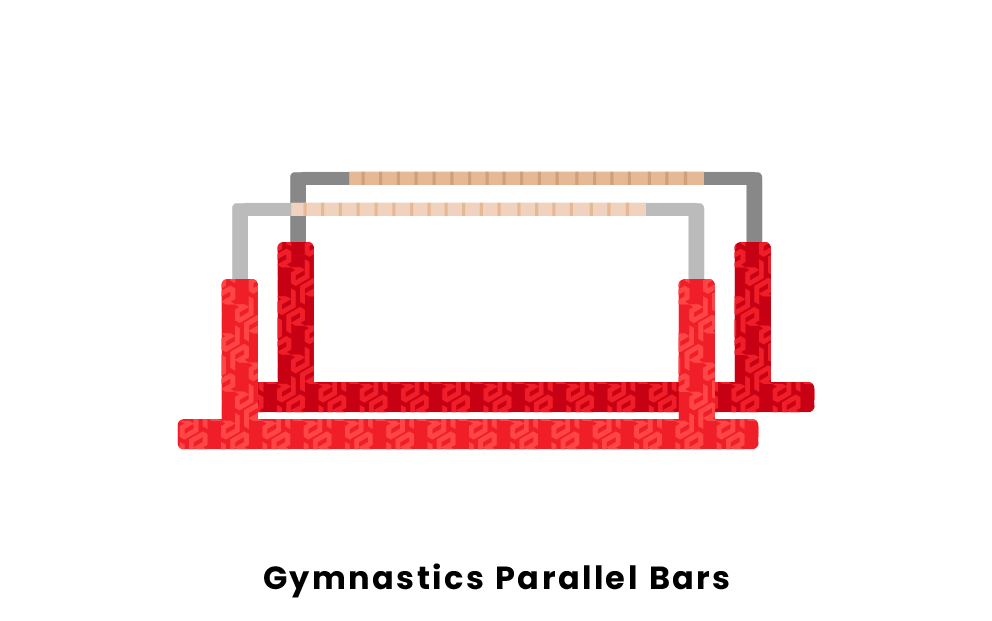 The parallel bars are only performed in men's gymnastics. The apparatus consists of two 11-foot bars approximately six feet off the ground and 16-20 inches apart. Athletes must swing between and above the bars, performing turns and flight elements where they release their hands from the bar and recapture it in a different position. This apparatus requires hand-eye coordination and core strength, as athletes must make sure they can grip the bars and that their bodies stay between them. If they hit the bar during a skill, points are deducted. 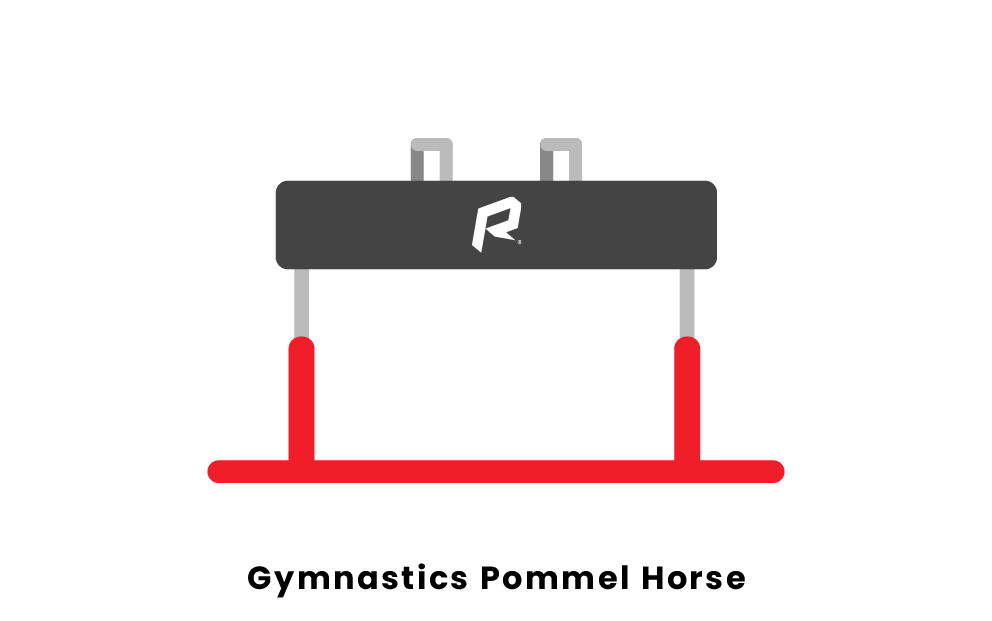 The pommel horse is only performed in men's gymnastics. It consists of a rounded table just under four feet off of the ground with two handles toward the middle of the table. The table is 5.25 feet long and 13.8 inches wide. Athletes must swing their bodies in a circular motion above the table, making sure not to hit their legs against it and lose their rhythm. Athletes must use core muscles and momentum to keep their bodies above the table and are penalized if they come into contact with the table or fall off. 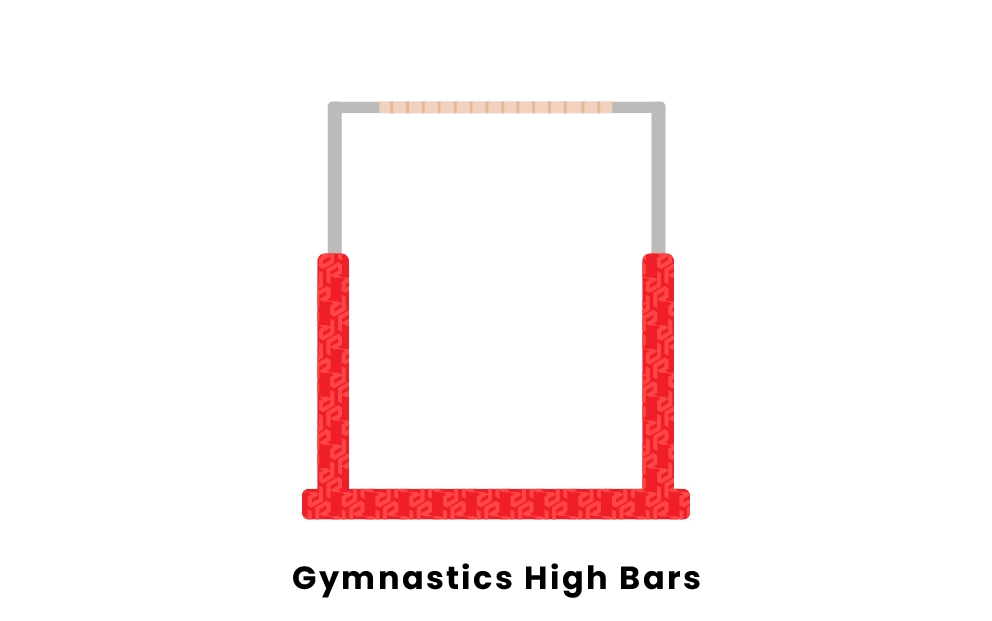 The high bar is another apparatus that is only used in men's gymnastics. Approximately nine feet off the ground, athletes must swing their bodies fully around the bar, adding combinations of releases and turns. Athletes must have good hand-eye coordination so that after they release from the bar, they can grab it again and not fall. This apparatus requires a lot of core muscle and grip strength. Athletes are scored on their ability to complete release moves, their form, and their landing. 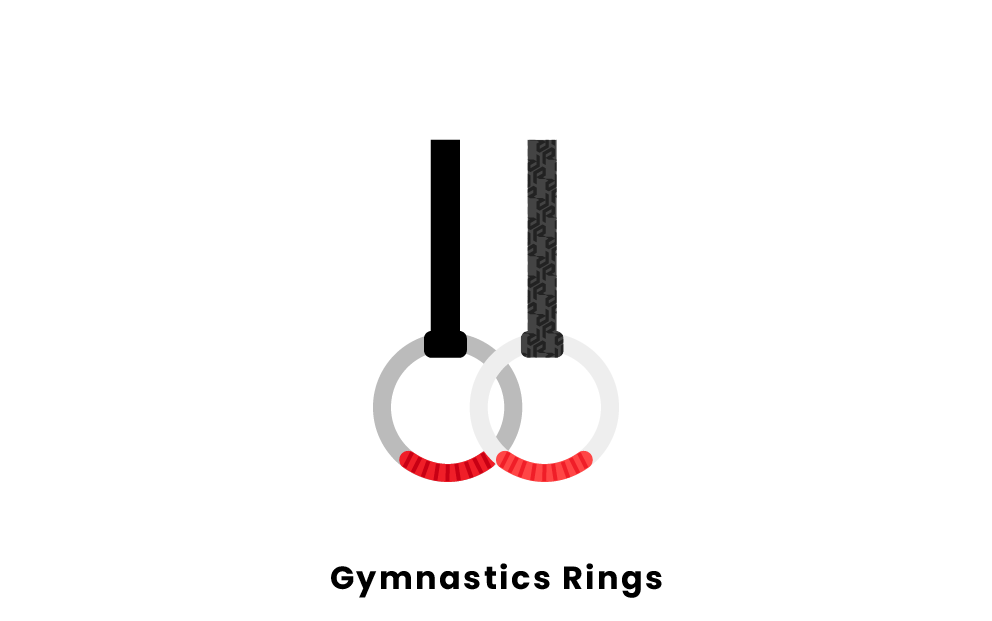 The rings are also an apparatus for men's gymnastics. Suspended approximately 10 feet off of the ground, athletes must hold themselves up by using two rings. They will perform both moving and still skills where they must rotate their wrists to avoid getting stuck in the rings upon rotation. They are scored on their form in both moving and still skills, their ability to hold still skills for at least two seconds, and their landing. This apparatus requires strong upper body strength and core strength, as well as grip strength.

There is often also a team competition where three athletes from a team will compete on each apparatus, and their scores are added together from all apparatuses. Again, the team with the highest total score is awarded first place. 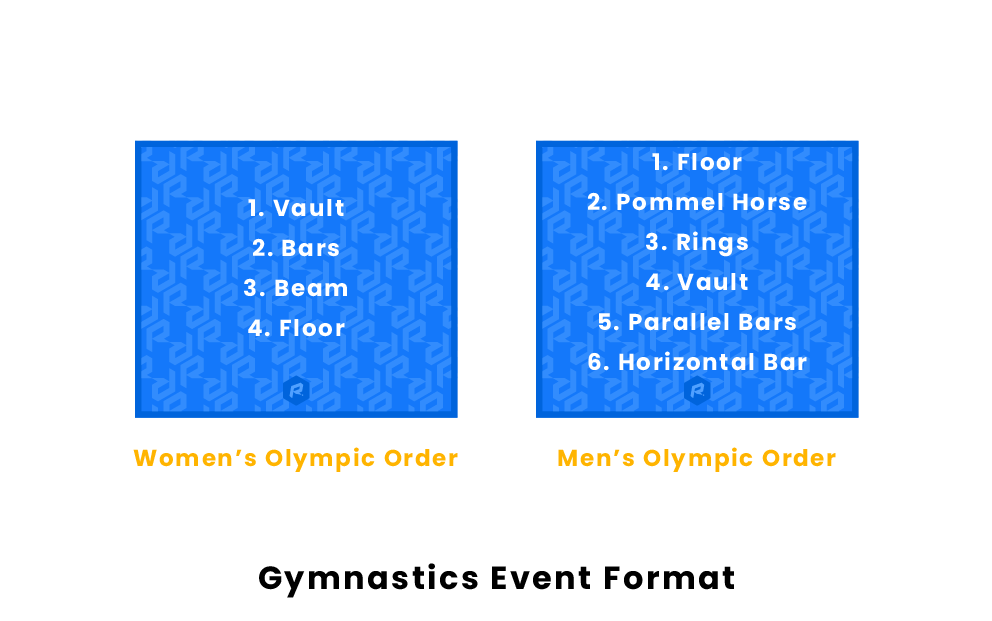 Athletes compete on one apparatus at a time, with several groups performing on different apparatuses at once during a meet. Once every group member has competed on the apparatus, the groups will rotate to new apparatuses. For women, the Olympic order is vault first, followed by bars, beam, and, finally, floor. For men, the rotation order is floor first, then pommel horse, rings, vault, parallel bars, and high bar. Sometimes a group will start on an apparatus that is not at the beginning of this order. In this scenario, they will continue in the same order, eventually competing at all of the different apparatuses. 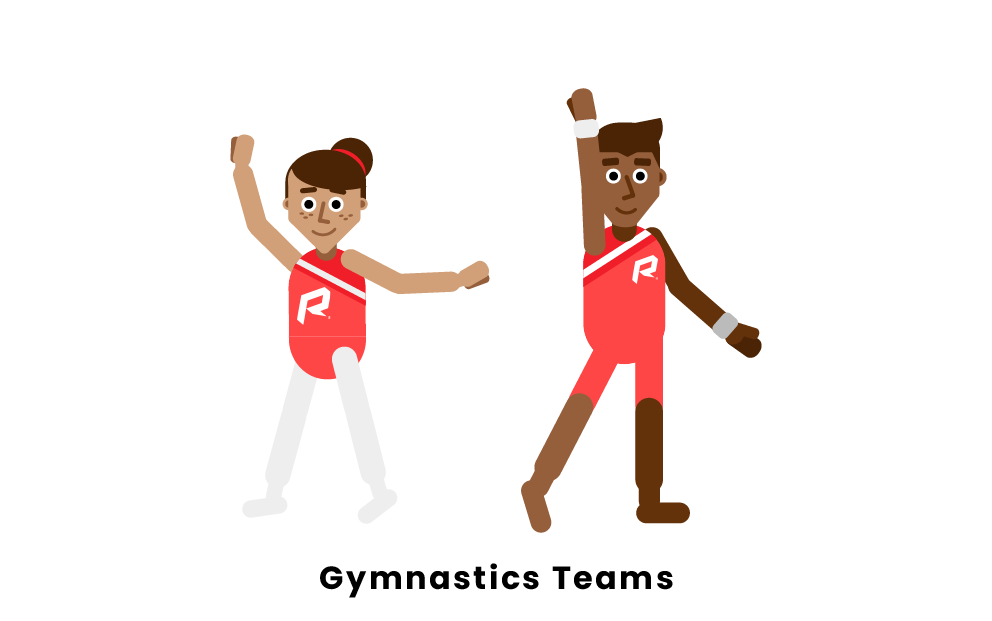 Gymnasts can either compete as an individual or as a team. Teams of four compete for the highest overall score across every event, with the three athletes who participate in each event adding their scores to the total. For individual gymnasts, contestants can either compete in one event at a time or compete in the all-around, where they total their scores for each event. These competitions happen separately from one another, with the order of competitions proceeding as follows: team event, all around, and then the individual event competition.

In each event, gymnasts are scored by a panel of judges. Each panel member gives their scores, which are averaged to get the athlete's final score. In elite or professional gymnastics, athletes are scored both on difficulty and execution. Below is an example of a possible score an athlete could receive.

Penalties in gymnastics are taken from an athlete's execution skill. These penalties can come from a fall from an apparatus or a step out of bounds. If athletes step out of bounds either on the floor or vault, one-tenth of a point is deducted for one foot and three-tenths of a point for two feet. On beam, grabbing the beam for balance leads to a deduction of half a point. For falling off of any apparatus, a full point is deducted from the athlete's score.

How do you score points in gymnastics?

In gymnastics, each athlete will receive two scores for each run, one for difficulty and the other for execution. One panel of judges scores difficulty while the other scores execution. The difficulty score measures the difficulty of the skills performed, credit for connecting skills together, and the element group requirements. Each skill in gymnastics is assigned a value, so the difficulty score will be the sum of the values for the 10 most difficult scores, added with connection points and element group points. The execution score accounts for execution, artistry, and technique. Execution scores start at 10 and points are deducted each time an error or fault in technique is made. The total difficulty and execution scores are then added together to calculate the gymnast's final score.

When did gymnastics scoring change to become the current system?

The International Gymnastics Federation changed the scoring system in 2006 to what it is today. Prior to 2006, men's and women's gymnastics routines were scored out of a 10-point scale. If a gymnast performed a perfect routine with no point deductions, they scored what was referred to as a "perfect 10". In the new scoring system used today, gymnasts receive two scores, one for difficulty and one for execution. Those two scores are then added together to determine a gymnast's final score for each routine.

What was the highest score given in gymnastics at the Olympics?

The highest recorded gymnastic score in Olympic competition was achieved by Nastia Liukin at the 2008 Beijing Olympics. She received a score of 16.900 during the team event on the uneven bars, which is extremely rare. Liukin's performance helped team USA take home the gymnastics team event's silver medal in 2008, barely losing to China.