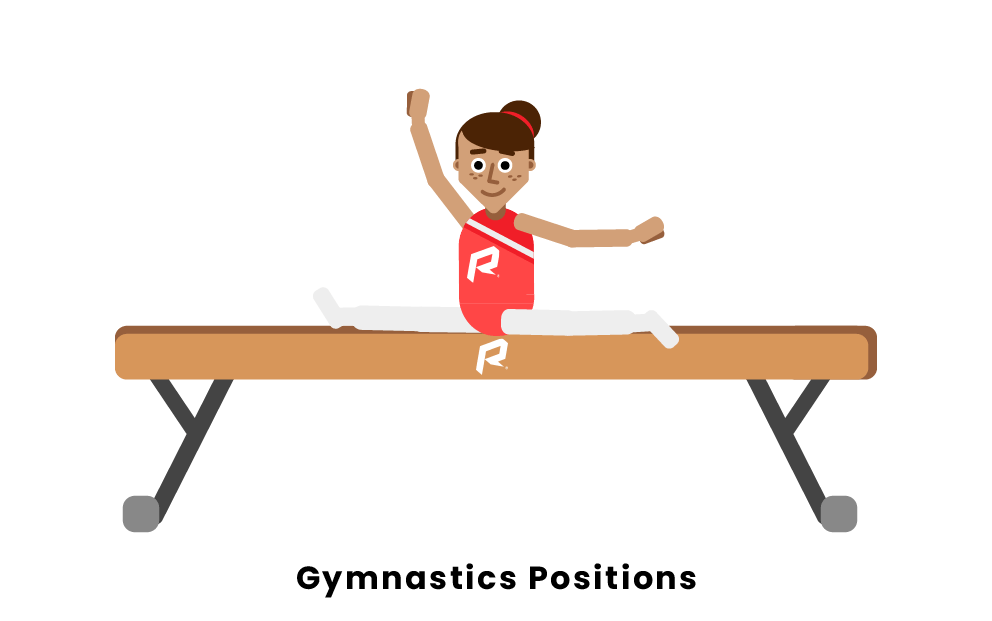 The basic positions in gymnastics are the arch, pike, tuck, straddle, hollow, and lunge. While these aren’t all of the gymnastic positions, they are the basic body positions taught to a person trying to learn gymnastics. Regardless of a person’s age or skill level, the first three positions they will be taught are pike, straddle, and tuck positions. 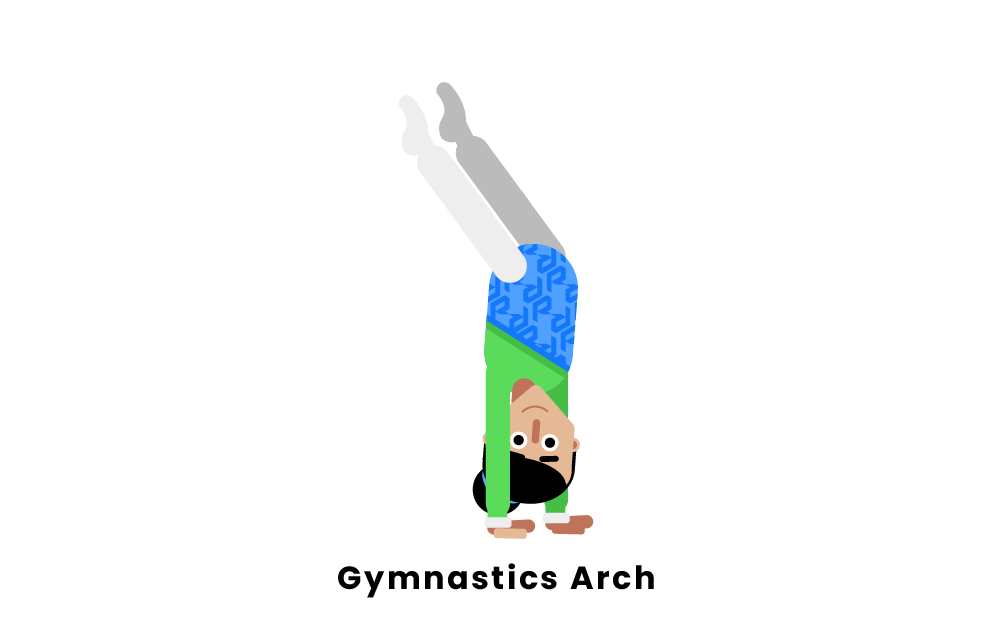 The arch is a commonly used position in a few different gymnastics moves. In order to be in an arch position, the gymnast must be standing on their hands and have their feet extended and behind their head. This creates an arch formation with the back while the chest is protruding outward. This position is commonly performed during a back handspring and during floor dance routines. 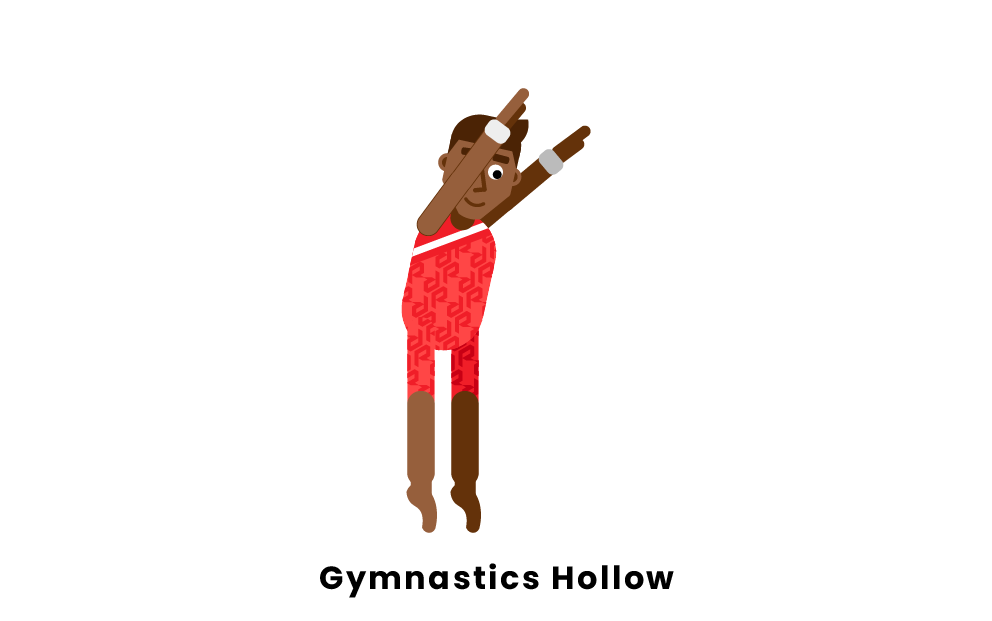 The hollow position is essentially the exact opposite of the arch. In this move, the gymnast tucks in their core and squeezes their legs while they are fully extended. They also fully extend their arms while squeezing them against their ears. This move differs from the arch because the gymnast is upright and arches their back out instead of in. Like the arch, the hollow is another commonly used position. 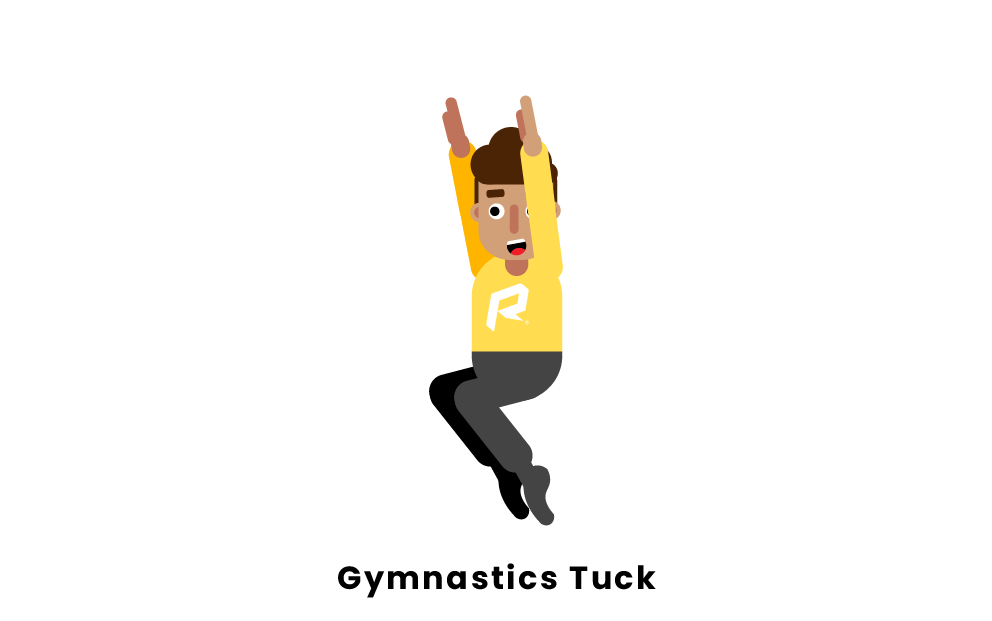 The tuck is arguably the most common position in all of gymnastics. It is used in virtually every gymnastics event. This move involves the gymnast bending their knees and tucking them into the chest. The tuck allows the gymnast to flip or somersault much faster and is an essential skill to learn. The cowboy tuck and open tuck are a few variations of this position. 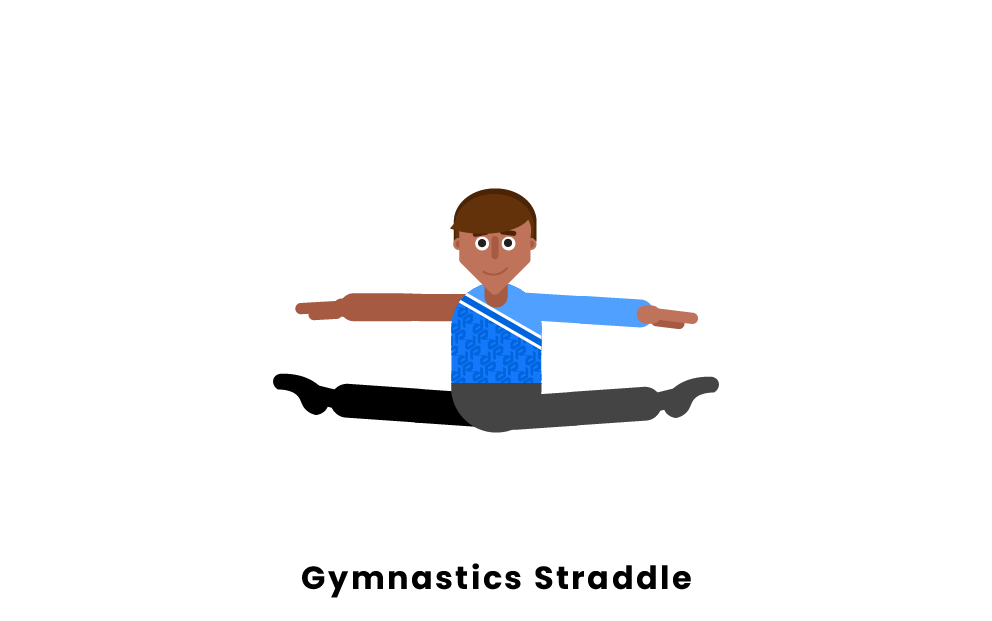 A straddle is a form of gymnastics jump in which the gymnast launches themselves into the air, sometimes while on a balance beam, and spreads their legs to each side at a 180-degree angle. This should resemble a split but in mid-air. A gymnast can perform various types of straddles, with moves like 1/2 turn or full turn straddles serving as some of the more challenging straddle moves. 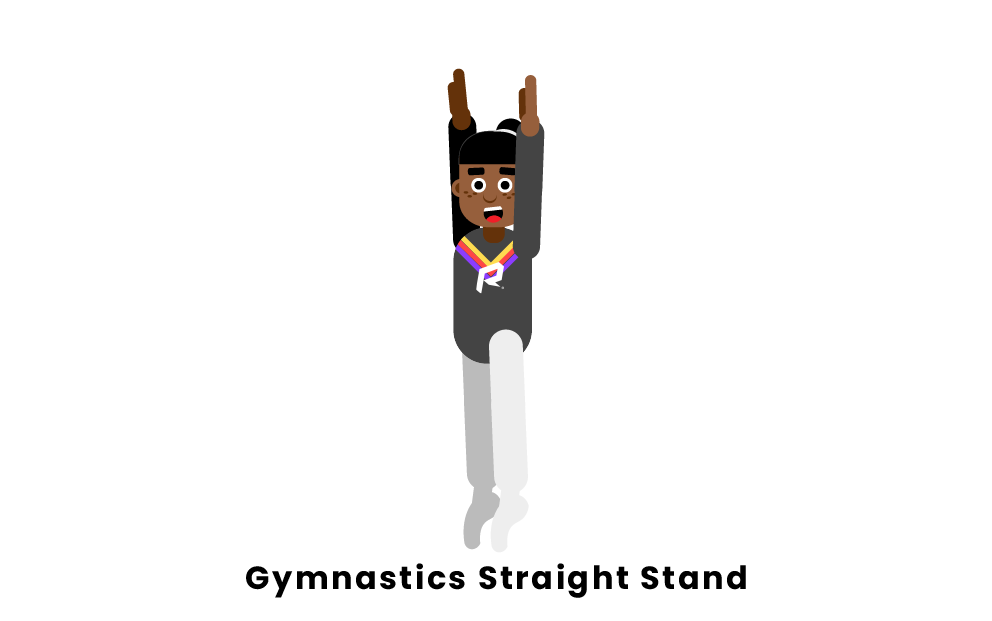 The most important position in gymnastics also happens to be the one that is the most often used in gymnastics. That position is the straight stand, also called the straight body position, which is used in every event in gymnastics, making it the most important to master. In order to perform a straight stand, a gymnast needs to stand with your bottom squeezed, have your hips tucked under you, keep a tight core, and have your arms straight by your ears. This position is seen in most events as the start of different events or in the landing on dismounts. Thus it is important to master to get the best score possible on any given event in which it is used. 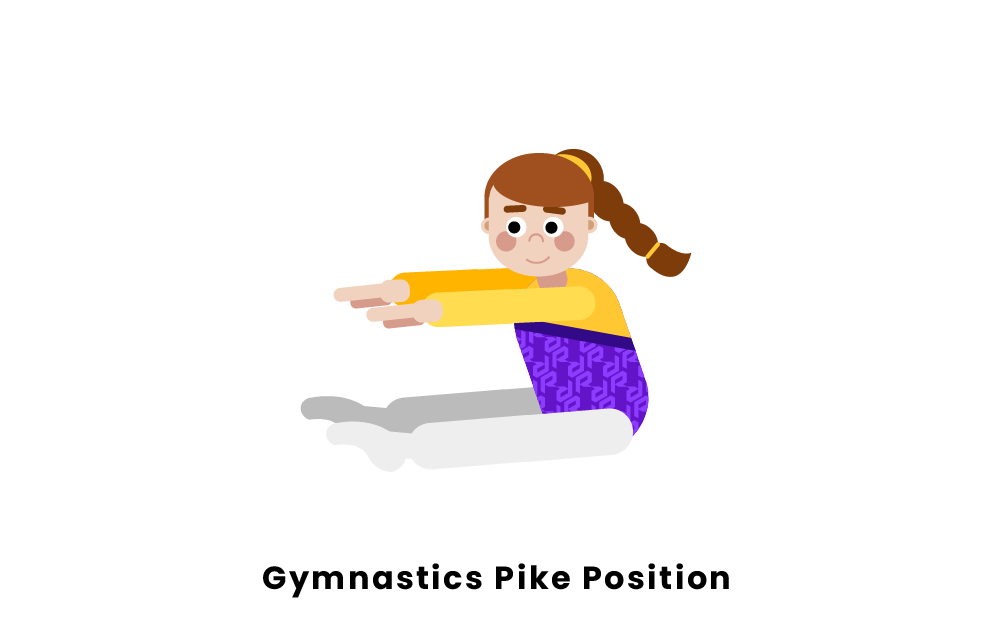 In gymnastics, lunges are the movement that comes at the end of most acrobatic skills on the floor and beam events. A lunge is a movement that you will typically land in out of a handstand, cartwheel, front walkover, back walkover, and many other gymnastic moves also. The most important part of the form for a lunge is for your back leg to be straight with your front leg bent. Furthermore, while you are performing a lunge, you also need to squeeze your bottom and core with your arms straight and right by your ears. Having a good lunge is important on the beam event as it is hard to land moves on the small beam. Additionally, you have to make sure you have good form to maintain your balance. 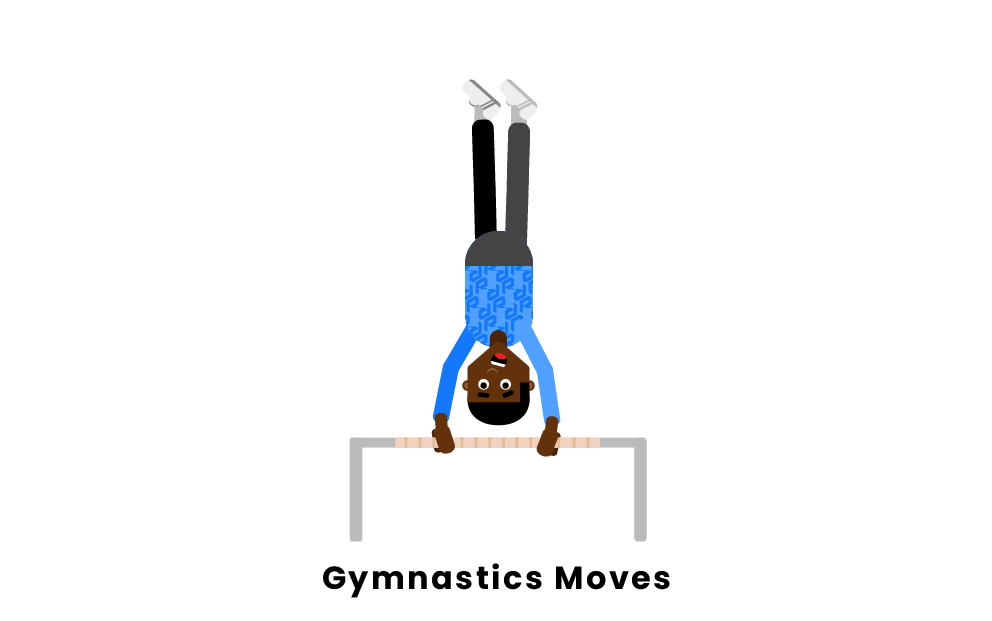 There are lots of different gymnastics moves for each event, and more are being added every year as gymnasts push to new heights in the sport. On the floor event, there are 14 moves that are common to see. These moves include the Back Handspring, Front Handspring, Front Walkover, Back Walkover, Somersault, Backward Somersault, Roundoff, Cartwheel, Aerial Cartwheel, Aerial Walkover, Straight Jump, Scissors Leap, Split Leap, and a Cross Handstand. Then for the Balance Beam, many of the same floor moves are used, but four, in particular, are emphasized. These are the Front and Back Walkovers, the Front and Back Handsprings, Split Leaps, and Saltos, which involve total body rotation around an imaginary axis and include moves such as Aerial walkovers and Cartwheels. On the vault, there are fewer gymnastic moves done, but there are still six moves that are commonly seen, and five of which are moves named after a gymnast. These include the Front Handspring, the Yurchenko, the Amanar, the Tsukahara, the Produnova, and the Chusovitina. Lastly, there are the moves done on the Uneven Bars, which require strong upper body strength. These moves include the Hip circle, the Kip, and the Flyaway.

The hardest move in gymnastics is arguable, but one of the rarest moves is the triple-double on the floor event. The triple-double is a move in which the gymnast does a double backflip with three twists in it. This move is so difficult that it has only ever been done by one woman ever in gymnastics, Simone Biles. It is so difficult, in fact, that even in men’s gymnastics, it is extremely rare and has only been done a few times. Furthermore, most women can’t even do a double-double, so the fact that Simone Biles didn’t just attempt it but actually finished the move is extremely impressive. Watching her perform the move, you can see the extreme difficulty and athletic ability it takes to do it and land it successfully.

Simon Biles is already arguably one of the greatest female gymnasts ever, winning numerous Olympic gold medals and world championship gold medals. With all of her accomplishments and amazing performances, she has become a fixture of gymnastics and is so ingrained in it that she has now had multiple gymnastics moves named after her. After the 2019 World Championship, Simone Biles now has a total of four different gymnastic moves named after her. In the 2020 championship, she added both the double-double dismount on the balance beam and landed a triple-double in the floor routine. These two moves are now known as the Biles and the Biles II and are some of the most difficult gymnastic moves we have seen. Biles is already regarded as one of the greatest gymnasts ever with 20 World Championship medals, and these moves named after her just confirm how talented and impressive of an athlete she is.

What are illegal gymnastics moves?

Illegal gymnastics moves, as the name suggests, are maneuvers in gymnastics that are banned for one reason or another. Oftentimes, these moves are banned because they are deemed dangerous to the competitor, and event organizers do not want to see competitors get hurt attempting to perform these extremely challenging moves. One example of an illegal gymnastics move is any tumbling pass that ends in a forward roll. This sequence was banned in 1992, as regulators deemed that the move carried serious injury risk due to the move’s reliance on a gymnast landing into a roll on their upper back and lower neck. There are a number of other banned moves, and this is just one noteworthy example.

What gymnastics moves are best for beginners?

There are a fair few different gymnastics moves that are best for beginners. Some of the best include cartwheels, forward rolls, and handstands. These moves minimize the risk of injury while also providing a simple approach that new gymnasts can attempt to replicate with relative ease. Additionally, they help train gymnasts in some of the basic skills found in gymnastics. Once these basics are mastered, common positions for beginners to start with are the pike, straddle, and tuck.

What are some of the most difficult gymnastics moves?

Professional gymnasts feature an uncanny acrobatic ability, meaning certain moves can prove extremely difficult for the average person. Amongst all the moves found in gymnastics, the Biles I and Biles II are easily some of the most challenging. These moves were popularized by legendary gymnast Simone Biles, one of the best to ever participate in the sport. She is known for her tremendous skill and ability to do the seemingly impossible, so we wouldn’t recommend attempting these moves without substantial practice with simpler moves beforehand.