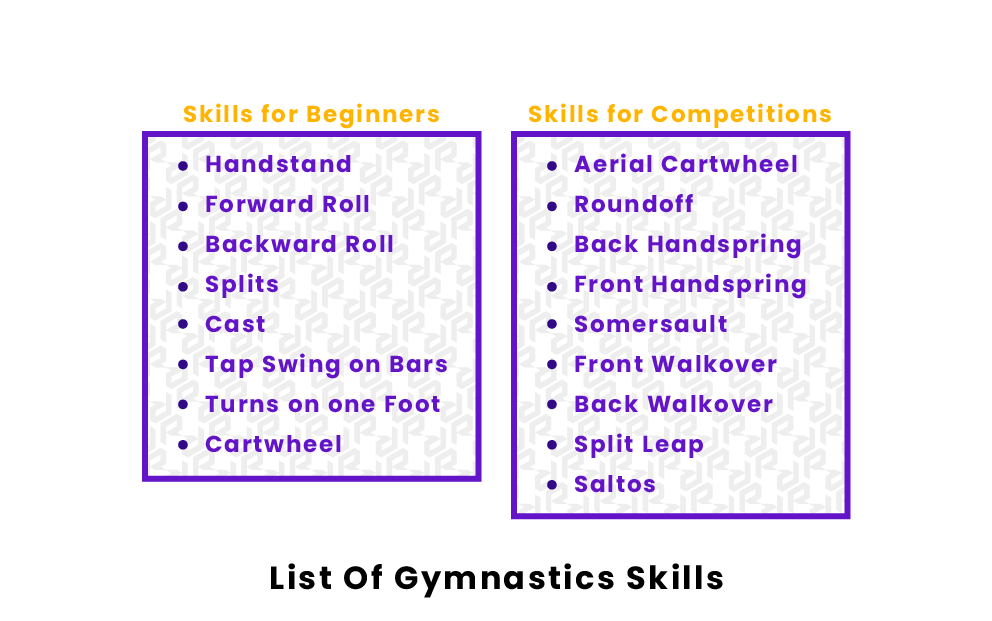 Gymnastics requires its participants to possess incredible strength, flexibility, and balance to be successful. Gymnasts compete in events such as the floor, the balance beam, and the vault, all of which require various skills to perform the necessary maneuvers. Here is a list of the basic skills that are needed to compete in gymnastics.

These skills provide the foundation for gymnasts to learn more advanced techniques and maneuvers. If you’re new to gymnastics, make sure to master these skills before exploring the rest of the sport.

The handstand is one of the most important skills in all of gymnastics. The handstand is an essential skill for gymnasts to master because it is the key building block for other skills. Handstands are used in most tumbling skills and are important when performing moves on the bars. To perform a handstand, a gymnast would start with a tall stance with one foot in front of the other. They would then reach for the ground and extend their legs into the air with their feet pulled close together while their body is vertical and upside down.

This is the opposite of a forward roll. To perform a backward roll, gymnasts squat on their heels, sit on the floor, roll backward, then push off the ground and elevate themselves into a standing position.

This maneuver requires the gymnast to fully spread their legs either sideways or front-to-back so that their whole lower body is in contact with the ground. Splits are commonly used in gymnastics as part of a series of maneuvers. For instance, split leaps, jumps, and switch leaps all require that the gymnast know how to perform a split.

Casting is one of the most basic bar elements and requires the gymnast to place their body on the bar in a semi-plank position with their back slightly rounded and their stomach pulled in. When performing a cast, gymnasts must make sure that their legs are straight and together and that their eyes are looking at the bar. Learning how to properly cast allows gymnasts to perform other maneuvers well.

The tap swing is a swing on uneven bars in which the gymnast briefly lets go of and then re-grips the bars. This skill is a basic building block for most gymnastics bar routines.

Turns on One Foot

This skill is used in nearly every element of gymnastics. It is the pivoting of a single foot on either the beam or the floor. The ability to turn on one foot is essential for gymnasts to be able to pull off successful floor and beam routines. On its own, this skill may not seem very impressive. But when used in combination with other maneuvers, it is absolutely essential.

The cartwheel is another foundational skill that provides the basis for gymnasts to be able to perform more advanced techniques. This move is essentially a sideways rotation of the body in which the gymnast starts in a standing position and moves sideways with their hands on the floor and their legs in a split position. The cartwheel is completed when the gymnast has finished the rotation and returned to a standing position.

This is when a gymnast performs a cartwheel in midair and avoids touching their hands to the ground in the process. The aerial cartwheel is also known as the side aerial or simply the aerial.

This move, also known as a front aerial, is a mix of an aerial cartwheel and a front walkover. You complete a full revolution in the air, but you tumble forwards at the end instead of sideways, as you would in a cartwheel.

This skill is similar to the cartwheel, but it involves a half rotation and a brief pause in the handstand position before springing back to the original standing position. The roundoff is one of the most important skills a gymnast can learn.

This is a key move that involves a backward flip into a handstand position where your legs kick over and back into the original standing position.

The forward handspring is essentially the same as the back handspring. The only difference is that the gymnast gets a running start and moves forward instead of backward.

This skill is similar to a front handspring, but unlike the handspring, a walkover requires that the gymnast’s legs move one after the other in a fluid motion. To perform a front walkover, a gymnast would lift their legs above their torso in a back bridge position and fully rotate their legs so that they return to their original standing position. In some ways, the front walkover is a hybrid of a cartwheel, a handstand, and a roundoff.

This is simply a reverse of the front walkover. It is the same fluid motion but in the opposite direction. Both the front and back walkovers are commonly performed on the balance beam.

A split leap is simply a split performed while leaping forward into the air. It is a combination of a split and a forward jump.

A salto is a move that requires complete body rotation around an imaginary axis. This is a skill commonly put on display when performing beam routines. Double saltos and triple saltos are especially difficult to pull off and can result in a higher score if done correctly.

A scissors leap is a forward leap where the gymnast jumps forward and swings their legs in the air, mimicking the motion of scissors. It starts by leaping and swinging one leg slightly forward before pulling both legs apart and performing a split midair. This is also known as a switch leap.

What are the basic skills in gymnastics?

The basic skills of gymnastics are core muscle strength, a wide range of motion, and the ability to balance with precision. To lift your body on the beam or on the floor, often using only one’s hands, you need an incredible amount of physical strength. Working out will build that skill. To complete splits or other moves that bend and stretch your body, you also need to be very flexible. The final key skill here is balance because moving and pausing on a thin beam requires precision.

What are the most important attributes for gymnasts to have?

The most important attributes for gymnasts to have are flexibility, strength, balance, and coordination. Flexibility is vital to performing the moves and elements that are evaluated in gymnastics routines; it makes skills like splits, handsprings, and walkovers much easier. Strength is required for gymnasts to hold their positions during routines, which are necessary for scoring points. Balance is essential for apparatuses like the balance beam, uneven bars, parallel bars, rings, and pommel horse. Lastly, coordination is needed to link skills together and avoid mistakes while performing.

What are the easiest gymnastics skills?

The easiest gymnastics skills are the handstand, the forward roll, the backward roll, and casting. These are often the first skills taught to athletes just beginning in gymnastics, and they are also basic building blocks for other more complicated maneuvers and often function as transitional moves during more complicated routines.

What is casting in gymnastics?

Casting is when a gymnast places their body on the bar in a semi-plank position while keeping their back slightly rounded and their stomach pulled in. To properly perform a cast, your legs must be straight together, and your eyes must look at the bar. Casting is an essential building block for doing many other maneuvers in gymnastics.