SportsGamesActivitiesGolfGolf EquipmentGolf LingoGolf PenaltiesGolf QuestionsHas A Golfer Ever Won All The Majors In The Year?How Can I Play A Round Of Golf At Augusta National?How Do The World Amateur Golf Rankings Work?How Do You Qualify For Champions Golf Tour?How Does Golf Betting Work?How Does Rating And Slope Work In Golf?How Does World Ranking Work In Golf?How Far Can You Hit The Ball With A 3-iron In Golf?How Good Or Bad Is A Bogey In Golf?How Is Pitching Different From Chipping In Golf?How Much Does A Yearly Golf Membership Cost?How Much Does It Cost To Play A Round Of 18 Holes Of Golf?How Much Money Does A Golf Caddy Make?How Much Time Does It Take To Play A Round Of 18 Holes Of Golf?How To Spin A Golf Ball Backwards On The Green?Is Golf A Good Workout?Is Golf An Olympic Sport?What Are The Kinds Of Golf Stances?What Are The Majors In Golf?What Club Is Used For Chipping In Golf?What Do Golf Caddies Do?What Happens If You Lose Your Golf Ball?What Is 3 Ball Better Ball In Golf?What Is 4 Ball Format In Golf?What Is A 6 6 6 Golf Tournament?What Is A Good Score In Golf?What Is Better Ball Format In Golf?What Is Foursomes Golf Format?What Is The Best Grip For Playing Golf?What Is The Cut Line In Golf?What is Golf?When Do You Move Up Or Down A Tee In Golf?When Should You Use Each Golf Iron?Who Created Golf?Why Are There 18 Holes In Golf?Why Does Golf Cost So Much?Why Is It Called A Bunker In Golf?Golf RulesGolf TournamentsGolfersLearn Golf
Home>Sports>Golf>Golf Questions
PreviousNext

What Is The Cut Line In Golf? 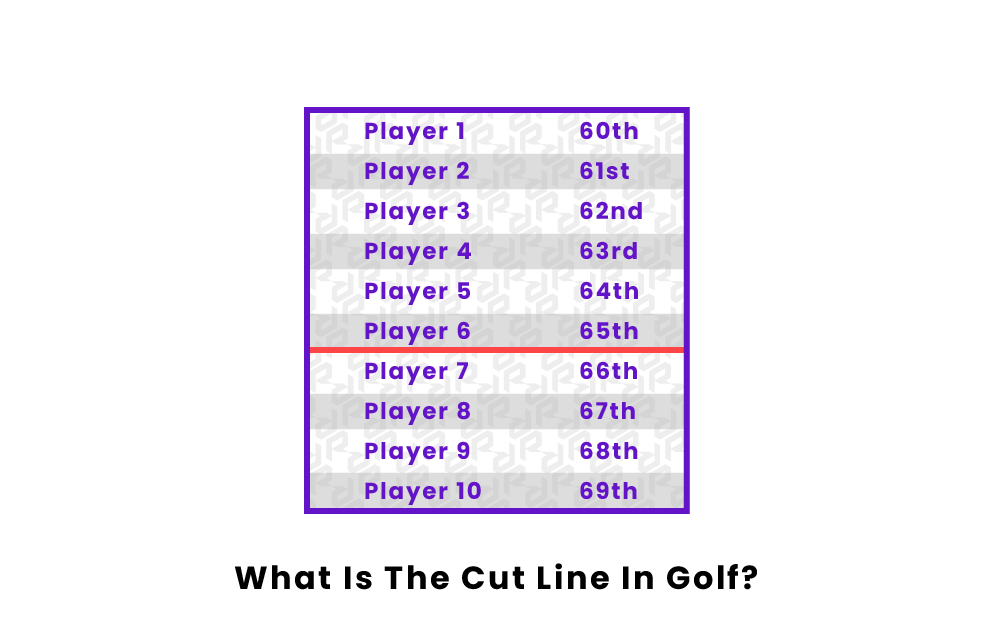 The cut line is the score that represents the golfers that are still playing and golfers that have been cut from the overall tournament itself. For example, in a six-player tournament, there may be a cut after the first three rounds. The cut would send the bottom half of the six home, while the other three would stay and continue to compete. The cut line itself is the score that a player must have or be above in order to stay and continue competing.

How Is The Cut Line Determined?

If you qualify for a tournament, you have to play during the work week hours, which include both Thursday and Friday. Both of these work week days are used to determine the rankings going into the tournaments. After two rounds, the typical standard cut line for a PGA golf tournament is the score of the 65th lowest scoring player or professional. If you finish at that score or better, you are considered good enough to stay and continue competing. There is also what is called a 54-hole cut. This is when a higher cut line is used after 36 holes, and when more than 78 of the players qualify for the next round of the tournament, a second cut will occur at 54 holes. This cut determines who ends up playing in the final round to be the champion of the tournament.

Why do Golf Tournaments Have Cut Lines?

There are two main reasons golf tournaments have cut lines. The first is field control, and the second is to fulfill a specific format. The first reason, field control, is because golf tournaments start out with hundreds of participants. Due to this, people are usually grouped into groups of three for the first two rounds. After these two rounds, it becomes more obvious who is good enough to make it to the finals or who has a better chance than the ones who don’t. By cutting the field down, the organizers of the tournament can get a better understanding of the players with a chance to win or ones that can finish well. Fulfilling a specific format is when there is an exact set number of cuts that need to be made for a tournament.

Pages Related to What Is The Cut Line In Golf?