What Are The Best Seats At A Golf Tournament? 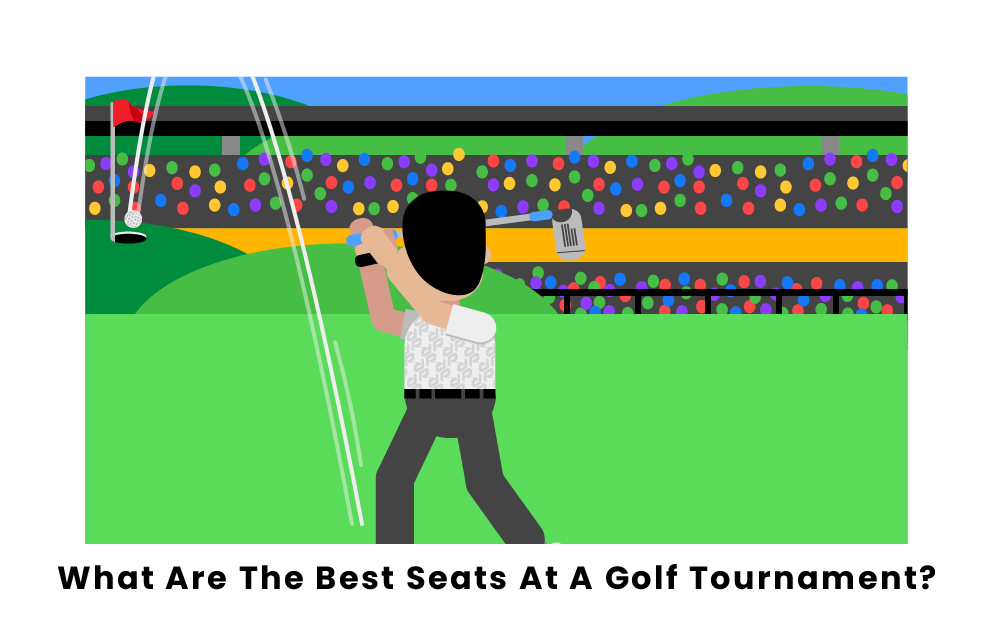 Though many people view golf as one of the least active sports, fans at tournaments are actually required to be on the move more than in any other sport. With 18-hole courses that can be spread out over several miles of land, golf fans rarely stay in the same spot all day, and even each individual hole has its fair share of prime viewing spots. The biggest golf events do set up grandstands for seated viewing, but for the most part, patrons are left to roam the grounds. Keep reading to learn about how seating works at a golf tournament and which seats are the best.

Where do Golf Fans Spend Most of Their Time?

Unlike in other sports where fans have assigned seating, people at golf tournaments are free to watch from whatever part of the course they want. This allows fans to either pick a specific hole they want to see, or a specific player they want to follow. Fans can also simply follow the action and wander around as long as they do not step on the fairways or greens, or cross in front of players who are hitting.

Oftentimes, the most popular players will draw huge crowds that track them throughout the day. Tiger Woods, golf’s most famous player, usually hits his shots with hundreds of people watching from just a few feet away. These crowds will move together and keep pace with a certain player or group of players so that they can see each shot from their favorite pro and keep track of how they’re performing.

Though most tournaments see fans walking around the course, some of golf’s biggest events feature temporarily-constructed seating. At some courses, grandstands are erected for the weekend and placed at the most popular holes, usually towards the end of the course where players are finishing their rounds. This can create a nerve-wracking environment for golfers, as some grandstands hold thousands of people all sitting around the hole. Courses like TPC Scottsdale in Arizona have huge grandstands where fans go wild watching their favorite players stick it close to the flag pin. Other courses feature less obtrusive seating, but will still offer shade and refreshments to guests, providing a more relaxed atmosphere for viewing.

Many of the courses that the PGA plays at have expensive greens fees, as they are kept in pristine condition and offer a challenge even for the best golfers in the world. In the same way, tickets for these events are often not cheap. The average ticket price for the 2022 PGA Championship was $195, and ticket prices for the 2022 Masters were $375. Though most other tournaments are not quite as expensive, costs can still run around $100. However, once a ticket is purchased, fans are free to go wherever they like on the course.

Fans have the option to purchase either a single day ticket or a weekend pass that allows them access to the course for all four days of a tournament. Though the weekend passes are more expensive, they tend to be a good deal for fans who have the time to attend. For fans wishing to stay seated while they watch, grandstand tickets can be purchased. These are more expensive than general admission tickets but offer perks such as seating, shade, and sometimes food and beverage service.

The Downsides of Watching a Golf Tournament

Though attending a professional golf tournament can be a dream come true for many fans, there are a few potential downsides. The biggest factor is weather. Golf is played entirely outdoors, and so the weather on a given day or weekend can make or break a fan’s experience. Tournaments played during the summer months can see scorching hot temperatures that force fans to watch from covered areas. However, once the covered seating is full, fans are forced to sit in the sun, which can be unpleasant if it is very warm. On the other end of the spectrum, cold or rainy weather can also sour the viewing experience.

Though tournaments will pause for lightning and heavy rain, many still play through a light rainfall. Fans who paid for tickets may still wish to watch the golfers compete, but if they cannot find covered seating then they must brave the elements. The other factor to consider when attending a golf tournament is the amount of fans present. Golf’s biggest events see tens of thousands of fans every day, so it can be hard to find a good spot to watch from. Especially if a fan is following the most popular group or player that day, beating the crowds to the next hole is key if someone wishes to get a good look at the golfers.

Overall, attending a golf tournament is a great opportunity for fans who love the sport and want to see their favorite players up close. Unlike most other professional sports, golf has very limited seating, so most fans can roam the ground freely. This usually means that the best place to watch from is either the front of the grandstands or close to the ropes on the walking grounds. Fans can move around to watch their favorite players or stay put at a certain hole they enjoy, making seating at golf tournaments one of the most flexible experiences in sports. If the weather is nice and the golf is competitive, it can be a great time for people of all ages.

Pages Related to What Are The Best Seats At A Golf Tournament?