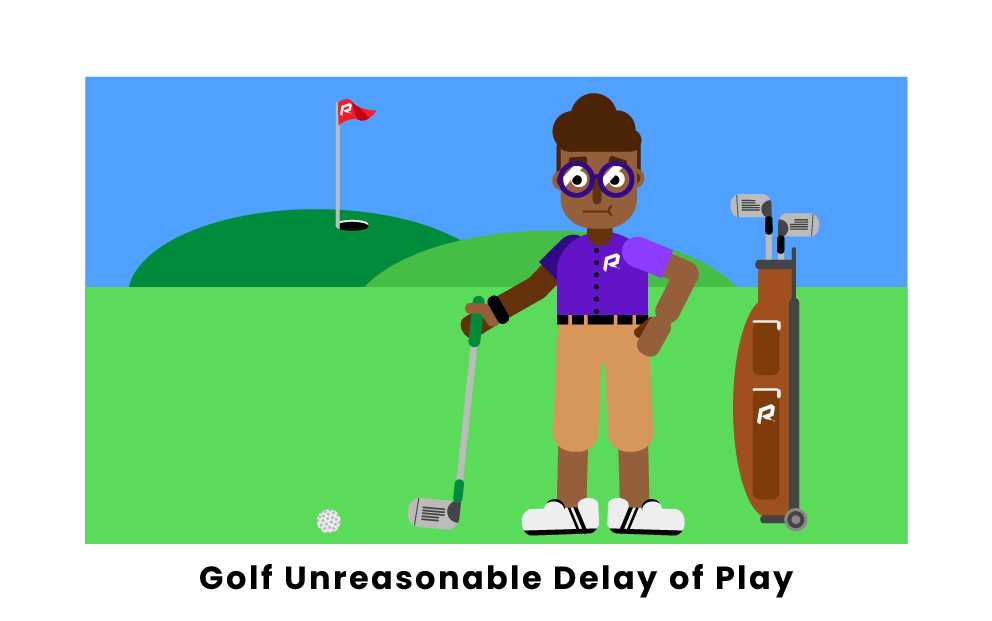 This penalty refers to when a golfer unreasonably slows the pace of play when either playing a hole or between two holes. Golfers are expected to play at a prompt pace during both match and stroke play. Golfers should prepare for their shots and move to their next one in a reasonable amount of time. In general, golfers should take a maximum of 40 seconds to hit their shot after they have approached the ball. In addition, golfers must move to the next tee box in a reasonable amount of time. When golfers fail to comply with these prompt pace guidelines, they may receive an unreasonable delay of play penalty.

Under this penalty, a golfer may or may not receive a warning before receiving an actual punishment depending on the league of play. If a golfer continues to commit this penalty multiple times during a round, the consequences will become more severe. A second violation will often lead to a golfer losing a hole in match play or two strokes in stroke play. The third and fourth violations likely lead to disqualification from a match. This penalty does not apply when unforeseen delays make it impossible for a golfer to conduct their round in a normal fashion. Such circumstances include when a golfer questions a rules official or when a spectator runs out onto the course.

Not many golfers receive this penalty each year. During the 2020 American Junior Golf Association season, only 12 unreasonable delay of play penalties were issued out of 102 total events.

According to the United States Golf Association, golfers will receive one penalty stroke for their first breach of this rule. If a golfer commits another unreasonable delay of play, then they will receive a general penalty. A general penalty is two penalty strokes in stroke play or the loss of a hole in match play. If a golfer commits the same penalty for a third time, they will be disqualified from the round. The Professional Golfers’ Association follows the same rules put in place by the United States Golf Association. For the American Junior Golf Association, pace of play checkpoints are used to help identify when golfers have recorded a bad time. When a golfer receives a bad time during a round of play, they will be given a warning. They will be given a one-stroke penalty once they receive a second bad time. After three bad times, a golfer will be given a two-stroke penalty. Finally, a golfer will be disqualified if they received four bad times at this level.

What is an unreasonable delay of play penalty in golf?

The unreasonable delay of play penalty in golf exists to help deter golfers from taking too much time out on the golf course. Golfers can receive this penalty for any unreasonable delay when hitting a shot, walking between shots, or walking to the next hole. There is an expectation to play golf at a prompt pace, and this penalty helps address players who are not able to do so.

What are the consequences of unreasonable delay of play in golf?

How much time is allowed for a golf shot?