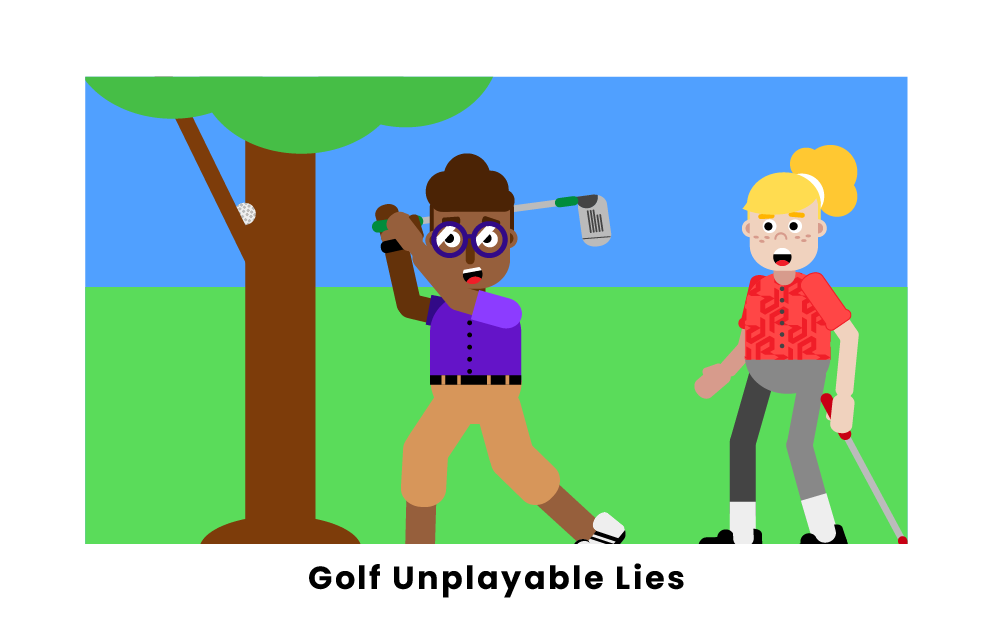 What is an Unplayable Lie in Golf?

In golf, the term “unplayable lie” refers to any situation in which a player’s ball remains in play, as in, somewhere on the hole in question without having been removed from play by a hazard, but is also somehow unable to be played. Because golf courses are integrated into natural landscapes, there are many inherent obstacles on each hole of a course, and these obstacles often account for the unplayable lies that may occur during a game of golf. Unplayable lies can occur with artificial obstacles as well; however, in this case, the golfer will get free relief without incurring a stroke penalty.

How to Get Out of an Unplayable Lie

When a golfer encounters an unplayable lie, their first decision after declaring it unplayable is often how they will escape the situation. Fortunately, USGA Rule 19 offers a set of standards for when a ball that is declared unplayable can be moved and to where.

The second option is to take “back-on-the-line relief.” This involves moving the ball backward in a straight line from the place of the unplayable lie, taking as much distance as required and then placing the ball one club length parallel to that line in either direction. In back-on-the-line relief, the moved ball may be placed on any area of the course, so long as it is located on the reference line.

The final option is to take lateral relief, which consists of moving the unplayable ball two club-lengths away from the unplayable spot in either lateral direction, so long as this does not move the ball closer to the hole.

All three above options are available to golfers whose unplayable balls are trapped in a bunker, though there is the addition of a fourth option, which is back-on-the-line relief that takes the player completely out of the bunker.

What are the Penalties for Escaping an Unplayable Lie?

The final important aspect of escaping unplayable lies in golf is the penalty that comes from declaring a ball unplayable and moving it to a playable spot. Rule 19 of the USGA Rules states that for each of the three standard relief options described above, a player who moves their ball out of an unplayable lie will incur a penalty of one stroke. However, in the case of a player who uses back-on-the-line relief to remove their ball completely from a bunker, a penalty of two strokes is received. These penalties exist to ensure that players only declare a ball unplayable when they are absolutely certain that they cannot make a shot and are thus willing to sacrifice a stroke in order to continue playing.

Unplayable lies are a natural part of golf, and every aspiring golfer needs to be aware of them and how to escape them. By being fully aware of the rules regarding unplayable lies, one can accurately judge when it is best to move a golf ball that has been hit to a bad spot on the course.