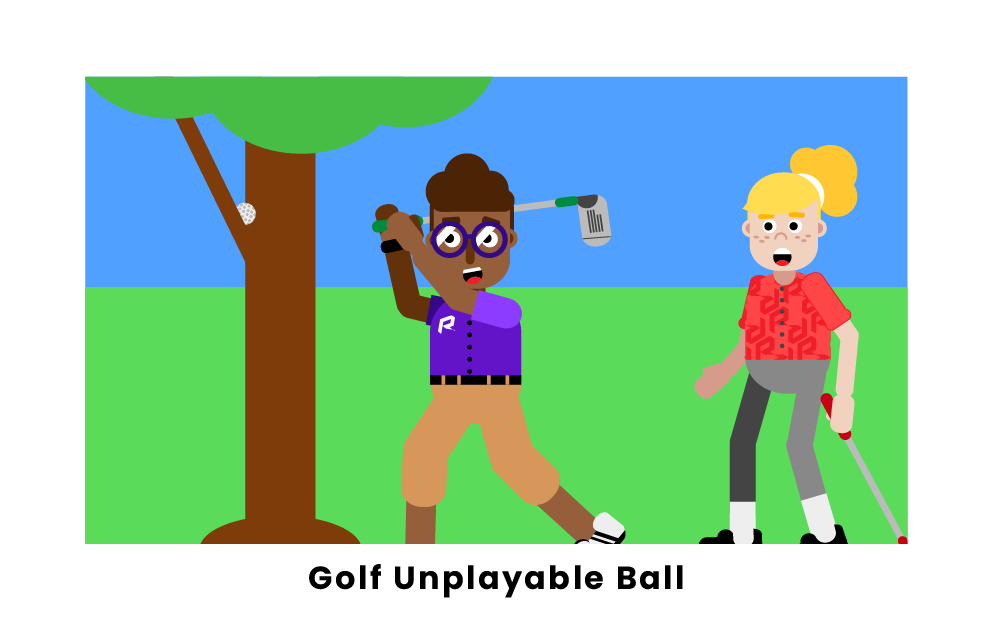 In golf, there is always the possibility of a player hitting their ball into an extremely difficult spot, one which they believe they cannot remove it from by normal means. In such cases, a player is permitted to declare that they believe their ball is unplayable, earning the right to move it to a more open and navigable area. However, there is a consequence to exercising this right, and it often impacts the player’s game negatively.

Golf is a game notable for the difficulty of its courses. Golf balls often fly in unexpected directions, and natural forces such as wind and other obstacles can greatly impede players looking for an easy shot to the fairway or green. Sometimes, a golf ball may land in an extremely difficult spot, one that a player finds impossible to navigate out of. For example, a ball may land in or behind thick trees that block a straight shot onto the course. A ball may also land deep within a sand trap or bunker, making it difficult to chip out onto the course. In these cases, according to Rule 19 of the United States Golf Association (USGA), the player has the right to declare their ball “unplayable,” announcing to their fellow players that they believe it to be impossible for them to hit the ball back onto the course without moving it to a new location.

When a player declares a ball unplayable, there are certain rules they must follow in order to move it to a new location. If the unplayable ball is in the general area of the course, a player has three relief options to set up a clear shot. They may take what is known as “stroke-and-distance relief,” moving the original ball or a new ball to a relief area, which must be one club-length in any direction from the point where the last stroke was made, though not in any direction closer to the hole. A second option is to take “back-on-the-line relief” by dropping the original ball or a new ball one club length in either lateral direction from any point that is on the straight reference line back from where the unplayable ball landed. Finally, a player may take the option of “lateral relief” by moving the unplayable ball two club-lengths in any lateral direction, right or left, from the exact point where the unplayable ball landed. Each of these options comes with an unplayable ball penalty of one stroke.

For a ball trapped in a bunker, a player has four options. The first three are similar to those in the general course category (stroke-and-distance relief, back-on-the-line relief, and lateral relief), and they follow the same general rules. The fourth option for an unplayable ball in the bunker is to take back-on-the-line relief leading outside the bunker, though this comes with a stricter penalty than other forms of unplayable ball relief.

For scenarios where the ball is deemed unplayable by the player who hit it, the cost for moving the ball to a relief area is incurring a penalty of one stroke. This means that the player is moved one stroke closer to or past par stroke, which negatively impacts their game, as golf is won by whomever has the fewest overall strokes. However, if a player chooses to use back-on-the-line relief to remove their ball completely from a sand trap, they will incur a penalty of two strokes rather than the traditional one-stroke penalty for all other instances of moving an unplayable ball.

What is an unplayable ball in golf?

In golf, an unplayable ball is any ball that a player believes they cannot effectively play due to some obstacle or impediment. For example, the ball may be trapped behind or within thick trees that the player cannot navigate or stuck in a sand trap that is impossible to hit out of. In these cases, the player may elect to use one of three options for unplayable ball relief: stroke-and-distance, back-on-the-line, or lateral relief. There is also the option of using back-on-the-line relief to remove a ball completely from a sand trap. These options all incur a penalty.

What are the consequences of declaring a ball unplayable in golf?

If a golf ball is deemed unplayable, moving it to a relief area results in a penalty of one stroke, moving the penalized player one stroke closer to or past par. This one-stroke penalty is required for every form of unplayable ball relief except when a player chooses to use back-on-the-line relief to remove their ball completely from a sand trap. In this case, the player will incur a penalty of two strokes.

What is a provisional ball in golf?