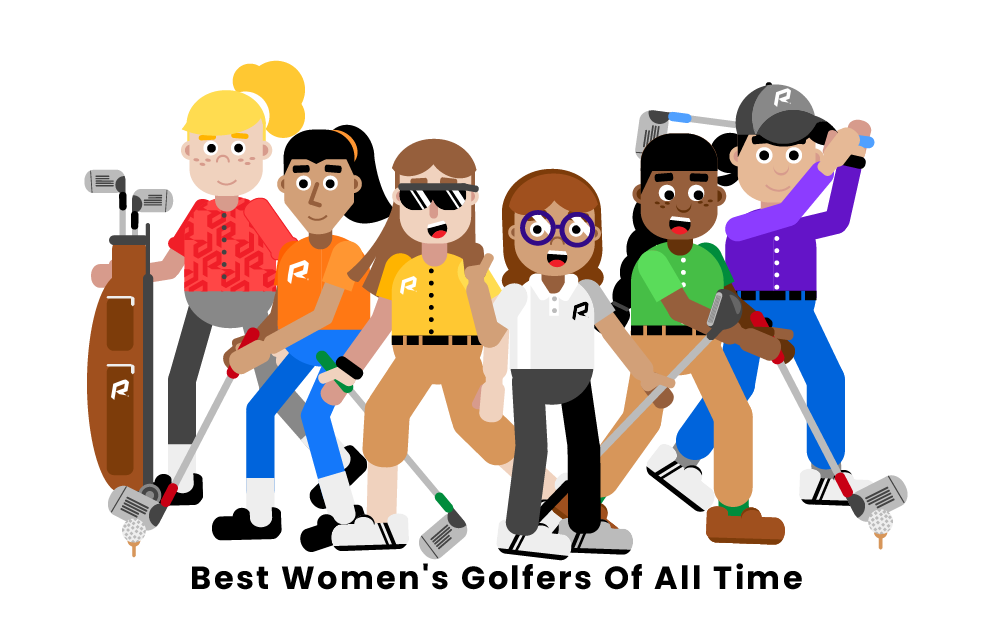 Golf is a sport that requires extreme skill, mental toughness, and a deceiving amount of athleticism. This makes it one of the most difficult sports to master, and it is nearly impossible to dominate consistently on the course. Below are nine of the best female golfers of all time, along with the achievements, records, and stories that make them so special.

Who are the best women’s golfers of all time?

Kathy Whitworth began playing golf at the age of 15 and was a professional on the LPGA Tour by the time she was 20 in 1959. Whitworth is the winningest player in the history of golf, with more tournament victories than any other male or female has ever recorded, with a grand total of 88. Due to her immense success, Whitworth has been inducted both into the LPGA Tour Hall of Fame as well as the World Golf Hall of Fame. Her impact on the game is far greater than just her scores, as she and Mickey Wright became the first-ever women’s duo to compete in the PGA-sanctioned Legends of Golf event. In 2006, she was named the PGA First Lady of Golf, and she continues to serve on the LPGA Commissioner’s Advisory Council.

Annika Sorenstam began golfing at the age of 12, and it only took her a few short years to start experiencing great success. She dominated during her amateur career, leading the Swedish National Team from 1987 to 1992, and she collected seven tournament victories during her time at the University of Arizona. Sorenstam finally joined the LPGA Tour in 1995, the same year she recorded her first U.S. Women’s Open victory and was named Sweden’s Athlete of the Year. She holds the record for most LPGA tournament victories in a single season with 11, tied with Mickey Wright. She also broke Kathy Whitworth’s record for the most LPGA Player of the Year victories by winning the award eight different times over the course of her career.

Similar to Sorenstam, Mickey Wright began playing golf at the age of 12 and found early success, as she would win the 1952 U.S. Girls’ Junior Championship and the 1954 World Amateur Championship. She joined the LPGA Tour in 1955 and dominated all throughout the end of the 60s, a decade that saw her win 68 of her 82 titles. Wright was a member of the inaugural class for the LPGA Hall of Fame in 1967 and was inducted into the World Golf Hall of Fame in 1976. Her 82 titles give her the second-most career victories ever. Additionally, Wright is the only golfer in LPGA history ever to hold all four major titles at the same time, a special show of dominance that may not be replicated again.

Patty Berg collected 28 amateur championship titles over the course of seven years, until finally joining the tour in 1940. Berg was one of the LPGA’s 13 founders. Her career totaled 60 victories with 15 major championship titles. Remarkably, she also became the first woman in history to sink a hole-in-one at a USGA competition at the 1959 U.S. Women’s Open. Berg was known especially for her love of teaching the sport of golf, as she is best known for the Wilson clinics she would put on even until her last days. As such, Berg was inducted into the LPGA, LPGA Teaching & Club Professionals, and World Golf Hall of Fames.

Louise Suggs was another one of the original LPGA founders. Suggs had an overwhelmingly dominant amateur career, with 14 tournament wins that included victories at the 1946 and 1947 Western Amateur Championship and the Western Open. After helping found the LPGA, Suggs would finish her career with 58 LPGA Tour victories and 11 major victories. She also became the first woman to participate in the U.S. Women’s Open, the LPGA Championship, the Western Open, and the Titleholders Championship. Suggs received the same treatment as Berg, being inducted in the LPGA, LPGA Teaching & Club Professionals, and World Golf Hall of Fame.

Mildred Ella Didriksen, better known as Babe Zaharias, was a dominant Olympian and was frequently hailed as the “greatest female athlete in history.” Zaharias’ talents included a long list: she was a specialist for hurdles, javelin, and high jump in track and field, an All-American basketball player, and excelled in baseball, tennis, and diving, to cut it short. Zaharias finally turned her attention and talent toward golf in 1934. Zaharias brought a certain level of “swagger” to the game, ending her golf career with 41 professional wins and 36 titles on the LPGA tour. She holds the record for being the first female golfer to reach 10, 20, and 30 wins fastest in the LPGA. Zaharias was one of the LPGA’s original founders and was inducted into both the LPGA and World Golf Hall of Fame.

Betsy Rawls (Elizabeth Earle Rawls) got a later start to the sport than most at the age of 17. She enjoyed a very successful amateur career; just a few years after taking up golf, she won the 1949 Texas Amateur and the 1950 Texas Amateur the year after that. To top off her early career, she came in second in the 1950 U.S. Women’s Open while she was still an amateur. In 1960, Rawls became the first LPGA player to win the U.S. Women’s Open four times. Her career totaled 55 LPGA victories along with eight major titles, earning her a spot in the LPGA and World Golf Hall of Fame.

After turning professional late in 1994, Karrie Webb won Rookie of the Year on the Women Professional Golfers' European Tour while also qualifying for the LPGA Tour with a broken wrist in 1995. In just her second tournament, Webb would win at the HEALTHSOUTH Inaugural in a 4-hole playoff. In 1996, she would make over $1 million, making her the first player in LPGA history to make more than $1 million in single-season earnings, but also making her the first rookie in LPGA or PGA history to earn more than $1 million in single-season earnings. Her dominance would continue with Vare Trophy wins in 1997, 1999, and 2000. She would also win back-to-back Rolex Player of the Year awards in 1999 and 2000. Although she was inducted into the World Golf Hall of Fame back in 2005, she was still winning LPGA events as recently as 2014.

Nancy Lopez experienced success against professionals while she was still an amateur, finishing in a tie for second place in the U.S. Women’s Open in 1975. This translated to immediate success once she declared herself a professional, as she would go on to win nine total tournaments, with a record five of them coming consecutively. In 1978, she became the only golfer in history to win Rookie of the Year, Player of the Year, and the Vare Trophy all in the same season. She followed that up by winning Player of the Year and the Vare Trophy again the very next season. She would continue to be a presence on tour up until 1998, her last full season on tour, with her 48th and final career win coming in 1997 at the Chick-Fil-A Charity Championship.

Who is the best women’s golfer of all time?

The title of best women’s golfer of all time is a highly debated topic. However, Kathy Whitworth’s record of the most career victories than any other golfer in history, regardless of gender, supports the argument that she is the best of all time. If performance on the big stage is more important, then Patty Berg’s 15 career major victories also give her a case. Meanwhile, no other golfers have experienced the strings of dominance that Nancy Lopez and Annika Sorenstam have by winning five consecutive tournaments.

What women’s golfer has the most major golf championship wins?

Patty Berg has the most major golf championship wins with a grand total of 15, two more than any other female golfer in history. Berg would win seven Titleholders Championships, seven Women’s Western Opens, and the Women’s U.S. Open once. Berg launched her career at the Titleholders Championships as she would win three consecutive years beginning in 1937. Unfortunately, due to a lot of her success coming so early, Berg won 8 of her 15 titles before she helped co-found the LPGA.

What women’s golfer has the most LPGA wins?

Pages Related to Top 9 Best Women's Golfers of All Time