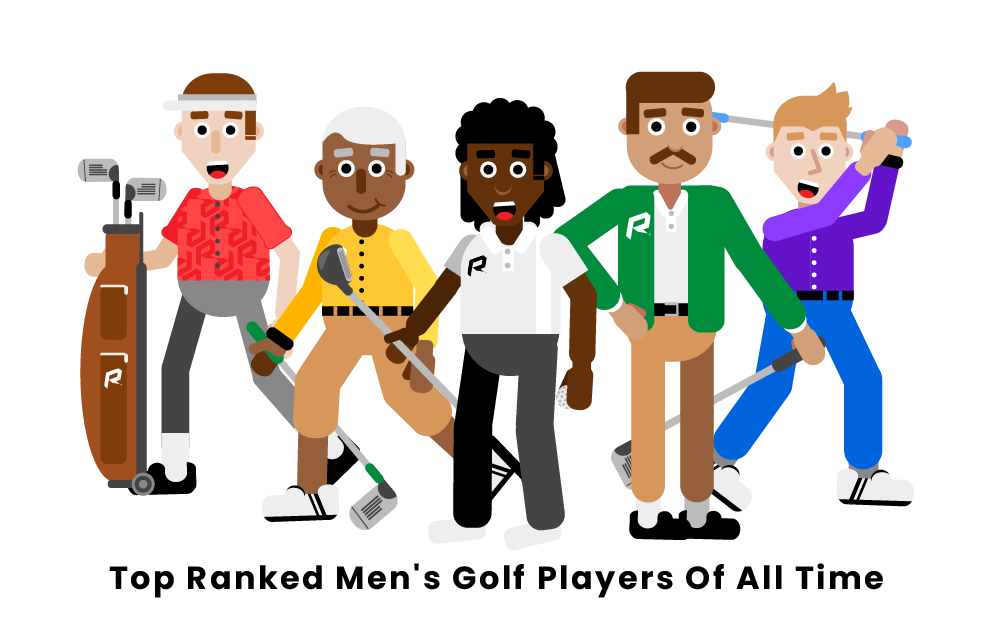 Golf is one of the most recognized and respected games in the sports world, and its athletes are no different. There has been no shortage of greats in the sport, and this list will aim to highlight some of the best golfers of all time.

Who are the best men’s golfers of all time?

Tiger Woods’ dominance started at an early age. At only 15, he became the youngest US Junior Amateur champion, and at 19, he played in the 1995 Masters. He is tied for the most PGA Tour victories of all time with 82, won the PGA Tour Player of the Year award ten times, again the most of any golfer, and owns the lowest scoring average in the history of the PGA Tour. Tiger Woods has also won the Masters tournament an impressive five times, undoubtedly a factor in his eventual induction into the Pro Golf Hall of Fame, which happened in 2022.

Jack Nicklaus is one of the most iconic legends in golf history; playing from 1962 to 2003, his longstanding success firmly places him on this list. His 18 Major wins over his career are the most of any golfer; he had 73 official tour victories and 118 globally, not to mention he made 21 hole-in-ones during his time in the pros. Jack also won the PGA Champions tour twice during his tenure, once in 1991 and again in 1995. His impressive career was recognized in 1974 when Nicklaus was inducted into the Pro Golf Hall of Fame, cementing his place among the greats.

Ben Hogan is one of the most impressive figures in the golf world and also embodies the word perseverance. From 1940 to 1942, Hogan only managed 15 tournament wins, and yet somehow, from 1946 to 1948, he reeled off an astounding 31 tournament wins. One of the most iconic moments in his career came after a near-deadly car crash in 1949, which left him permanently affected. After this terrible accident, he won six major championships in nine starts from 1950 to 1953. Hogans' career was inspiring, and he was rightfully inducted into the Golf Hall of Fame in 1974.

Sam Snead is one of the most respected and successful golfers of all time; his 82 total PGA Tour wins are tied all-time with fellow legend Tiger Woods for most career PGA Tour wins. Snead managed to win all of the Major golf tournaments outside of the U.S. Open, but he was still an impressive two-time second-place finisher. Snead also managed to win an equally remarkable three Masters tournaments in seven years (1949, 1952, 1954), one of the many achievements he gained over his massively successful career, which eventually accumulated into a PGA Hall of Fame induction in 1953.

Arnold Palmer is one of the most recognizable names in golf history. Making his PGA debut in 1949, his skill on the course, combined with his charisma, made him one of golf's earliest stars. His career was studded with numerous achievements and impressive victories, but one of his most remarkable accomplishments is undoubtedly his fourth Masters victory which he achieved in 1964. This victory was his fourth one at the Masters and made him the first golfer ever to achieve such a feat. His hard work and dedication to the game were rewarded with him being a part of the first World Golf Hall of Fame class in 1974.

Gary Player was another of golf's first wave of real superstars. Starting his career after entering the PGA Tour in 1955, it was not long until he started making a name for himself on the big stage. Player was able to win nine separate Major events during his time playing at the professional level. He managed to achieve 24 career PGA Tour wins and the mentioned above three Masters Victories. His career highlight was completing the third-ever career Grand Slam by winning all four Major Tournaments. Player was inducted into the World Golf Hall of Fame in 1974.

Walter Hagan may be the oldest name on our list, but his achievements and skill are impressive nonetheless. Hagan started his career in a unique fashion. He managed to win his first-ever tournament, the 1914 U.S. Open, and simultaneously set the Midlothian course record during his victory. Hagen then went on to win the British Open four times; his first in 1922, his second in 1924, and then he managed to win back-to-back victories in the 1928 and 1929 seasons. He also accumulated two U.S. Open titles (1914 and 1919), six PGA Championships, and played in more than 2,500 exhibition matches.

Tom Watson is a decorated golfer and one of the greatest ever to play professionally. Watson entered the PGA officially in 1971 and managed to win his first PGA event at the 1974 Western Open. Outside of his two Masters victories and 14 PGA Tour wins, his career highlight came with his 1983 British Open victory, his fifth win at the tournament. Watson's undeniable talent was not lost on his peers as he was named PGA Player of the Year (1977–80, 1982, & 1984) on six separate occasions. Watson was inducted into the World Golf Hall of Fame as a part of the 1988 class.

While Phil Mickelson may be one of the few active playing members of this list, what he has achieved in his career is still undeniably remarkable and firmly places him on this list. Mickelson has accumulated 48 PGA Tour wins under his belt and has also managed to become only the fourth amateur to ever win a PGA tournament after his performance at the 1990 U.S. Amateur Championship tournament. He has also won three Masters and Ryder Cups each and, at only the age of 41, was inducted into the World Golf Hall of Fame as part of the 2012 class.

Who is the best men’s golfer of all time?

Tiger Woods is unquestionably the best golfer and has the stats to prove it. His dominance started at an early age. At 15, he became the youngest US Junior Amateur champion, and at 19, he played in the 1995 Masters. His winning nature continued as his career progressed. He accumulated 82 PGA Tour Victories, tied for the most of all time, an additional 12 international tournament wins, and was a two-time FedEx Cup champion winning in 2007 and 2009.

What men’s golfer has the most major golf championship wins?

The most career Major wins belong to one of the game's legends, Jack Nicklaus. His 18 Major wins over his career are the most of any golfer and are only trailed by another golf legend, Tiger Woods, who only has 15, showing just how impressive Nicklaus' record is. Jack got his first Major win in 1962 at the U.S Open and his last at the 1986 Masters Tournament, showing that his dominance lasted from start to finish in his career.

What men’s golfer has the most PGA wins?

Tiger Woods and Sam Snead are tied for the most PGA wins of all time at 82. Their 82 total wins are the most by far, with the next closest golfer still trailing by nine wins and that golfer being the legend, Jack Nicklaus, who has only 73  PGA Tournament wins to his name.

Pages Related to Top 9 Best Men's Golfers of All Time