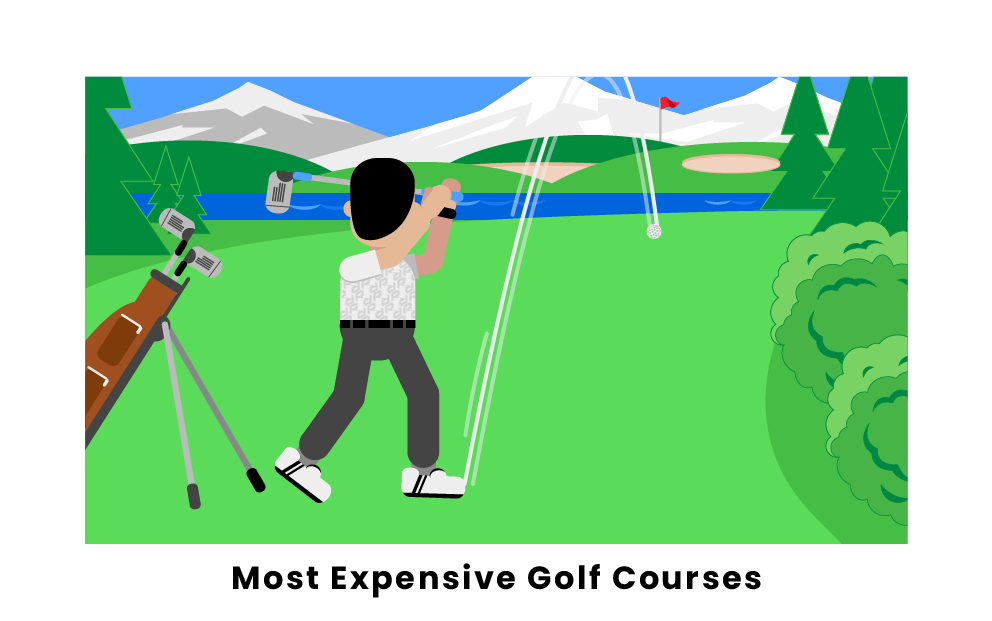 Golf courses are often known for their pristine maintenance and scenic views, and each course has its own features that make them unique. Yet a common factor among most courses is the sometimes extravagant prices; this list will highlight the top six most expensive golf courses.

What are the top 6 Most Expensive Golf Courses?

The Shadow Creek Golf Course in Las Vegas, Nevada, is the most expensive course that a golfer can pay to play at. The 18-hole course is situated next to the gorgeous Nevada mountains and crystal blue water; the $60 million 350-acre course is well worth the cost of admission. The additional requirements make this course so expensive; for example, the person wanting to play must already be staying at an MGM hotel and take an MGM-owned limousine to and from the course. This does not factor into the cost of a single round, which can range between $750-$1,000 depending on whether it is peak season.

Built in 1980, the 42-year-old TPC Sawgrass in Ponte Vedra Beach, Florida, is home to one of the most iconic courses in golf history; the course has been home to The Players Championship since 1982 and contains one of the most challenging holes ever constructed. The course can cost up to $720-$840 during peak times to play a single round; considering that the course is surrounded by surreal scenery and gorgeous waterfront views, the costs are well worth it. Its notorious 17th hole is a par three that had 66 balls hit in the water during the 2021 Players Championship match.

The Wynn Golf Course in Paradise, Nevada, was built in 2005 and was designed by Tom Fazio and Steve Wynn, the same two behind the design of Shadow Creek. The course is situated next to the Las Vegas Strip and is the only golf course that can claim that, making for quite the unique vista. As a part of the Wynn Resort, the 7th-largest hotel globally, the maintenance and service on the course are impeccable, including battery-powered golf carts to forecaddies and a Rolls Royce pickup for off-site guests; The Wynn is more than justified in its $650 price tag.

The Pebble Beach Golf Links, situated in sunny and beautiful Pebble Beach, California, is home to one of the world's most expensive and breathtaking courses. It is iconic in golf history for being the annual venue for the AT&T Pebble Beach Pro-Am and having hosted more US Opens than any other course in the last 50 years. The course has also been known for its longstanding immense price tag required to play here, costing you $600 and another $50 for cart fees and a potential $1,000 fee for staying at one of the three hotels located on the course.

One of the oldest golf courses ever built, Old White at Greenbrier Resort Golf Course is home to one of the most recognizable and expensive courses ever seen. Formerly known for its place as the home for the FedEx Cup Event on the PGA Tour from 2010 to 2019 as the Greenbrier Classic, the course is still held in high esteem by many golfers and is viewed as a desirable location for fans. This is evident by the $575 it costs for a round during peak season, from May to October.

The Trump National Golf Course, located in Doral, Miami, and built by Alfred Kaskel in 1962, is home to 72 holes, including the infamously difficult “Blue Monster” course. The course has been iconic for many golf fans, as from 2007 to 2016, it was the host of the WGC-Cadillac Championship on the PGA Tour. Famous golfers such as Tiger Woods (2007, 2013), Phil Mickelson (2009), and Ernie Els (2010) have all notably won events at this course. While the prices for the course peaked when namesake Donald Trump was in office, the course now costs $495 for a round.