Top 6 Golfers With The Most Majors Wins 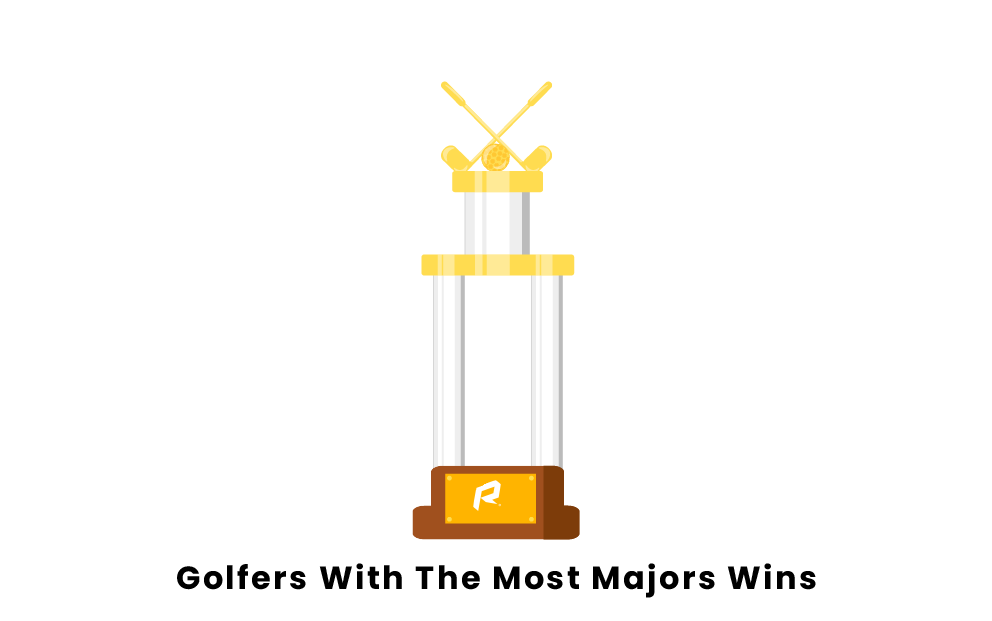 The Masters, PGA Championship, U.S. Open, and British Open are the four major championships and four of the toughest events in sports to win. Golfers dream of being able to win one of these tournaments just once. However, some of the greatest golfers have done it several times. Here are the six golfers with the most major wins and some more information about them!

Who are the 6 Golfers with the Most Majors?

Jack Nicklaus is regarded by many as the greatest golfer of all time. He helped turn golf into the popular spectator sport that it is today. Nicklaus was a force in golf from the start of his career in 1962 until the end as a senior tour golfer in 2005. He became the oldest player to ever win the Masters in 1986. Nicklaus is also the only person in PGA history to win the Senior PGA Tour event four times. Jack Nicklaus was inducted into the World Golf Hall of Fame in 1974 and won the PGA Player of the Year Award five times. Off the course, Nicklaus has turned to golf course designing. His first design was Harbour Town Golf Links.

Eldrick “Tiger” Woods is also viewed by many as the greatest golfer of all time. Woods took up golf at a very young age, learning from his father. At the age of 15, Woods became the youngest golfer to win the U.S. Junior Amateur Championship. His 82 career PGA tour wins are tied for the most by any golfer. In 2019, Woods won the Masters, which was his first major championship in 11 years. Tiger Woods is famous for his Sunday red because he always wears a red golf shirt on Sundays. Woods is also the golfer with the highest career earnings of all time.

Walter Hagen, the winner of 11 major championships, is known for being one of the greatest golf personalities the world has ever seen. His self-confidence and lavish lifestyle helped establish the PGA and raised the social standing of golf as a sport. Walter Hagen won the PGA Championship five times, more times than any other golfer. Hagen also represented the United States as a Ryder Cup captain six different times. He was known for his colorful outfits and was even the first athlete to be named on the Best Dressed Americans list. In 1974, Hagen was inducted into the World Golf Hall of Fame.

Ben Hogan became a professional golfer in 1929 and went on to win nine major championships in his career. He won the PGA Championship in 1946 and 1948 and the U.S. Open in 1948. In 1949, Hogan’s car was hit head-on by a bus, and he was never expected to walk again. Nonetheless, he managed to reteach himself how to walk and even swing a golf club again. Hogan won the U.S. Open three more times, the Masters twice, and the British Open once after the injury. Ben Hogan also won the Vardon Trophy three times, an award given to the golfer with the lowest average score in a year.

In 1955, Gary Player began his career with the PGA. Player, from South Africa, was a huge part of the popularization of golf in the 1960s and continues to be a figure in golf to this day. He has nine major wins and even won all four majors in one year, becoming just the third golfer and first non-American ever to complete the Grand Slam. In the 1980s, Player began designing golf courses and has become a well-known course architect who has designed over 320 courses around the world. In 1985, he began his career on the Senior Tour and eventually retired in 2009. Despite his career being over, Gary Player is still very present in the golf world and plays to this day, even in his late eighties.

Tom Watson comes in at sixth all-time with a total of eight major wins. Five of his eight major championships came at the British Open, and Watson had a total of 71 professional career wins. He was always a fan favorite because of his fast pace of play and remarkable sportsmanship. Watson was also a part of three Ryder Cup victories and was inducted into the World Golf Hall of Fame in 1988. He will be remembered for his amazing putting and chipping abilities, as well as his dominance in major tournaments.

Pages Related to Top 6 Golfers With The Most Majors Wins