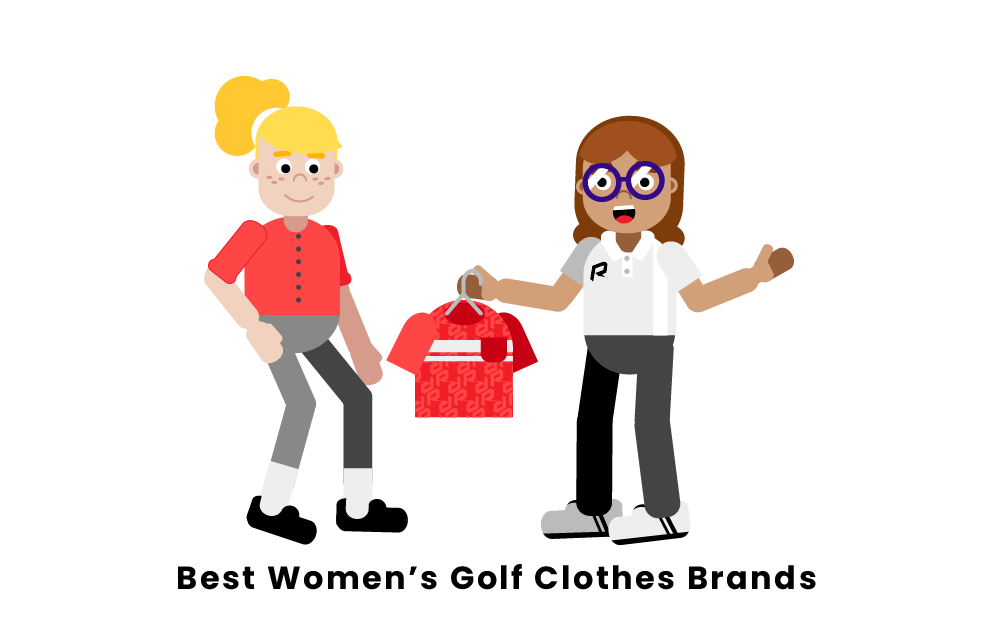 Golf is a popular competitive and leisure activity around the world and is widely praised for its accessibility for both male and female golfers. As golf has grown in popularity amongst the general public, some sportswear brands have risen to the top in regard to their production of women’s golf clothing. Read on to learn about the top six best women’s golf clothing brands.

What are the most popular women’s golf clothes brands?

A derivation of the famous Hagen Brand, Lady Hagen Golf Clothes are crafted and distributed by Dick’s Sporting Goods. The brand is named after the Walter Hagen Golf Company, a business owned and started by Walter Hagen, one of the most renowned golfers in American history. Hagen, also known as “the Haig,” was a major figure in golfing history, winning 11 major championships and becoming one of the inaugural inductees into the World Golf Hall of Fame in 1974, a few years after his death in 1969. During his life, Hagen also started a golf company, producing golf clubs in Longwood, Florida, beginning in 1925 and then moving to Detroit, Michigan, in 1927. The company was successful for many years, but the Second World War stifled its production, leading to its being purchased by Dick’s Sporting Goods. Today, Dick’s manufactures and sells both men’s and women’s products under Hagen’s name, offering women’s golf clothing under the Lady Hagen brand. The company sells various items, from golf skorts and skirts to jackets, pullovers, polos, and golf necessities such as clubs.

Puma’s brand history is intricately tied to the history of another famous company on this list, Adidas, as the two companies were founded separately by a pair of brothers, Rudolf “Rudi” Dassler and Adolf “Adi” Dassler. Their shoes became immensely popular, but in 1948, the brothers had a falling-out and separated, each moving on to start their own businesses, with Adi Dassler founding Adidas and Rudi Dassler developing Puma. Both brothers achieved success with their separate companies, with Puma becoming a great innovator in sports like track and field, soccer, and tennis. Puma first branched out into golf clothing and equipment in 2006, but in 2010, the company acquired a new brand, COBRA Golf, which sells both men’s and women’s golf clothes. Under the COBRA Brand, Puma sells various women’s golf clothes, such as sleeveless golf polos, golf dresses, golf shorts, golf shirts, and golf jackets. Puma makes use of various technologies in its women’s clothing, including dryCELL fabric designed to be stretchy and flexible. The brand offers women’s clothes in a variety of styles, with bright colors that brighten up the course. In addition to selling female golf clothes, Puma sponsors female golfers through its COBRA brand, including golfers Lexi Thompson and Blair O’Neal.

Callaway is one of the most well-known golf companies in the world and, as such, is a natural addition to this list. Founded in 1982 by Ely Callaway, the company is known for producing high-quality golf clubs and golf balls marked with their signature Old English style script and chevron symbol. The company operates five major golf brands: Callaway, Odyssey, Toulon Design, OGIO, and TravisMathew, and sells various types of golf equipment to both men and women. Like most other companies, they sponsor many male and female golfers, including famous male golfers like Phil Mickelson and Sergio Garcia and women such as Annika Sorenstam and Michelle Wie. Callaway offers a number of different women’s golfing products, including pullovers, pants, skorts, polos, and jackets. Callaway's various technologies include Opti Dri™ moisture-removing fabric, Swing Tech™ Seam Technology, and TrueSculpt™ Power Mesh fabric for optimal fitting.

Founded in 1996, Under Armour is the creation of Kevin Plank, a former captain for the University of Maryland football team, who created a new fabric that would resist sweating and other difficulties beneath heavy padding. This led to the creation of Under Armour, a breathable fabric that quickly became a best-seller. In time, Under Armour grew to become a huge company that sold various products across multiple sports and earned a number of sponsorships from high-profile athletes. Today, Under Armour sells a variety of golfing equipment, including a line of golf clothes created in partnership with NBA legend Steph Curry, which began to be released in 2019. The brand sells various women’s golfing items which make use of its patented, four-way stretch fabrics, which are known for being breathable and soft to the touch. Among these notable products is the Under Armour Printed Women’s Golf Skort, a short skirt that allows female golfers to move and swing comfortably in various directions. Under Armour also sells women’s golf hoodies, polos, pants, shorts, and zip vests for colder courses.

Founded by Adi Dassler, the brother of Puma founder Rudi Dassler, Adidas is one of the most well-known sports footwear companies in the world. After separating from his brother in 1948, Dassler went on to become a top sports shoe manufacturer, advising athletes all over the world, including Olympic athletes. His company’s shoes exploded in popularity in 1954, when they helped the German soccer team win that year’s World Cup against Hungary. In 1997, Adidas gained footing in the golf world by merging with Salomon Group, which owned the popular golf brand TaylorMade. In 2006, Salomon left Adidas, but the brand rights to TaylorMade remained with Adidas until they were sold in 2017. Today, Adidas sells its own branded golf clothing and equipment, including clothing for women, which includes leggings, jackets, sweatshirts, shoes, dresses, and polos. Adidas sponsors many pro golfers in both the PGA and LPGA tours, including female golfers Paula Creamer, Jessica Korda, and Danielle Kang.

Founded in 1964 by Bill Bowerman and Phil Knight, Nike was originally known as Blue Ribbon Sports and launched its first Nike shoe in 1972. The company later renamed itself after the Nike shoe in 1978, and over the following decades, became a household name among athletes. Today, the company retains its dominance in the footwear world, most notably for its numerous sponsorships by pro athletes, among the most famous of which are Michael Jordan, Mia Hamm, and Roger Federer. In the golf world, Nike has secured perhaps the most sterling sponsorship in the form of legendary golfer Tiger Woods, who has long been a representative of the company. Nike also sponsors a number of famous female golfers, including Suzann Pettersen and Michelle Wie. The company sells a variety of men’s and women’s golfing products, most notably shoes and clothing. Among the various women’s products Nike sells are golf jackets, vests, long sleeve tops, skirts, shorts, and polos. Nike’s women’s golf clothes make use of the company’s various patented technologies, including Therma-FIT™ and Dri-FIT™, and many of the Nike women’s golf products (such as their golf skirts, shorts, and polos) are made with sustainable materials.