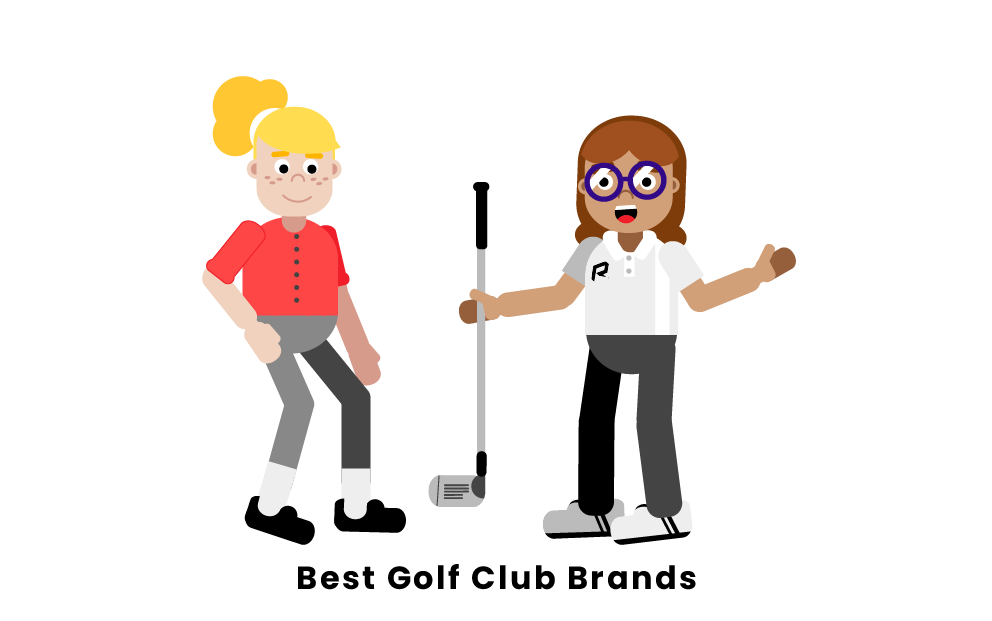 For amateur and professional golfers alike, the most important equipment needed to play the game well is a good set of clubs. Each golfer has their own preferences when it comes to the clubs they use, with some preferring to use a matching set of clubs all made by one brand and others choosing to mix-and-match. No matter what one chooses, it is crucial to have a set of clubs that is both comfortable to use and effective in play. Choosing which clubs work best for your golf game can be difficult, but luckily, there are plenty of brands to choose from!

What are the most popular golf club brands?

Due to their famed golf balls, Titleist is undoubtedly the most recognizable name in the sport of golf, but the company’s long history is not solely confined to making golf balls. Titleist was first founded in the early 1930s as the Acushnet Golf Division and was created by Phil Young and Fred Bommer. Over the following decades, Titleist became the most-played golf ball on professional courses and remains so to this day. The company does not only manufacture golf balls, however, as they also produce clubs. Titleist designs and develops its own clubs in-company, working to create clubs that are faithful to their brand vision of performance and quality. Many of Titleist’s clubs contain patented technology to improve performance, such as SureFit® Hosel Technology, which allows golf clubs made by Titleist to interchange shafts. Titleist offers a wide range of clubs, including drivers, fairway woods and irons, hybrids, wedges, and putters. Titleist sponsors many golfers as “Brand Ambassadors,” including players such as Justin Thomas, Patrick Cantlay, and Webb Simpson.

Aside from Titleist, Callaway is another of the most well-known brand names in golf. Founded in 1982 by Ely Callaway, the company grew from a small, shaft-manufacturing business to a major player on the golf stage in less than a decade. By the 1990s, senior golfers on the PGA tour were beginning to use Callaway clubs. The launch of the company’s famous “Big Bertha” driver in 1991 was an immense success, leading to sales topping $130 million by the following year. By 1995, Callaway was the world’s biggest seller of irons and woods and began to develop golf balls. Over the years, the company has patented various golf club technologies, including the Odyssey White Hot Putter technology, “I-MIX” technology, and many others. Today, Callaway continues to produce clubs from its facilities in Carlsbad, California, Toronto, Canada, and Monterrey, Mexico, with a golf ball producing plant in Chicopee, Massachusetts. The company prides itself on selling the market’s most advanced clubs, many of which are developed with sophisticated AI technology in order to enhance their performance. Some of the unique technologies Callaway has patented include the Jailbreak AI Speed Frame Technology, the Tungsten Speed Cartridge Structure, and the Flash Face. Callaway also sponsors many famous golfers, including Phil Mickelson, Jon Rahm, and Xander Schauffele.

TaylorMade was founded in the spring of 1979 by Gary Adams, starting out with only three employees and one product, a driver made out of stainless steel. This innovation in club technology improved player ability and corrected many inherent flaws of wooden clubs, which led to TaylorMade’s business growing exponentially. Over the years, TaylorMade released a variety of uniquely-developed golf clubs, among them the SuperSteel Irons Series, the 300 and 360 Series, the Burner Iron, the RocketBallz Series, the Speedblade Series, and the SiM Series. These clubs have utilized a variety of technologies, including SuperFast and Face Slot Technologies developed by TaylorMade. Today, TaylorMade has added newer and more advanced technologies to its repertoire, such as Twist Face, Speed Pocket, and Geocustic Technology. TaylorMade sponsors a number of well-known golfers, including golf legend Tiger Woods, Dustin Johnson, Rory McIlroy, Sierra Brooks, Maria Fassi, and Brooke Henderson.

Ping Golf Clubs was first founded in 1959 by Karsten Solheim, an engineer for General Electric who became dissatisfied by the quality of putters being sold on the general market. In his own garage, Solheim created a new putter, which he called the “Ping 1A,” named for the sound it made when striking a golf ball. The putter’s equally-distributed weight created a larger sweet spot in the face, improving accuracy. Over the next decade, Solheim’s putters came into heavy demand, and this led to him developing new clubs, such as the Anser Putter of 1966 and a series of irons in 1969. After a brief struggle into the 1980s due to lawsuits by the U.S. Government and the PGA, which accused Ping of violations in the shape of its clubs, the company staged a comeback in 1995 by signing a full squadron of salaried golf players, a new development in the world of sponsorships. Today, Ping continues to sell golf clubs of all types and sizes, from drivers, to woods, to its trademark putters. As with its competitor companies, Ping’s clubs utilize a variety of patented technologies, including Facewrap™ and Spinsistency™ Technologies. The company sells clubs designed for both men and women, and as with its fellow companies, sponsors many pro athletes, including Cameron Champ, Corey Connors, Tony Finau, and Bubba Watson.

Cobra Golf was founded in 1973 by former Australian amateur golfer and club designer Thomas Crow. In 1975, the company released its first wood, the “Baffler,” which utilized a patented sole-plate design to make it effective from various lies. Over the following years, Cobra released new clubs and innovations, such as the extended-length driver, graphite-shafted woods and irons, and the patented Autoclave System, which allowed graphite shafts to be strengthened through a unique compression-curing process. Cobra continued to rise in prominence through the 1980s and 1990s, introducing dozens of new clubs. In the modern era, Cobra was purchased by popular sports clothing company PUMA in 2010, becoming a subsidiary of the company. Today, Cobra continues to innovate and develop new golf clubs under PUMA’s name and sells a wide variety of clubs, including the newly-released LTDX Series, the AIR-X Family, the King TEC Hybrid Series, and the King Putter Series. These clubs use a wide array of Cobra’s patented technologies, including PWR-COR Technology, H.O.T. Face Designs, and the inclusion of Arccos Smart Sensors, developed by the Arccos Company to track club distance and performance through their smartphone app. Cobra Golf, as with many other companies, sponsors a number of pro golfers, including Rickie Fowler, Bryson DeChambeau, and Lexi Thompson.

Mizuno Golf was founded by Japanese kimono shop worker Rihachi Mizuno in 1933 after a career pursuing his most-beloved sport of baseball. After opening a store in 1906 to sell baseball equipment, Mizuno began to develop his own baseball products in 1913, and after twenty years, expanded his business into manufacturing golf equipment. The company’s first golf line was the Starline series, which Mizuno manufactured out of a small factory in Osaka, Japan. Mizuno became notable for developing a more efficient molding process for golf irons, which had thus far been made traditionally with one mold. Mizuno used a unique two-mold forging process, which was more precise, and required less grinding by hand. This improved the consistency and performance of Mizuno’s clubs, putting them in high demand. Mizuno continued to go against trends throughout the following decades, including in the 1990s when instead of following the new casting process for making irons, the company invested in its own patented Grain Flow Forging, which was once again a more precise process. Mizuno also refused to engage in sponsorships of players in order to sell its clubs, instead insisting upon winning customers by the quality of their products rather than the voices of paid professionals. Today, Mizuno Golf is still run by the Mizuno Family, with Rihachi Mizuno’s grandson, Akito, serving as its current president. The company currently sells a variety of clubs, including the Mizuno Pro and JPX921 Series of irons, the ST-220 Series of woods, the T-22 and ES21 Series of wedges, and many others. As of the modern day, the company does sign some golf players to represent them, among them Greyson Sigg, Keith Mitchell, Luke Donald, and Olivia Cowan.