Top 5 Golf Rivalries of All Time 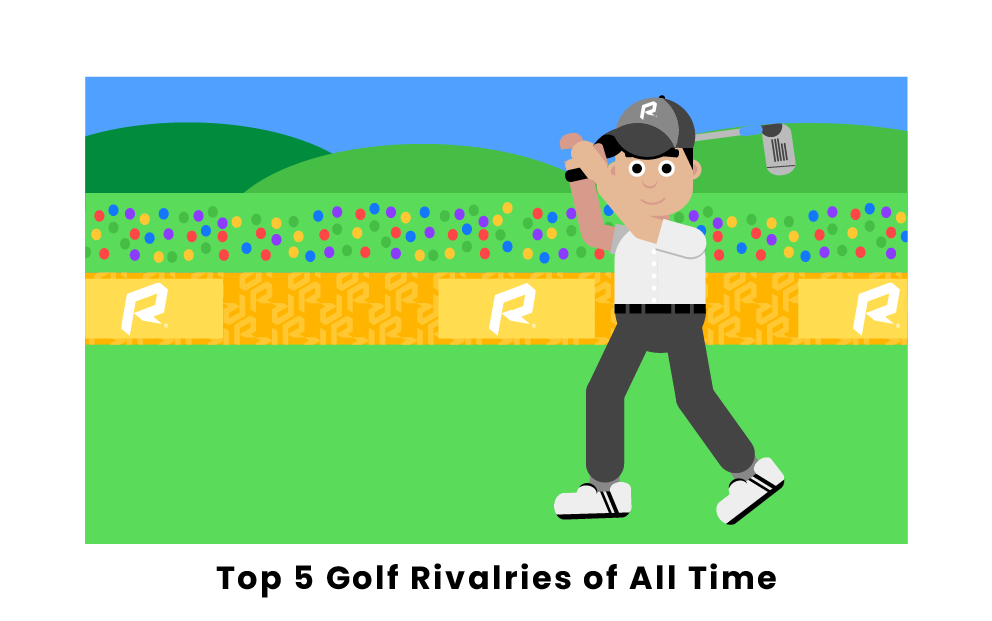 Golf has produced some of the most exciting rivalries across all sports. They’re unlike most sports rivalries because golf is independent, meaning all rivalries are solely individual vs. individual. These intense matchups can last for decades but typically end in a friendly and respectful manner.

What are the biggest golf rivalries of all time?

When Tiger Woods was in his heyday from the early-to-mid 2000s, almost nobody could touch him. However, there was a consensus that the second-best player in the world was Phil Mickelson, and a rivalry was born. The two famously dueled in the 2001 Masters when they were both one-two heading into the final round. Woods outplayed Mickelson to capture his second career Masters. However, their most famous matchup wasn’t even in a major; it was the 2005 Ford Championship at Doral, better known as the “Duel at Doral.” Tiger shot an incredible 24 under for the championship, while Mickelson fell just one shot short.

The Jack Nicklaus and Tom Watson rivalry is often overshadowed, but the two have competed head-to-head in very tight matchups. Nicklaus turned pro in 1961, and a decade later Watson became a professional as well. When the two were both playing, they combined for 18 majors championships. Their most memorable duel was the 1977 Open Championship at Turnberry, Scotland, known as the “Duel in the Sun.” Watson had bested Nicklaus at the Masters by two strokes weeks earlier, setting the stage for an all-time classic. They were paired for the final round, and each shattered the Open Championship record score. However, it was Watson who once again edged out Nicklaus. This time by just one stroke.

Arnold Palmer and Jack Nicklaus were intense rivals. Palmer was known as golf’s most popular player, while Nicklaus was the greatest at the time. From 1962-64, they won half the majors (three each) and combined for five runner-up finishes. However, the Palmer and Nicklaus rivalry isn’t defined by their dominance. It’s actually their friendship. In 1963, Nicklaus had just qualified for the Tournament of Champions in Las Vegas. While there, he recalls how Palmer taught him how to play craps. Their families grew to be great friends as well. Ultimately, their rivalry was defined by their friendly competition against each other.

The rivalry between Brooks Koepka and Bryson Dechambeau is unique in the sense it’s not defined by any legendary tournament duels against each other or friendship. It’s actually personified by a feud that began in 2019 when Koepka indirectly called out Dechambeau for his slow play at the Dubai Desert Classic. From there, the two have taken subtle jabs at each other for the better part of two years. These comments all led up to “The Match,” which took place on November 26, 2021. Koepka and Dechambeau competed head-to-head in an 18 hole match play event, with Koepka winning the match by a score of 4&3.

Paul Azinger and Seve Ballesteros have produced some of the greatest moments in Ryder Cup history. The two squared off against each other in the 1989 and 1991 Ryder Cup. In 1989, Azinger famously disputed a scuffed ball on the second hole, which set the stage for all-time gamesmanship and bitterness. Ballesteros then disputed a drop Azinger took out of the water on the final hole. Two years later, the two faced off again, this time as two vs. two. Azinger would call Ballesteros the “the king of gamesmanship” while Ballesteros called the American team “11 nice guys… and Paul Azinger.”

What is the biggest golf rivalry?

Nobody has had a bigger impact on golf than Tiger Woods, and nobody has ever been as dominant as he was in the early-to-mid 2000s. Tiger wasn’t just a great player, he was also incredibly intimidating. However, the one man who didn’t feel that way was Phil Mickelson. He was the only one who could stand up to Woods as he always welcomed the challenge of playing against the best player in the world. This, along with Mickelson’s ability, made him the second-best and most popular player in the sport at the time of Woods’ peak.

What is the oldest golf rivalry?

One of the all-time throwback rivalries is Ben Hogan and Byron Nelson, who both played at the same time on PGA Tour from 1935-1946. In that 11 year span, the two combined for 85 tournament victories and six major championships (Nelson had five). In 18 Major tournaments, Nelson finished ahead of Hogan 12 times, while Hogan just three times. Essentially, when Nelson was at his apex, Hogan had difficulty competing against him. However, they were both the best two players in the sport at the time.

Which golf rivalry has the most major wins between the two?

Jack Nicklaus and Tom Watson combined for 26 major championships. Currently, Nicklaus holds the all-time record for major victories (18), and he and Tiger Woods are the only players to win every major at least three times. On the other hand, Watson won eight major titles, with the PGA Championship being the one championship he didn’t win.

Pages Related to Top 5 Golf Rivalries of All Time