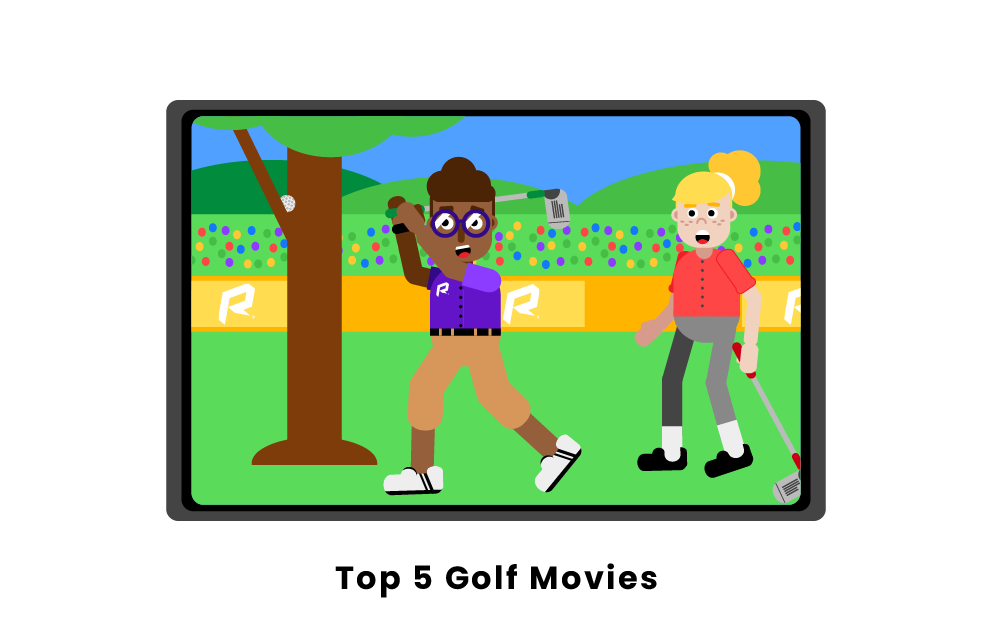 What are the most popular golf movies?

Caddyshack is known to be one of the greatest golf films ever. In fact, ESPN and Time Magazine said it was the funniest sports movie of all time. The movie follows a young caddie named Danny who is working to earn money so he can go to college. When the opportunity presents itself for Danny to compete in the Caddie Scholarship tournament, he must put everything on the line to get his life back on track. The movie is known for the many golf course subplots, including the groundskeeper Carl hunting a menacing gopher that is terrorizing the golf course.

Although the movie was released in 1980, it is still loved to this day and is considered an all-time favorite. Famous actors including Chevy Chase, Ted Knight, and Bill Murray were cast in the movie. Over the years since its release, Caddyshack has won multiple awards, including ranking number two on Bravo’s “100 Funniest Movies.” The success of the hilarious portrayal of golf in Caddyshack has earned its spot as the most popular golf movie of all time.

In one of Adam Sandler’s greatest performances, Happy Gilmore tells the story of a struggling hockey player named Happy who is trying to raise money to pay for his grandmother’s house after she becomes evicted. While messing around at a driving range, Happy discovers that he has the ability to hit a golf ball hundreds of yards. When the opportunity arises for Happy to play on the prestigious golf tour, he battles against pro-golfer Shooter McGavin to win the championship tournament money and save his grandma from eviction.

Happy Gilmore is one of the greatest golf movies due to its hilarious portrayal of how professional the sport of golf really is. Happy tends to fight fans, dive into ponds, and slam his clubs after every bad shot. With only a $12 million budget, the movie ended up earning $41.2 million, as well as winning an MTV Movie Award. Although the movie is almost 25 years old, it still is recognized as one of the funniest golf portrayals to this day.

3. The Greatest Game Ever Played

The Greatest Game Ever Played, which is based on a true story, follows amateur golfer Francis Ouimet and his early life in 1913. At that time, golf was a sport only played by the rich and wealthy. The movie tells the story of Ouimet’s life growing up, coming from an immigrant family and becoming a caddie at a very young age. When the opportunity arises for Ouimet to play in the 1913 U.S. Open, he must go against all odds to prove himself.

Francis Ouimet is played by famous actor Shia Labeouf, and the cast also includes Stephen Dillane and Elias Koteas. The movie was nominated for multiple awards, including the “Best Sports Movie” at the ESPY Awards in 2006. Compared to some of the other famous golf movies that settle in the comedy genre, The Greatest Game Ever Played is known for its heart-warming and emotional story. The movie is rated PG and is enjoyed by both golfers and those unfamiliar with the sport.

Tin Cup is a fictional movie about a washed-up golf pro, Roy McAvoy, who lives and works at a rundown driving range in Texas. When McAvoy’s golf enemy from the past, PGA superstar David Simms, shows up to the range with his girlfriend, McAvoy gets inspired to get back into the competition to try and win the U.S. Open and win the heart of Simm’s girlfriend.

The main star of the movie, Roy McAvoy, was played by Kevin Costner, and David Simms was played by Don Johnson. Tin Cup had a $45 million budget, and grossed over $53 million worldwide. Those not familiar with golf still love this film for it’s wonderful storyline. Tin Cup is still recognized as one of the greatest golf films due to McAvoy’s journey throughout the movie. From starting as a failure with nothing in life, he pushes himself to rekindle his love for the game.

5. The Legend of Bagger Vance

The Legend of Bagger Vance is based on the novel, The Legend of Bagger Vance: A Novel of Golf and the Game of Life by Steven Pressfield. This movie tells the story of war veteran Captain Rannulph Junuh returning from war and struggling to get back to normal society. Captain Junuh finds no meaning in the sport of golf, but when caddie Bagger Vance joins him for a round, everything changes. Bagger seeks to teach Captain Junuh the secret of golf and the meaning of life.

The Legend of Bagger Vance starred some big Hollywood stars, including Will Smith and Matt Damon. The movie grossed almost $40 million and received numerous great reviews for the positive messages displayed in the movie. The Legend of Bagger Vance is recommended for anyone looking for a heart-warming film. Although the movie is all about the sport of golf, anyone would enjoy watching this Hollywood hit.