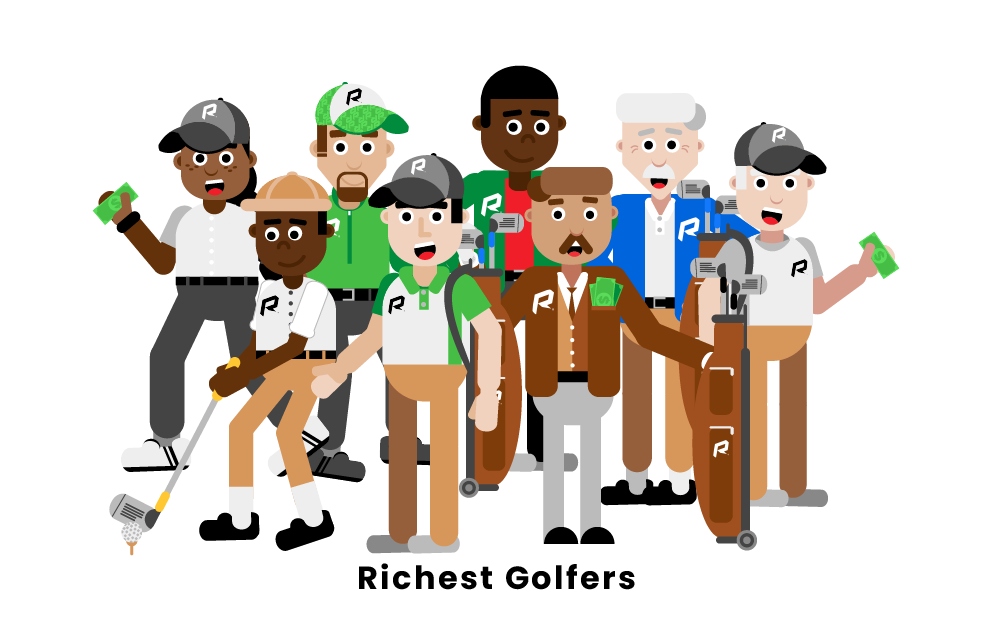 Who are the richest golfers of all time?

Arnold Palmer was an American golfer with an estimated net worth of $875 million. He won 62 professional golf tournaments from 1955 to 1973. Among those wins, he also was able to win 10 tournaments on the Championship Tour. Arnold Palmer is known to be one of the greatest golfers of all time. In 1974, Palmer was inducted into the World Golf Hall of Fame.

Arnold Palmer died on September 25th, 2016. Throughout his life, his golf earnings and external revenue brought him around $1.3 billion. His estate racked in over $40 million the year after his death, making him the second-highest-paid deceased celebrity in the world.

Tiger Woods is one of the greatest golfers ever, with a net worth of $800 million. He has tallied 82 PGA Tour wins and 15 majors throughout his professional career, and is still playing today. Since Tiger turned pro in 1996, he has earned more than $1.4 billion from sponsors. His success in golf has led him to purchase a $55 million mansion in Jupiter, Florida, which has a private golf course and a 155-foot yacht.

Although most of his money comes from those endorsements, Woods was still able to win over $120 million in tournament money. Tiger Woods still plays on the PGA Tour and will most likely pass Arnold Palmer as the richest golfer of all time.

Phil Mickelson is an American golfer who has a net worth of $400 million. He has won an impressive 45 PGA Tour events and has numerous endorsement deals. Mickelson has also won six major championships, three of which were Masters victories. In 1992, he first joined the PGA Tour and continues to play to this day. In fact, he had the longest streak ranked in the top 50 golfers at 26 years.

Mickelson has won over $88 million in tournament prize money throughout his career. A significant proportion of his earnings have also come from endorsements. He is sponsored by Callaway, KPMG, Exxon Mobil, and Amgen, further boosting his net worth.

Known as the Golden Bear, Jack Nicklaus is one of the greatest golfers of all time and has a net worth of around $320 million. Through his 25 years playing on the PGA Tour, Nicklaus won 73 PGA Tour events, 18 of which were majors. He was inducted into the World Golf Hall of Fame in 1974 and also founded his own tournament, The Memorial, which is held annually in Dublin, Ohio.

Jack Nicklaus is also a very well-known course designer, earning him a large sum of money. Working with his younger sons, they opened Nicklaus Design, which has designed over 410 courses in 45 different countries.

Greg Norman is an Australian professional golfer with an estimated net worth of $300 million. He has won a total of 91 professional golf victories between the PGA, European Tour, and Australasia Tour. He has also won two first-place trophies at the Open Championship. A majority of Greg Norman’s profits have come from his business ventures. Norman has designed golf bags, an apparel line, an eyewear label, and even a wine company that he started in 1996. Along with that, he has a partnership with a real-estate firm, a golf academy, a private equity firm, and a wakeboard park. Greg Norman is easily one of the richest golfers ever due to his ability to succeed as both a golfer and an entrepreneur.

Gary Player is a retired South African professional golfer who currently has a net worth of $250 million. He stands at third for most professional wins in the history of the PGA. Player has 163 professional wins throughout his career, nine of which were major victories. When Gary Player started playing golf at the age of 14, it only took him three years before he was able to turn professional.

His success has even extended past golf by opening many business ventures, including a real estate firm and a golf academy. He is known to have one of the greatest fan bases in the world due to his easy-going personality and love for the game of golf.

Rory McIlroy is an Irish professional golfer with a net worth of approximately $130 million. He has been a star on both the PGA Tour and the European Tour. Since becoming a professional in 2017, McIlroy has won 20 times on the PGA Tour and 14 times on the European Tour. He even won four major championship events, including the PGA Championship in 2012 and 2014.

Although he hasn’t won a major championship since the 2014 PGA Championship, McIlroy still makes plenty of money from his endorsements. One of the biggest endorsements in sports, McIlroy has been a Nike supporter for years.

Fred Couples is an American professional golfer; his net worth is estimated at $120 million. Couples started playing on the PGA Tour in 1980, and in 1992, he was ranked the number one golfer in the world and stayed at number one for 16 straight weeks. He came in first at 15 PGA Tour events throughout his career. At the 1992 Masters at Augusta National Golf Club, Couples won his first and only major victory.

Similar to other professional golf players, Couples has been an important part of designing some of the most beautiful golf courses in the world. In 2011, Couples won his first-ever senior major at the Seniors Player Championship.

Jordan Spieth is an American professional golfer with a net worth of $110 million. He first discovered a passion for golf at the age of 12. Nine years later, at the age of 21, he won both the Masters and the U.S. Open in the same year. When he was 23, he won his third major victory at the 2017 British Open.

Although Spieth hasn’t had a major victory since 2017, his endorsements have significantly boosted his wealth. His endorsements include the following companies: Wheaties, Coca-Cola, and Rolex. In 2018, he was ranked as one of the top 25 highest-paid athletes in the world.

As one of the tallest golfers ever to play on the PGA Tour, Ernie Els, or “The Big Easy,” has a net worth of $85 million. Coming from South Africa, Ernie has won 19 times on the PGA Tour and 28 times on the European Tour. One of his most remarkable statistics includes being one of six golfers to win both the U.S. Open and Open Championship twice. In 2011, he got inducted into the World Golf Hall of Fame.

Ernie Els’s net worth mainly came from all of his tournament wins, along with some endorsements. Like other wealthy golfers, Els currently runs a golf course design business and a charitable foundation that supports underprivileged kids in South Africa.

Vijay Singh is a highly-decorated professional golfer with an estimated net worth of $75 million. Singh has won three major championships in his career and a total of 34 PGA Tour events. He was ranked number one in the world for 32 weeks in the 2004-2005 season.

Sergio Garcia is a Spanish professional golfer with an estimated net worth of $70 million. He plays on both the PGA Tour and the European Tour and has made over $40 million in prize money. Not only has he won 36 professional tournaments around the world, but he also won the 2017 Masters tournament. At the highest point of his career, he reached the number two ranking in the world.

Nick Faldo is a professional golfer from England who has a net worth of $60 million. He has a long list of accomplishments as a golfer, including six major championship titles. At one point in his career, he was ranked as the number one golfer in the world for 97 weeks. Faldo was inducted into the World Golf Hall of Fame in 1998. His net worth stems from multiple sources of revenue, including his tournament wins, numerous endorsements, business investments, and his career as a television commentator following his retirement from professional golf.

What is the most money ever earned in a PGA season?

Jordan Spieth currently holds the record for the highest earnings in a PGA season. In his 2014-2015 year on tour, Spieth earned over $12 million after he won the U.S. Open, Masters, and Fed-Ex Cup. In the same season, he also came up on top at the Valspar in March, John Deere Classic, and the Tour Championship. He also was named the PGA Player of the Year for his incredible season.

Which golfer receives the most profits from endorsements?

Tiger Woods has made the most money from endorsement deals out of any professional golfer. Tiger has earned more than $1.4 billion from sponsors throughout his career. These sponsors include many reputable companies, including Nike, Monster Energy, GolfTV, Taylormade, Centinel Spine, and Bridgestone Golf. In second is Phil Mickelson, who has earned $40 million from his endorsements, which include Callaway, Exxon Mobil, Rolex, and KPMG. Other golfers with the highest endorsements include Rory Mcilroy, Jordan Spieth, and Justin Thomas.

Which golf tournament has the highest purse amount?

Although the PGA is known for giant sums of money awarded to their victories, the United States Golf Association (USGA) prohibits amateurs from accepting tournament money. The rule is called the USGA Rule 3-1 and states that an amateur player cannot play for money in any match, exhibition, or tournament. The USGA states that this rule is what strictly distincts the PGA from the amateur league.