5 Most Common Golf InjuriesArnold Palmer Bio And FactsDo Caddies Play Golf?Golf Scramble vs Best Ball FormatsHow Do You Add Spin With A Wedge Club In Golf?How Do You Add Spin With An Iron Club In Golf?How Does Golf Betting Work?How Does Scoring Work In Golf?How Far Can You Hit The Ball With A 3-iron In Golf?How Much Money Does A Golf Caddy Make?How To Spin A Golf Ball Backwards On The Green?How do Rankings Work in the Golf World Amateurs?Is Golf A Good Workout?Is Golf An Olympic Sport?Jack Nicklaus Bio And FactsJordan Spieth Bio And FactsPhil Mickelson Bio And FactsRory Mcilroy Bio And FactsTiger Woods Bio And FactsTop 10 Golf BooksTop 10 Golf BrandsTop 10 Golf TournamentsTop 10 Golf Video GamesTop 10 Richest GolfersTop 5 Golf MoviesWhat Are The Hardest Holes At Augusta National?What Club Is Used For Chipping In Golf?What Is A 6 6 6 Golf Tournament?What Is A Good Score In Golf?What Is The Best Grip For Playing Golf?What are the most important Golf Rules?What are the rules of golf?What is a 2 on a Par 5 in golf called?What is the 19th Hole in Golf?Where Are The Next 5 British Opens?Who Are The Richest Golfers?Who Is The Oldest Player On The Champions Tour?Why Is Golf Expensive To Play?Why Is It Called A Bunker In Golf? 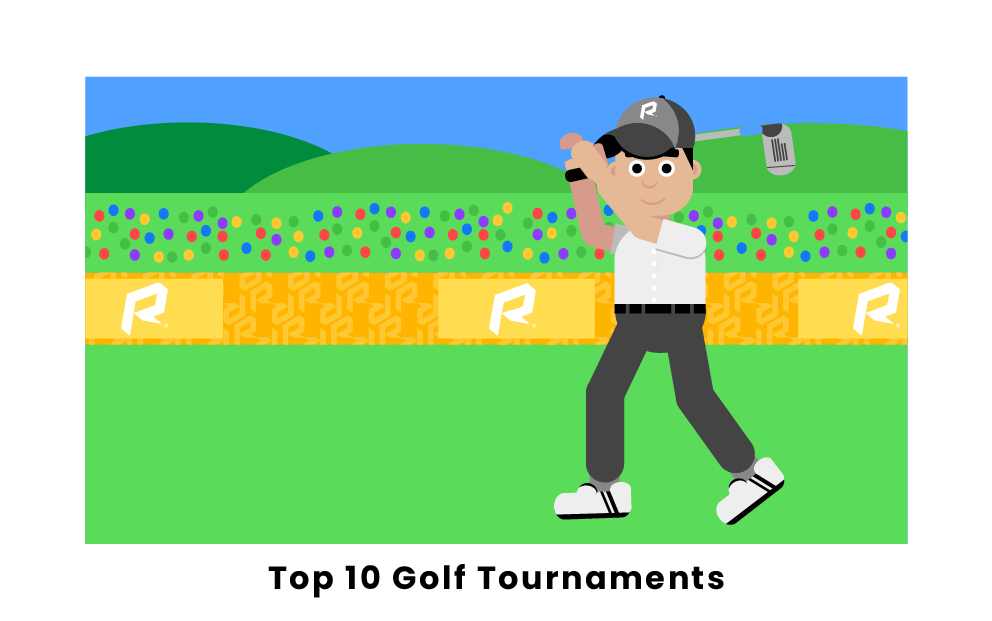 What are the most popular golf tournaments?

The Masters, one of golf's four major tournaments, is widely recognized as the most prestigious golf tournament in the world by both players and fans, making it the clear pick for number one on this list. The Masters is played at Augusta National Golf Club, a fan favorite course that many consider the most scenic in the world. Winning the Masters is the feat that all professional golfers dream of and watching the Masters is the event all fans can't wait to do. Because winning the Masters is such a difficult task, it is no surprise that the two greatest golfers of all time also have the most Masters wins (Jack Nicklaus with 6 & Tiger Woods with 5). In the golf world, there really is nothing that compares to winning the Masters, earning the illustrious green jacket, and cementing yourself among the greats.

The U.S Open is another extremely popular golf tournament, especially for American born players. The U.S Open is the third major championship to appear on this list, but it can be argued that the U.S Open could be number 2. For one, the total purse for the tournament is upwards of $12 million, which is more than both the Masters and the Open Championship. The only knock on the overall popularity of the U.S open is that it does not have as much exposure in Europe. Make no mistake, the U.S Open is as popular as anything in American golf culture.

Despite being universally viewed as the least significant major on the PGA tour, the PGA Championship is still an incredibly difficult tournament to win, especially in an era where major championships largely define one's legacy. Similar to the U.S Open, the PGA is typically known for creating tough playing conditions with thick rough and hard greens, giving the best in the game a chance to prove their ability on the big stage.

After the Players Championship, the Memorial Tournament is the second most popular non-major championship. The Memorial tournament is played at Muirfield Village Golf Club, a facility that is maintained by the great Jack Nicklaus. Because Jack Nicklaus is such an inspiration to so many players on the PGA tour, it is easier to see why this tournament holds a special place in the hearts of many players, especially Tiger Woods who has won the tournament an astounding five times. In an era where major golf tournaments are seen as far more important than standard PGA events, the Memorial does a great job of creating a special environment that players love to play in.

Coming in at number seven is the Tour Championship, a unique PGA event that allows the golfers with the 30 most Fedex Cup points to compete for the season crown. Although major tournaments are still viewed as superior in terms of measuring individual legacy, winning the Tour Championship & subsequent fedex cup is still viewed as an incredible accomplishment in the golf world.

Similar to the Memorial tournament, the Arnold Palmer Invitational is another non-major tournament that finds its way onto this list because of the historic player that champions the event. Players love to show out at the Arnold, a tournament built up by the great Arnold Palmer, despite the fact, it doesn't have the biggest purse or the toughest conditions. For years to come, it will always be on the short list of must-attend tournaments simply because of the inspiration that Arnie had on the game of golf.

The ninth event on this list of top golf tournaments is the newly named, WGC - Fedex St. Jude Invitational. The St. Jude is another non-major event that made a name for itself as one of the premier stops on tour through its extensive relationship with St. Jude's children's hospital. Year in and year out, this WGC event raises millions for kids in dire need of help, allowing top players and fans to interact with them on a regular basis. For this reason, the Fedex St. Jude invitational will continue to be an extremely popular tournament from both a golf and philanthropic perspective.

The last golf tournament on this list is none other than the Ryder Cup. Taking place every two years, the Ryder Cup is a team event where 24 of the best American golfers face off against 24 of the best European golfers in a match play event. The Ryder Cup has a history of intense individual battles and heroic team play, all of which mimic Olympic style golf. This type of non-traditional atmosphere is exactly why the Ryder Cup is a fan favorite among fans, patrons, and players. It harnesses a truly unique style of golf that cannot be found in a normal tournament setting. Even though some casual fans enjoy rooting for individual players as opposed to entire teams, there is no denying that the Ryder Cup brings the best out of the players every time.