Top 10 Golf Courses in the World 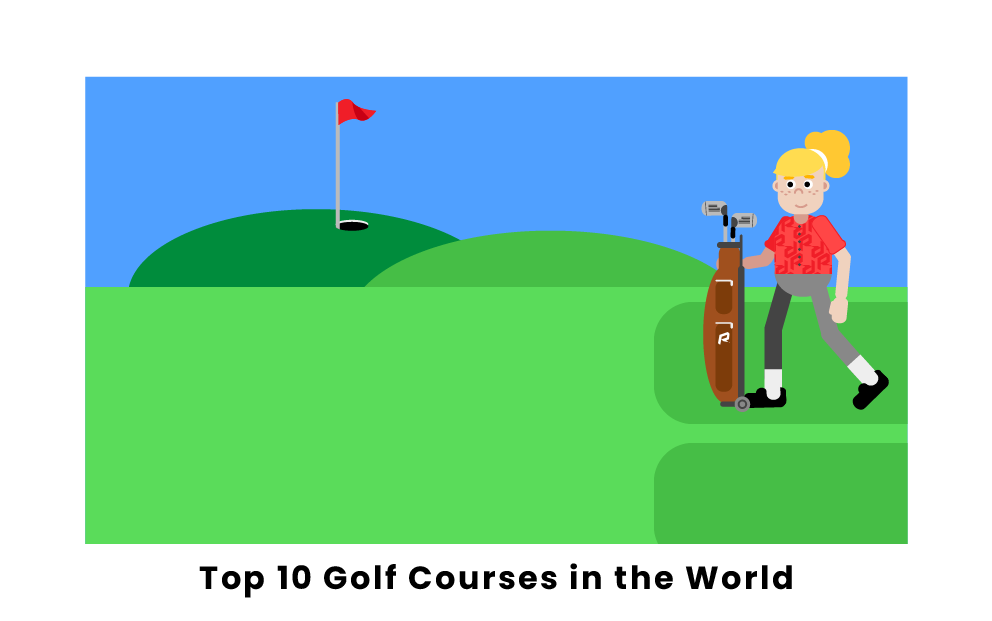 What are the top 10 golf courses in the world?

At the number one golf course is the beautiful Royal Down Country Club located in the United Kingdom, which features every view a golfer could want, from the Morne Mountains to the beautiful shorelines of Dundrum Bay. Royal Country Down has held dozens of British Championships spanning from professional to amateur tournaments. The course is also very popular for professional golfers, including major champion Rory McIlroy.

The course is known to have the best colors of sand, fauna, and sunsets for any golf course, including the 9th hole. The 9th hole is considered to be the most photographed golf hole in the world.

Coming in at the second greatest golf course in the world is the gorgeous Cypress Point, located very close to Pebble Beach in California. The course, which is designed by world-renowned designer Alister Mckenzie, features some of the most beautiful views to the Pacific Ocean. The course is also known to be extremely difficult, including one hole where the players must drive the golf ball over a control from the Pacific.

The course can only be played by members and currently does not have any major tournaments, but the views alone combined with the intense difficulty earns its spot as one of the greatest in the world.

Maybe the most well-known golf course on this list, the incredible Augusta National is a special course for any amateur or professional golfer. The tournament annually hosts one of golf's biggest tournaments, the Masters.

The course was built in 1933 by famous designer Bobby Jones, and the Masters has been forever acquainted with one golfer taking home the green jacket from capturing first place. Each hole is named after different plants that exist on the golf course itself. One of the most famous sections of the course includes Amen Corner, which is the area from the 11th to the 13th hole where a golfer can either jump ahead or fall desperately behind due to the difficulty of these holes.

Pebble Beach is a golf course located in the United States on the Monterey Peninsula in California. The course is known to be the one of the greatest and most beautiful public golf courses in the United States. Although anyone can go and tee off, it still usually costs around $500 per person to play a round there. The course has hosted 6 major championships who had famous victors such as Tiger Woods, Jack Nicklaus, and Gary Woodland.

The course includes giant rocky coastlines and breathtaking views of the oceans, which have both taken thousands of lost golf balls over the years. In 2027, the U.S. Open is expected to return to Pebble Beach.

Royal Melbourne hosts many high-profile events, including the Australian Open and the Presidents cup, which has seen victories from legends such as Gary Player and Tom Watson. This course was designed by the golf course architect Alister McKenzie, and is loved by some of the greatest golfers in the world. They specifically love the course due to the tough doglegs and fast-sliding greens, which make the course so challenging.

The Old Course, also known as The Home of Golf, has been played at the Royal and Ancient Golf Club of Saint Andrews since 1754. Hosting over a dozen Open Championships, Saint Andrews is considered vital to the formation of the modern golf game.

The course has multiple unique features, such as seven greens that are shared between two holes and a 700 year old bridge that every player must cross on the 18th hole. St. Andrews also includes a beautiful clubhouse that famous players Bobby Jones and Jack Nicklaus have walked through. The beauty both within and around this beautiful course in the United Kingdom makes it one of the greatest courses in the world.

As one of the oldest incorporated golf courses in the United States, Shinnecock Hills in Long Island, New York is one of the greatest golf courses due to its immense tournament history and incredible design, which is based off of some of the famous courses on the British Isles.

Created in 1891, Shinnecock Hills has hosted five U.S. Opens, and has been played by some of golf's greatest golfers including Brooks Koepka and Raymond Floyd. As one of the first five courses included in the USGA, its rolling hills and beautiful scenery cannot take away from it's extreme difficulty.

Home to the legendary Memorial Tournament in Dublin, Ohio, Muirfield Village was founded by Jack Nicklaus, one of the all time best golfers. The area contains two courses, one which is the official PGA Muirfield Village Golf Club, and the other which is constantly being changed and redesigned. Jack Nicklaus loves to constantly create more holes to challenge the best golfers in the world.

Not only has Muirfield Village hosted the Memorial Tournament, but has also hosted multiple US. Amateur tournaments and the 1992 Ryder Cup. Jack Nicklaus, also called the Golden Bear, continues to contribute to his famed course, which is why it is one of the greatest golf courses of all time.

Merion Golf Club is a beautiful course situated in Delaware County, Pennsylvania that has hosted five U.S. Open Tournaments. The course is full of rich history and has been played by golf legends such as Bobby Jones and Ben Hogan.

The course is extremely difficult and contains many obstacles, which is why golf carts are not accepted on the course. Players who are fortunate to get a tee time are also expected to treat the course with the highest level of respect. To make it even more interesting, each flag stick is fitted with a red wicker basket on top, which is still a huge mystery to all golfers. Merion Golf Course's incredible history and strong emphasis on tradition makes it a fantastic course to play.

One of the most revered golf tracks in the United States, Pine Valley Golf Club is every golfer's dream. Located in Southern New Jersey, Pine Valley has consistently been placed at the top charts, especially for professional golf legends Arnold Palmer, Jack Nicklaus, and even President George H.W. Bush.

Although it has never hosted a major championship, the course is still known to be one of the most difficult due to the natural water hazards and giant sand traps. People who are fortunate enough to play rarely make par. Pine Valley's reputation by some of the most famous golfers in the world is the reason why it is one of the greatest golf courses in the world.

Pages Related To Top 10 Golf Courses in the World