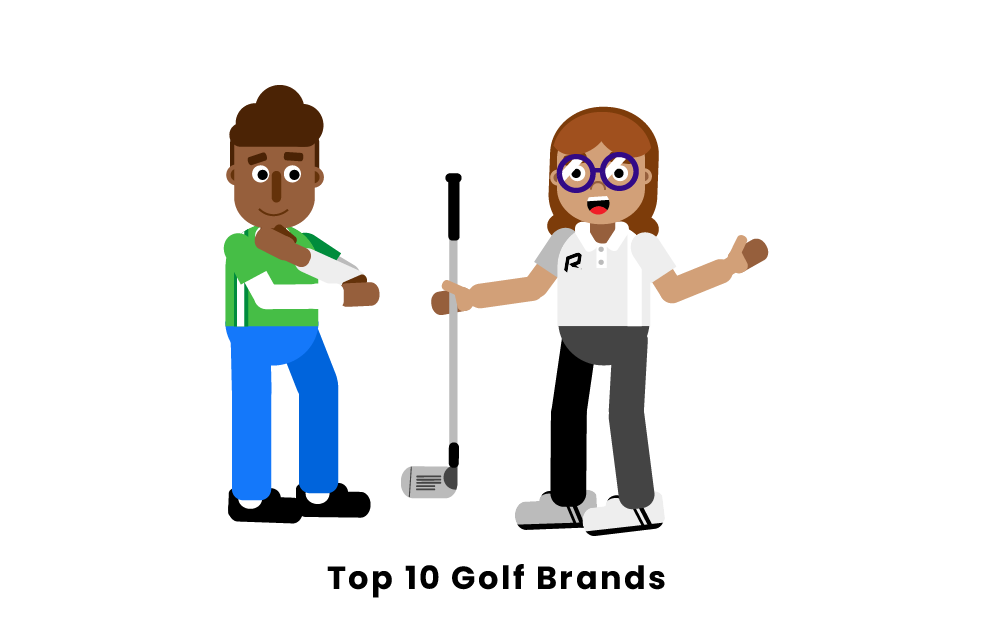 Golfers have a wide variety of brands to choose from when putting together their equipment. This list compiles the most popular golfing brands among professional golfers and recreational players.

What are the most popular golf brands?

Callaway Golf is the largest golf equipment manufacturing company in the United States, specializing in golf clubs, bags, balls, apparel, and gloves. Callaway has a well-established brand identity and is known for producing premium golf equipment. The brand is especially well known for producing great drivers, fairway woods, and distance irons, which were all awarded gold by Golf Digest's Hot List in 2018. The brand began its journey when the Callaway company changed locations to Carlsbad, California, in 1995. The company became popular by the end of the 1990s and would soon have many well-known players sporting the brand, including notable golfers such as Phil Mickelson, John Rahm, Xander Schauffele, and Carlota Ciganda.

TaylorMade is a major manufacturer of golf equipment that specializes in golf clubs. It was the company that brought metal woods into the golf club industry. TaylorMade is primarily known for its great drivers, two of which were rated gold by Golf Digest's Hot List in 2018. The company dates its origins back to when Gary Adams began showing his metal-headed drivers to pro players on the PGA Tour. In 1979 Adams took out a loan, started the company, and it quickly grew into one of the major brands within the industry. In 1998 it became a wholly-owned subsidiary of the Adidas Group and continued to buy out smaller golf companies to enrich their brand. The company is based in Carlsbad, California. Notable PGA Tour golfers endorsed by TaylorMade are Collin Morikawa, Dustin Johnson, Matthew Wolff, and Tiger Woods.

Titleist is a major manufacturer of golf equipment and the makers of the Pro-VI, the most widely played ball on the PGA Tour. They also make golf clubs, apparel, bags, and other golf equipment. They are known for having exceptional irons and putters that offer both distance and precision. The company is headquartered today in Fairhaven, Massachusetts, and is a highly respected brand within the golf industry. The famous Titleist script was first branded in 1935 on the company's first golf ball model. The company has achieved great trust in its brand after years of outstanding products and is backed by some of the world's best professional golfers, including Justin Thomas, Webb Simpson, Nelly Korda, and Jordan Spieth.

Ping has a long-held reputation for producing and manufacturing quality golf equipment. It is headquartered in Phoenix, Arizona, and has consistently sponsored top athletes within the sport. The company has been popular since the release of Eye 2 irons over 25 years ago and is known for its outstanding putters. In 1959, an engineer named Karsten Solheim was unsatisfied with the golf putters on the market at the time. He designed the first club known as the "Ping 1A" in his garage and called it the ping because of the sound it made when the metal club came in contact with the golf ball. Demand for this new design increased, and by the end of the 1960s, Ping had developed a whole line of clubs. Today's brand is well established and has several top players endorsed, including Bubba Watson, Harris English, Tony Finau, and Mackenzie Hughes, all on the PGA tour roster.

Nike is the United States' largest major manufacturer of athletic apparel, footwear, and equipment. The company produces golf and other major sports equipment such as basketball, football, lacrosse, and soccer. Nike is a global brand and extends its reach and impact far beyond the boundaries of the United States. The company was initially founded by former Oregon University Track & Field Coach Bill Bowerman. Nike has had sizable control of the athletic apparel and footwear market. They manufacture a variety of golf shoes and apparel but no longer produce clubs. Nike is based in Beaverton, Oregon, and endorses big names such as Tiger Woods, Rory Mcllroy, Michelle Wie, and Jason Day.

Cleveland Golf is an independently operated subsidiary of the Japanese company SRI Sports. The brand makes a full line of golf equipment, including clubs, bags, and headwear. The brand is well known for its great wedges and hybrid models for clubs. The company is headquartered in Huntington Beach, California, and was founded in 1979 by Roger Cleveland. The brand has a solid reputation within the golf community and is represented by PGA Tour golfers Hideki Matsuyama and Brooks Koepka.

Mizuno is a Japanese company that produces all types of sporting goods equipment, including golf, volleyball, soccer, baseball, and swimming. The company has a strong reputation as a global brand for producing some of the best irons in golf. Mizuno as a whole was founded in 1906 by Rihachi and Rizo Mizuno. Initially, the brand only produced baseballs until the Mizuno Golf brand was founded in 1982 in the United States. Mizuno Golf athletes on the PGA Tour include Keith Mitchell and Luke Donald

In 2010, Puma bought the Cobra Golf company and combined Puma's apparel and footwear with the golf equipment of the Cobra brand. Cobra was initially founded in 1973 by Thomas Crow. The brand began to grow and today is well known for its superior hybrid clubs. The company is very diverse, offering many different products and apparel pieces. Rickie Fowler and Bryson Dechambeau are the brand's top athletes on the PGA Tour.

Odyssey Golf is a company focused on its production of putters. The brand has a great reputation for making some of the best putters within the industry. The company was founded in 1991 and was later bought out by major golf company Callaway. They have the same headquarters in Carlsbad, California. The popular brand sells putters and accessories, including covers, grips, ball markers, divot repairs, towels, and umbrellas. The brand is well known for using red, black, and white color schemes with a swirl.

Bridgestone is a Japanese auto and truck manufacturing company that also produces golf balls and equipment. The brand is well known for its prestigious golf balls within the PGA tour and amateur golf. The original company was founded in 1931 but did not begin manufacturing golf balls until 1935. PGA tour athletes sponsored by the brand include Matt Kuchar, Bryson DeChambeau, Tiger Woods, and Fred Couples.

Tiger Woods, one of the most noteworthy names in the history of golf, has a few major golf brands supplying him with apparel and gear. In terms of his apparel out on the golf course, Tiger Woods represents the Nike swoosh each time he takes part in a tour. His golf ball of choice is Bridgestone Golf, and his clubs are produced by TaylorMade. Woods previously used Nike clubs; however, Nike stopped producing golf clubs in 2016 and Woods moved on to TaylorMade.

What is the oldest golf brand?

The oldest golf brand still around today is St. Andrews Golf Co. The company was founded in 1881 by George Nicoll and is based out of Scotland. St. Andrew's Golf Co. prides itself on being the "world's oldest club maker" and upholding traditional manufacturing methods. They offer uniquely handcrafted hickory sets unlike any other brand available today while also producing modern metal clubs.

What golf brand does Bubba Watson use?

Bubba Watson is an incredibly popular and successful golfer, with 12 PGA Tour wins to his name. Bubba Watson's iconic pink driver is produced by Ping, and he's known to use a Titleist ball when competing. In regard to apparel, Watson regularly sports Linksoul gear while out on the course. Each of these brands has the privilege of having Watson utilize their gear while competing on golf's biggest stages.