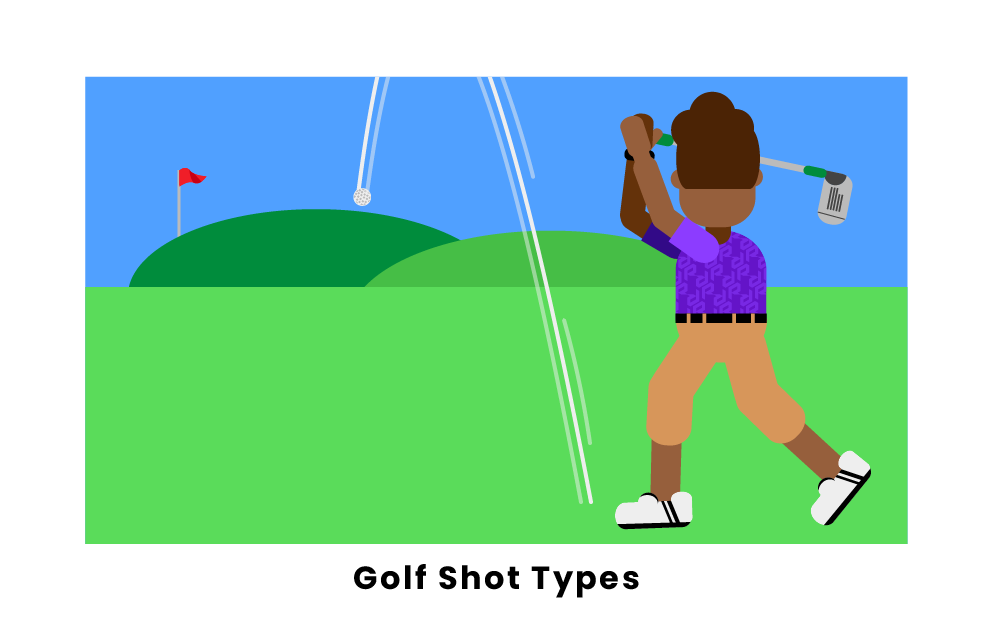 In golf, mastering the various types of shots made on the course is key to becoming a skilled and well-rounded golfer. A good game of golf depends upon how well a golfer can make a wide range of different shots with the variety of clubs in their bag. Many people often wonder what the most important shots in golf are, and here, we take a look at the six most vital shots to master in the sport, as well as a few others of importance.

What are the Most Important Shots in Golf?

In breaking down the most important shots in golf, we will take a detailed look at these six skills:

Driving is one of the most important and visible skills in golf and takes a lot of practice to master. Driving is most common on par four and par five holes, which tend to have longer distances to the green. The drive is almost always the opening shot, meant to gain as much straight distance towards the green as possible. As suggested by its name, drives are most commonly made with a driver, but they can also be made with other clubs, such as a 3-wood. The reason driving requires a lot of practice is because the driver itself is a notoriously difficult club to control due to the fact that it has a loft varying between 6 and 12 degrees, which is necessary to hit the ball straight and far. The most important difference between driving and other golf shots is the angle the club strikes the ball. While other shots use the club to strike the ball on the downswing, a driver must hit the ball on the upswing to gain lift and distance. This requires a different form than most other golf shots, making it a unique skill to master.

The second most important golf shot is the approach shot, which is a shot made after a drive that has not reached the green and is thus meant to get the ball onto or as close to the green as possible. By necessity, approach shots are shorter than drives but can still range from 170 to even 200 yards. The most common clubs used for approach shots are hybrids, middle irons, and wedges. Unlike a drive, which is almost exclusively about straightness and distance, the key to approach shots is precision and control. Golfers need to practice their approach from various places on a hole, learning how to moderate their swing and power in order to achieve the correct distance from their position to the hole. Accuracy is also important, and one of the key things to avoid in approach shots are mistakes such as slicing, which is when the ball starts out straight and then drastically curves due to the strike being off-target. The most important aspects of approach shots are meticulous accuracy, understanding one’s power, and correctly judging distance, which makes the approach a much more technical shot than a drive.

After approach shots, pitching is the next most important skill on the golf course. A pitch shot typically occurs within 100 yards of the green and makes use of a pitching wedge or a 9-iron to hit the ball in a shallow flight that is about the height of the pin, hopefully landing it on the green. Pitch shots are defined as such because they spend more time in the air than on the green. An important part of pitching well is the ball’s trajectory and the angle of the club shaft. Generally, it is better when pitching to have the golf club in a forward shaft lean when setting up the shot, meaning that when the club rests behind the ball, the shaft leans slightly over it and maintains that angle when swinging. This reduces the club’s bounce when hitting, resulting in a smoother shot with backspin and allowing the golfer to slow down and make a more measured attack on the green.

Chip shots are another common form of golf shot and occur when the ball lies just beyond the edge of the green. Chips are usually made with highly lofted clubs such as short irons or wedges and are characterized by being soft, short shots meant to generate some height on the ball, but much less distance, ideally resulting in the ball rolling out onto the green towards the hole. The best way to chip a ball onto the green is with a short, downward strike on the ball, not too steeply, but not at such a shallow angle that the ball flies forwards instead of upwards.

Next to driving and approaching, putting is one of the most important skills to master on the golf course. Putts are the final shots of a hole, which involve gently tapping the ball across the green and into the hole. Like approach shots, putts are highly dependent upon meticulous thought, judging of distance, and the application of proper force. Putts are made with special clubs known as putters, which have flat heads designed for tapping the ball forward. The keys to a good putt are a solid grip on the putter, good posture, and a smooth swing that accurately employs the amount of power needed to get the ball to the hole. There is, unfortunately, no simple trick to putting besides practice, as practice will allow a golfer to understand how their putters work, how much force they need to produce various distances, and how the ball will behave on various greens. Like driving ranges, there are also many dedicated putting greens designed specifically for golfers to practice these vital shots.

The final important shot a golfer should practice extensively is the bunker shot, which is a shot that is necessary after one’s ball has fallen into a bunker or sand trap. Bunker shots are important to master because the surface they are shot from is much different than grass, and they are often impeded by other obstacles, such as the steepness of the bunker. Bunker shots are typically made with sand wedges, and different techniques are required depending on the type of bunker being played from. In a fairway bunker, golfers will want to focus on making a clean hit that carries the ball out of the trap and further down the fairway. However, in greenside bunkers, which are often steeper, the key is getting out and onto the green. Hitting out of a greenside bunker is one of the few situations where golfers tend to hit behind the ball. Bunker shots use a sharp, upward motion, causing a spray of sand that actually carries the ball up into the air, out of the bunker, and onto the green.

There are other important, but subtler shots that golfers may wish to practice in order to improve their game. These shots include:

Lay Up: A lay up is a common type of shot on holes with visible hazards such as bunkers or water. It can be made with any club and involves making a conservative effort to hit the ball just short of a hazard between the golfer and the green, based on the golfer’s lack of confidence in being able to hit beyond the hazard. Lay ups can be useful when one is certain that they will likely fall into a trap, as hitting close to a hazard will make the next shot easier.

Punch: A punch shot is typically used when a golfer’s ball is located amongst trees whose branches may obscure their target line. Punch shots can be made with any club, and the key is keeping the ball below the tree branches in order to clear the obstacle. Punch shots are also useful in strong winds and involve moving the ball backward in one’s stance and making a shorter swing.

Blind Shots: A blind shot, as suggested by the name, is any shot where the golfer cannot see their target. These shots may occur due to a previous bad shot or as a result of the hole’s design. The best way for golfers to hit blind shots is by knowing the design of the hole and understanding where the green is even though they cannot see it, and then choosing a landmark to aim for that will offer a better target line on the following shot.

Bump and Run: A bump and run shot is an uncommon but useful shot for getting on the green, and involves chipping the ball by hitting it like a putt, but with an iron, which results in it “bumping” onto the green and rolling towards the hole.

Flop Shot: A flop shot is often played from the lie above a greenside bunker or near water and uses a sand or lob wedge. The ideal is to hit a high shot with a good deal of backspin that sails over the hazard, lands on the green, and stops quickly without rolling far.

Lag Putt: A lag putt is a putt made on a long green when one’s ball is far away from the hole, and a golfer believes that a single putt will not be enough to reach the cup. Thus, lag putts utilize more strength and distance control in order to get the ball as close as possible to the hole for a tap-in. Lag putts make use of a more standard golf grip than regular putts and require a greater focus on speed than on straightness, as the idea is to gain enough distance to set up a better second putt, rather than simply reaching the hole.

There are a number of shots golfers must practice in order to improve the game and earn a better score. By focusing intensely on the shots described above, one can drastically improve their golf game and start on the path to a better round with every game that is played.