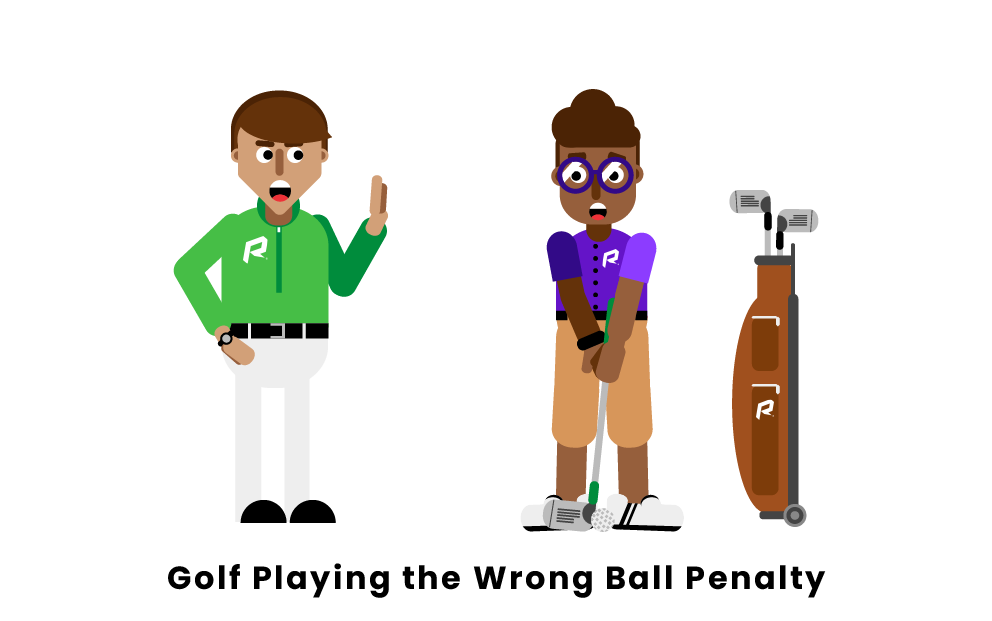 In golf, players are only allowed to hit the ball they teed off with, notwithstanding substitution or provisional balls. Whether accidentally or on purpose, playing the wrong ball results in a two-stroke penalty in stroke play or an automatic loss of a hole in match play.

In golf, playing the wrong ball results in a penalty of two strokes in stroke play and a loss of the hole in match play. The wrong ball is any ball that is not the original, substituted, or a provisional ball being used by the golfer. This includes their opponents’ or stray balls (leftover balls on the course from previous games).

In stroke play, for example, if a player with one stroke violates this penalty, they will now have three strokes. Furthermore, the player will have to correct their mistake by playing their original ball and replaying all nullified strokes. The penalized player’s score must also be corrected before they tee off on the next hole, failure to do so results in disqualification.

This penalty can take place at any time in a match. It most often occurs when opponents’ balls are placed near each other on the course, thus resulting in confusion.

Regardless of intent, if a player accidentally hits their opponent’s ball or does so purposefully, the consequence is the same. The only exception to this penalty is if the wrong ball is played while in a water hazard. In this case, the player will not be penalized. However, they must still correct their mistake.

To offset this penalty, players mark their balls with distinctive signs such as initials or color marks to indicate ownership. Additionally, players are given a chance to lift the balls in play if they are unsure about whose it is, especially in hazardous areas.

Playing the wrong ball results in different penalties across stroke play and match play. In stroke play, the result is a two-stroke penalty for the offending player. The player must then correct their mistakes by playing their original ball from its original position. Lastly, the penalized player’s score must be corrected before teeing off on the next hole (failure to do so results in disqualification). In match play, playing the wrong ball results in an automatic loss of the hole.

What does it mean to play the wrong ball in golf?

In golf, players are only allowed to hit their original ball, a substitution ball, or a provisional ball. Therefore, playing the wrong ball means playing any other ball, including their opponent’s or stray balls. This penalty often occurs when balls are in hazardous areas or those such as high grass where it is hard to identify whose ball it is.

What are the consequences of playing the wrong ball in golf?

In stroke play, the consequence of playing the wrong ball is a two-stroke penalty. Additionally, the violator will have to play their original ball to correct their mistakes. Their score must also be corrected before tee-off on the next hole; if not, they will be disqualified.

In match play, the consequence is an automatic loss of the hole.

If the ball is in a water hazard, the player will not be penalized for hitting the wrong ball, but they must still correct their mistake.

How can you avoid hitting the wrong ball in golf?

To avoid hitting the wrong ball in golf, players must keep a close eye on where they hit and should also remember their respective balls. While it is not required, Rule 6.3a of the Rules of Golf encourages players to mark their balls with distinctive signs such as initials or color marks to indicate ownership. Furthermore, players are permitted to lift the ball in play if they are unsure about whose it is, especially in hazardous areas.