Golf Playing Out of Turn Penalty 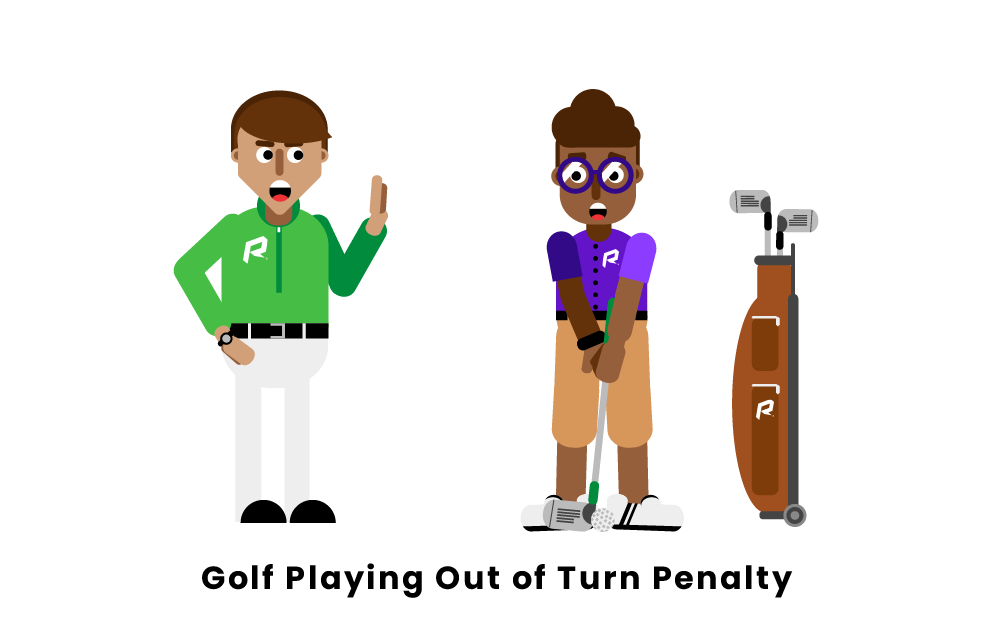 There are two types of play in golf: stroke play and match play. In both forms of golf, players must proceed through a hole in a set order. However, depending on the type of golf being played, different actions may be taken if a player violates the order of play.

In golf, there is a set order to who plays a hole first and in what order shots are taken. According to the United States Golf Association (USGA) Rules, it is generally frowned upon to play out of turn in certain forms of golf. Playing out of turn describes a scenario in which a player performs a stroke when it is not their turn to play.

Rule 6 of the USGA Rules describes how the order of play is to be determined in golf. In a game of match play, at the starting hole, the players individually decide who is to have the honor of the hole, also known as the first position, either by drawing sticks or some other method of choice, such as a coin toss. Thereafter, whoever has the lowest number of strokes on the previous hole only has the honor of the following hole, unless the hole is tied, in which case the person who had the previous honor retains it at the following hole. When balls are in play on the hole, whoever is farthest from the green plays first on each round of strokes it takes to complete the hole.

In stroke play, the method for choosing the order of play at the starting hole is the same as match play, as is the order of play on the proceeding holes. If two players have the same gross score after a hole, they play in the same order as they did on the prior hole. Similar to match play, when the balls are in play, whoever is farthest from the green plays first.

Playing out of turn has variable consequences depending upon the type of golf being played. In match play, the more formal type of golf, playing out of turn can often carry consequences. If a player plays out of turn, their opponent who has the right to play may demand that their stroke be canceled, forcing them to return to their previous place and play again when it is their turn. However, this must be done promptly before anyone else makes another stroke, and the stroke cancellation cannot be withdrawn. In match play, players may sometimes agree to play out of turn to save time.

In stroke play, it is often encouraged to play out of turn in a safe and responsible way, known as “ready golf.” For example, when two players wish to play out of turn to save time, a player hits their ball very close to the hole and chooses to “hole out,” or when one player is ready and able to play before another player whose turn it is, and their playing would not interfere with others. If a player plays out of turn to gain an advantage over others, or if two players agree to do so to gain one of them an advantage, they may receive a general penalty of two strokes.

Similar Penalties to Playing Out of Turn

What does it mean to play out of turn in golf?

What are the consequences of playing out of turn in golf?

Generally, there is no penalty for playing out of turn in golf, but depending on the type of golf being played, there can be consequences. In match play, a player who plays out of turn can have their stroke canceled by the player whose turn it was, but this must be done promptly. If so, the player returns to their previous spot and plays again. In both match play and stroke play, playing out of turn can occur legally if two players agree on it to speed up the game, but if players play out of turn to gain an advantage, they will be given a two-stroke penalty.

How do you decide who goes first in golf?

There are a number of rules regarding who plays first in golf, depending upon the type of golf being played. In match play, the person who plays first at the starting hole is chosen by draw or another method, such as a coin toss. Thereafter, whoever wins the hole plays first on the next hole, and so on, while during play, whoever is furthest from the green plays first. In stroke play, choosing the initial player is the same as match play, as is the order of play for the following holes, except where there is a tie between two players on one hole, in which case the tied players play in the same order they did on the previous hole. In stroke play, the order of turns when the balls are in play is the same as match play, with the player furthest from the green going first.

Pages Related to Golf Playing Out of Turn Penalty