Golf Picking Up The Ball Penalty 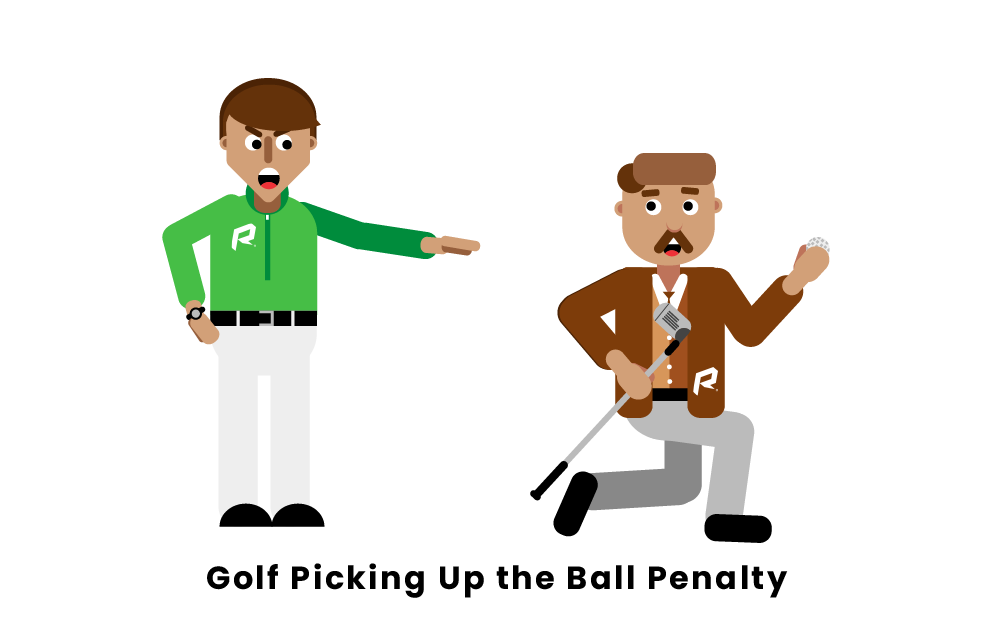 One of the fundamental rules of the game of golf is that all participants must play their balls as they lie; wherever a golf ball is struck and lands, it must remain there and be played from that spot. As such, it is against the rules of golf for a player to pick up or move their ball after it has been hit, except in rare scenarios where moving the ball is necessary due to extenuating circumstances.

The basic rules regarding the movement of a golf ball after a stroke has been taken are described in Rule 9 of the United States Golf Association (USGA) Official Rules. According to this rule, if a played ball lands and comes to rest after a stroke but is then moved by natural forces, such as wind or water, it typically must be played from the new spot where it comes to rest after that movement. If the ball is legally moved by the player, another person, or any other outside influence prior to the next stroke (for reasons discussed below), it must be replaced at the spot where it landed. In the vast majority of cases, any accidental or purposeful movement or picking up of the ball after a completed stroke will result in a penalty.

There are a number of reasons why golf players may desire to move their ball after a completed stroke. If the ball lands in a difficult area, such as rough grass, a sand trap, or near water, it may prove difficult to hit, and players may want to move it to a better position. However, this is not allowed by the rules of golf. According to the rules, a golf ball can only be moved after a stroke by natural forces or, in rare cases, a player is permitted to move the ball and take what is called relief. Relief is granted for a variety of situations, most notably when the ball has landed on the cart path.

The circumstances in which a ball can legally be picked up by its player and moved from the spot where it lands are discussed in Rule 14 of the USGA Rules. According to this rule, it is legal for a player to pick up their ball in order to see if it has been damaged, to identify it, to remove it because it interferes with play of another person’s ball, or to see if it meets standards for a penalty relief. In these cases, the removed ball must be marked by a ball marker and replaced in the exact spot it fell before the next stroke unless a penalty relief scenario is involved, in which case rules for moving the ball into the relief area apply.

If a player picks up and moves their ball for any reason other than those listed above or breaks other rules related to legally picking up a ball, such as by cleaning it, they will receive a penalty.

In golf, a penalty of one stroke is typically given for lifting a ball illegally or for lifting a ball legally while either: failing to mark it, marking it incorrectly, or playing it with a ball marker still in place. As a result of this penalty, the player is one stroke closer to or past par for the hole, increasing their overall score. This is a negative repercussion in golf, as having the fewest number of strokes is the key to winning.

Similar Penalties to Picking Up the Ball Penalty

What is a picking up the ball penalty in golf?

In golf, a penalty for picking up the golf ball occurs whenever a player illegally lifts their ball from the place where it has landed or when a player attempts to legally lift their ball but does so incorrectly. In golf, it is illegal to lift one’s ball after a stroke for the purposes of moving it to a better location, especially if it has been moved to its current location by natural forces such as wind or water. It is legal for players to lift their ball in certain cases, such as to identify it or inspect it for damage, or to remove it from interfering with another player. However, in doing so, the ball must always be marked by a ball marker and replaced in the exact spot where it fell. Violating any of these rules regarding the lifting of the ball will result in a penalty.

What are the consequences of picking the ball up in golf?

Whenever a golf player illegally lifts or moves their ball, the typical penalty is one stroke. This means that, if a player lifts their ball illegally, or lifts it legally without marking it, without replacing it in the exact spot it fell, or without removing the ball marker before the ball is played again, they will be moved one stroke closer to or past par. This is, of course, undesirable in golf, which is a game where the person with the lowest number of strokes wins.

When is it legal to pick up your ball in golf?

There are a number of instances in which it is legal for a player to pick up their ball in golf. Lifting a ball is legal if the player needs to identify whether a ball is their own ball, if the player needs to check the ball for damage, such as cracking or cuts, if the player needs to remove extraneous twigs or leaves from around the ball, or if it interferes with another player’s stroke. In any of these cases, the ball can be picked up, but it can only be moved by the player themselves. The ball’s exact spot must also be marked with a ball marker, which must be removed when the ball is replaced.

Pages Related to Golf Picking Up The Ball Penalty