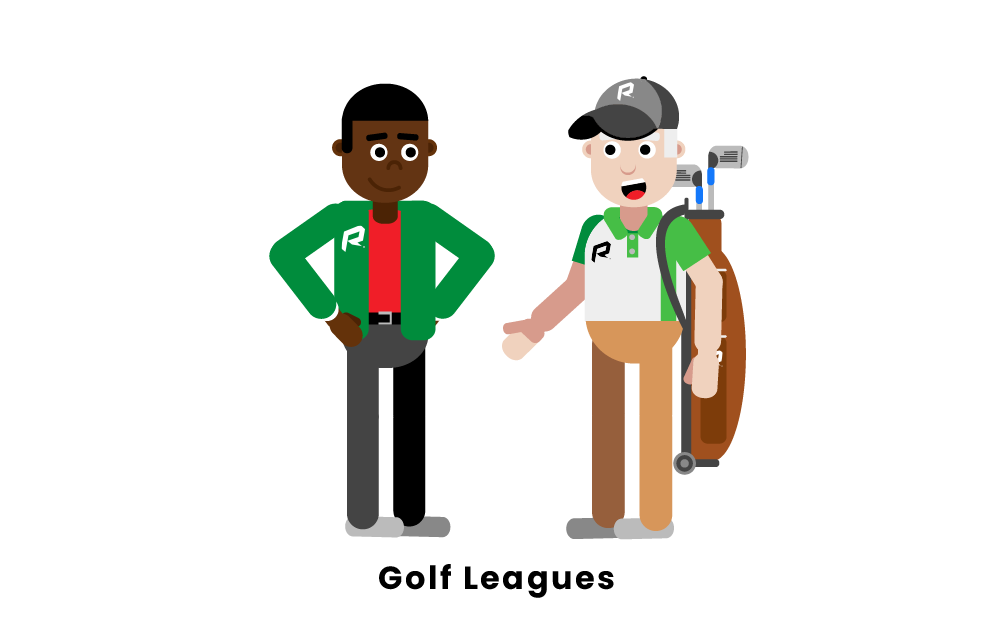 A golf league is a group of golfers who compete with one another at different golf courses. Usually, there is a fee to join golf teams that varies among the different leagues but usually does not get much higher than the greens fees for the courses. Many golf leagues have about 40 members and usually go up to 60 members equaling 15 foursomes. Most leagues require that their members know their handicaps, as leagues like to keep players with similar skill levels playing together.

There are a few different ways to keep track of scoring in golf leagues. One way to keep track of scores is through a handicap system for the average of a player’s 18 hole score. Another scoring method is to randomly draw partners at each outing, and partners combine their scores to compare them with the other duo they are playing. The last scoring method is to tally up all scores, and the person with the lowest score at the end of the golf season wins.

The most popular leagues in golf are recreational leagues that are played at many golf courses and country clubs. There could be public or private leagues that would most likely charge dues in order to pay for the rounds of golf and allow members to compete with one another. Most golf leagues follow the handicap scoring system, as this allows for the most accurate method in determining the skills of its members. As the goal of golf is to get the lowest score, a lower handicap indicates a superior golfer. Golf leagues are extremely popular with seniors, as they typically have more time on their hands to devote to golf. Junior golf leagues are also a popular way of getting young children involved with the game from an early age.

To start a golf league, a large number of members must first be gathered. Time slots need to be found by contacting golf courses in the area and asking for back-to-back time slots for a league. Many courses have special rates for league play, including discounted greens fees or food and drinks included. A league schedule and format must be set up in order to advise members when matches are played and how the league is scored. Many courses require league fees upfront, so it would be wise to collect league dues in a timely manner in order to pay the course fees in full.

The length of a golf league’s season can differ for many different reasons. Each league’s season is generally set by the commissioner with input from the league's members. The season can differ in length due to the courses that will allow the league. If a course will only allow a league for a certain number of weeks, the league does not have a choice in how long the league season would be. The length of the season also differs depending on the type of climate that the league is present in. Leagues can vary between 10-52 weeks a year depending on the weather in the area. Most often, golf leagues are between 12-24 weeks long. Many leagues that span a large number of weeks often have a midpoint in the season that splits it into two halves and allows for more winners.

The cost of golf leagues varies depending on many different factors. The cost of a golf league can be determined by the league’s commissioner and its members. The cost will need to include the price that the course requires, as well as other options including carts, caddies, or food and drinks. The reward for winning the league also needs to be included in the price of dues for league participants. The more the course charges, as well as other expenditures the league may want or need, will increase the price that each member needs to pay. Many league memberships fall between $50-$500 for members to join, but there is not a universal price that all leagues follow since every league and its members are different.

There are many professional golf leagues present in the United States for the very best players. The Professional Golf Association Tour (PGA Tour) is the highest level golf tour in the world. This league is among the best of the best and has hefty prizes for the winners of their tournaments. Following the PGA is the LPGA, which includes the top women's golfers in the world. This tour includes 25-30 tournaments with large purses. Below the PGA Tour is the Korn Ferry Tour, which is where many male athletes start their professional golf careers. This tour includes 25-30 tournaments with relatively smaller purses. Lastly, there is the Champions Tour, which includes professional golfers over 50 years old. There are also various developmental tours around the world that feature amateurs just starting their professional careers.

Outside of North America, there are also numerous highly competitive professional leagues, such as the European Tour and the Asian Tour. Many of the top players in the world play events on both of these tours, as they feature relatively large purses.