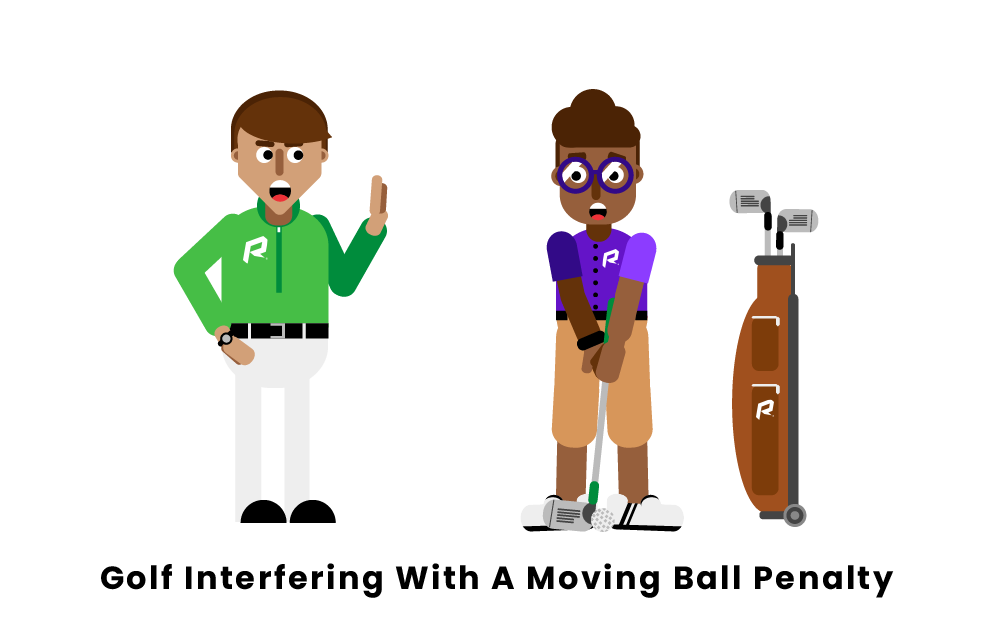 One of the most important rules of golf is that all players must be able to make strokes without fear of interference. Therefore, it is illegal for any golf player to deliberately act in order to interfere with a golf ball in motion, either by using their club or body to impede it or by using another object.

In golf, there are strict rules regarding the treatment of a ball in motion in order to ensure the game’s safety and fairness. In particular, it is forbidden for any player to interfere with a ball in motion or use any object or obstacle to impact a moving ball deliberately. According to Rule 11 of the United States Golf Association (USGA) Rules, a player is considered to have interfered with a moving ball whenever they deliberately touch a ball with their body while it is moving, such as with their hands or feet. A player is also guilty of interference if they deliberately leave a person (such as their caddie), a piece of equipment, or any other object aside from a ball marker in a location where it would be able to deflect or halt the opponent’s ball.

One notable exception to Rule 11 centers on a moving ball that has no reasonable chance of entering the hole. On occasion, a player will hit a ball and immediately be aware that it will not reach the hole, or a ball needed to tie the hole will be rolling towards it but will evidently not reach it. In these cases, it is acceptable for another player to deliberately stop the moving ball without incurring a penalty if their opponent concedes to it.

There are various rules regarding how a player whose ball is deliberately stopped or deflected by another is to replay their ball. In all cases, the ball is not to be played from the place where it lies after being deflected. Instead, the player must take relief. If the player’s deflected stroke was made from anywhere outside the putting green, there are three options for relief. First, if it is found that the ball would have come to rest outside the green, the player must drop the ball in the same area as their prior stroke. In this scenario, the previous spot would be used as a reference point, and the ball would be placed within one club-length in any direction of that point, except for directions that would place it closer to the hole. If the ball had come to rest on the green before being deflected, the player would have to place it at an estimated spot close to where it would have come to rest. If the ball would have fallen out of bounds, the player must take stroke-and-distance relief as required by the out of bounds penalty. Finally, if a player whose stroke was taking place from the putting green has their ball deflected, the ball must be placed in the previous spot, and the stroke does not count.

Players can also receive an interference penalty by moving objects or people, or altering course conditions, in order to interfere with a ball. This rule does not apply if a player is removing the flagstick, another player’s ball, or any other player equipment from the way of the moving ball.

If a player deliberately interferes with a moving ball in any way, they will receive a general penalty. A general penalty in golf is a penalty of two strokes in stroke play. This means that the player will be moved two strokes closer to or past par stroke. In match play, by contrast, the general penalty incurs an automatic loss of a hole, as match play relies upon counting up the number of holes won by each player.

Similar Penalties to Interfering with a Moving Ball

What is interfering with a moving ball in golf?

In golf, interfering with a moving ball occurs whenever a player deliberately interferes with another player’s ball while it is in motion, either by touching it with their body or deliberately placing any object, person, or equipment (aside from a ball marker) in the path of the moving ball. If a player interferes with a moving ball, the ball must be replayed, though the place where it is replayed depends upon various rules regarding where the ball was or would have landed.

What are the consequences of interfering with a moving ball in golf?

What is the rule in golf if an animal moves your ball?

In golf, if an animal is found to have moved a player’s ball, there is no penalty awarded to any player. Since animals such as geese or squirrels can commonly be found on golf courses, it is possible for them to unintentionally move or run away with a player’s ball. In these cases, if the ball cannot be recovered, the ball must be replaced.

Pages Related to Golf Interfering With A Moving Ball Penalty