How Much Do Caddies At St. Andrews Make? 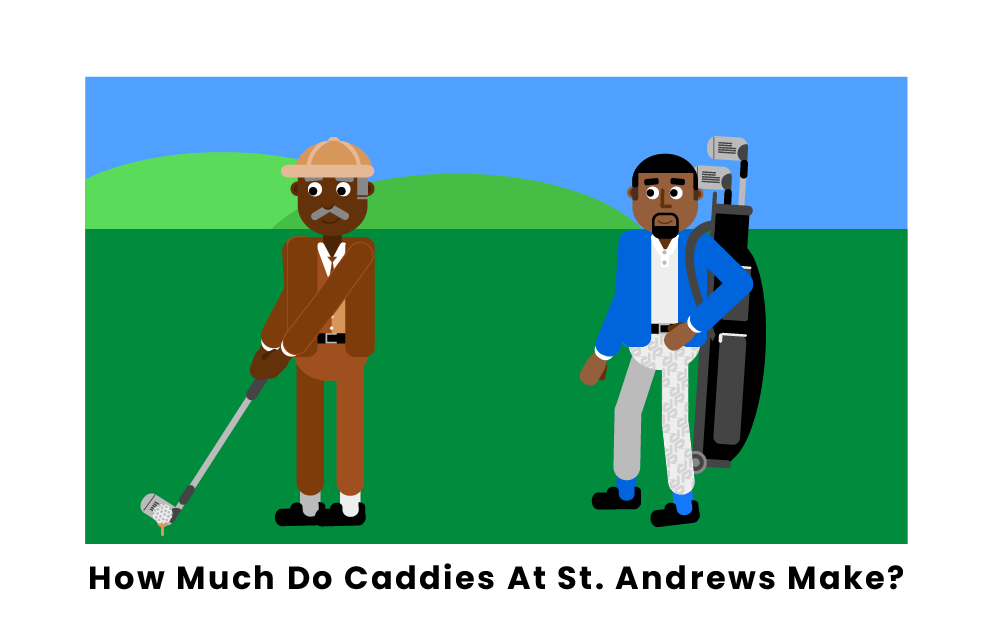 St. Andrews is one of the oldest golf courses in the world, with records of the sport being played at the links going back over 600 years. In those 600 years of play, the course at St. Andrews has also built a rich tradition of caddie service, with bagmen who have lived and breathed the course as a profession for decades. How much do the caddies at St. Andrews make for their services? Keep reading to find out!

How Much Do Caddies at St. Andrews Make?

The average pay rate for a caddie at St. Andrews comes out to around $25 an hour. The flat fee for commissioning a caddie at St. Andrews is 55 pounds sterling (around $67), with gratuity expected to be paid in addition to the caddie fee. This going rate is assumed at one caddie per player. Typically, a caddie can expect to make around $100 for one bag and one player on a four-hour round of golf.2

The salary range at Saint Andrews is highly dependent on the number of bags and rounds carried and guided by the individual caddie. The caddies at St. Andrews rely heavily on gratuity and tips from the players they service, as the work of a caddie is extremely physically taxing and requires a great deal of skill and knowledge.

How Much do Caddies Make During PGA Events at St. Andrews?

The PGA payout rate for caddies at St. Andrews is very similar to other PGA tournaments. Typically a caddie will receive 10% of the prize awarded to the number one golfer in a tournament. As the position of the golfer drops down the leaderboard, so does the amount of the prize money that the caddie receives. Typically, for finishes outside of the top 10 places, a caddie will receive about 6% of the total prize awarded.

In addition to the percentage of the winnings awarded to them, caddies will often receive an extra bonus or gratuity from the golfer they are carrying for. This range of payout is considered standard for any PGA event, and does not differ at the St. Andrews course. The payout during tournament play is entirely dependent on the amount of money being awarded to the various finishing positions of the competing golfers.

What's the Most a Caddie Has Made at St. Andrews?

The biggest recorded payout for a caddie at St. Andrews was in the 2022 British Open, and the receiving caddie of the record-setting prize was Sam Pinfold, the bagman of golfer Cam Smith. Sam Pinfold was awarded more than $210,000 after Cam Smith clinched a victory at The Open Championship at St. Andrews. The six-figure payout is, to date, the highest earnings of a caddie at the St. Andrews old course, as 2022 saw the biggest prize pool available in the links history for The Open. Cam Smith himself walked away with a striking $2.5 million, his share of the $14 million purse available at The Open.

How much should I tip a caddie at St. Andrews?

The expected gratuity for a single caddie at St. Andrews is 20 pounds sterling (roughly $24). This gratuity is the minimum recommended tip, and is often exceeded on account of the length of the round of golf, the number of bags the caddie had to carry, and the conditions faced during the time of play. In general, the longer the length of the round or the worse the conditions, the bigger your tip should be.

Pages Related to How Much Do Caddies At St. Andrews Make?