Golf101Articles5 Most Common Golf InjuriesArnold Palmer Bio And FactsDo Caddies Play Golf?Golf Scramble vs Best Ball FormatsHow Do You Add Spin With A Wedge Club In Golf?How Do You Add Spin With An Iron Club In Golf?How Does Golf Betting Work?How Does Scoring Work In Golf?How Far Can You Hit The Ball With A 3-iron In Golf?How Much Money Does A Golf Caddy Make?How To Spin A Golf Ball Backwards On The Green?How do Rankings Work in the Golf World Amateurs?Is Golf A Good Workout?Is Golf An Olympic Sport?Jack Nicklaus Bio And FactsJordan Spieth Bio And FactsPhil Mickelson Bio And FactsRory Mcilroy Bio And FactsTiger Woods Bio And FactsTop 10 Golf BooksTop 10 Golf BrandsTop 10 Golf TournamentsTop 10 Golf Video GamesTop 10 Richest GolfersTop 5 Golf MoviesWhat Are The Hardest Holes At Augusta National?What Club Is Used For Chipping In Golf?What Is A 6 6 6 Golf Tournament?What Is A Good Score In Golf?What Is The Best Grip For Playing Golf?What are the most important Golf Rules?What are the rules of golf?What is a 2 on a Par 5 in golf called?What is the 19th Hole in Golf?Where Are The Next 5 British Opens?Who Are The Richest Golfers?Who Is The Oldest Player On The Champions Tour?Why Is Golf Expensive To Play?Why Is It Called A Bunker In Golf?BasicsClubsDrillsQuestionsRulesShotsSkillsStatisticsThe Course
PreviousNext

How do Rankings Work in the Golf World Amateurs? 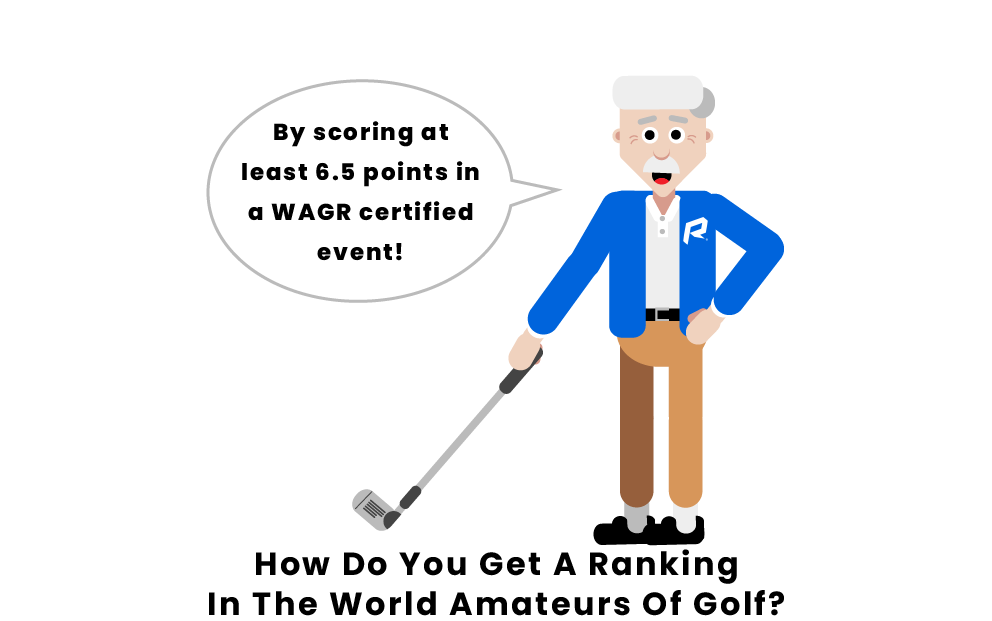 In order to get into the World Amateurs of Golf Rankings, you need to place highly in certain certified events, and score at least 6.5 points in such an event.

The World Amateur Golf Rankings (or WAGR) is a points-based system that determines who the best amateur (non-professional) golfers are in the world. There are over 10,000 WAGR-ranked golfers. Rankings are updated every Wednesday, and cover a rolling two-year period over which players can earn points.

To determine a player's ranking, the WAGR adds up the number of points a player has earned over the past 104 weeks of golf play.

Amateur golfers achieve ranking points by placing highly in certain tournaments and matches. The higher you place in a tournament, the more points you will be awarded. Points are awarded based upon the strength of the field against which you are playing (also known as the Power of the event) and the size of the field of players. A tournament with many highly-ranked amateurs will award more points per finish than an event with only a few ranked players.

To become a WAGR-ranked player, you must have at least 6.5 ranking points in an event in the past two years. Events are "aged" during that period, meaning that a result from 90 weeks in the past will be worth less than a result earned just a month ago.

The only way to earn points is by earning them at WAGR-certified events. A tournament or match of golf that is certified is known as a "counting event," because it can count towards your WAGR points total.

Counting Events are determined by the WAGR Committee, and must meet certain requirements. For instance, the average score of the winner of an event must be no higher than six strokes over par for an event to be a "counting event."

In addition, counting events must follow the Amateur Rules of Golf, meaning that any tournament with prize money included for the winner will not be a counting event, and will not award WAGR points.

Pages Related to How do Rankings Work in the Golf World Amateurs?

How Far Can You Hit The Ball With A 3-iron In Golf?How Does Scoring Work In Golf?How Much Money Does A Golf Caddy Make?
Jordan Spieth Bio And FactsIs Golf An Olympic Sport?Jack Nicklaus Bio And Facts
PreviousNext