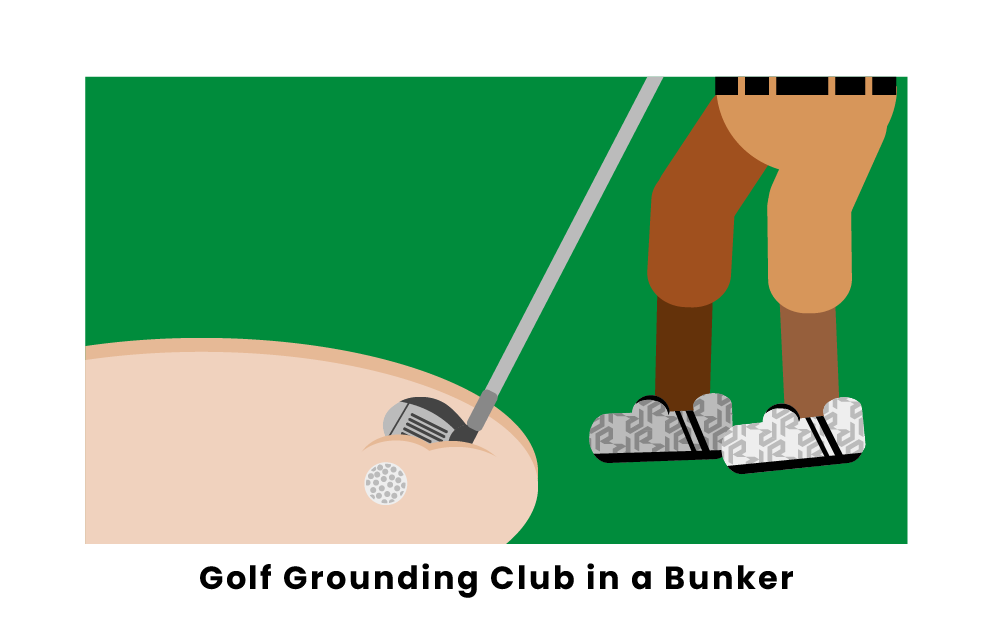 Grounding a club in the bunker is a penalty in golf for both stroke play matches and match play. The rule prohibits a golfer from grounding his club and making contact with the ground when hitting from a bunker. If the golfer makes contact or disturbs the sand in a bunker, there is a penalty awarded.

The type of punishment for grounding your club in a bunker is dependent on the type of game or match being played. If the offending player grounds their club in a bunker during a stroke-play match, they are awarded a two-stroke penalty for each instance. If the golfer is participating in match play, then grounding a club in the bunker results in losing that hole. This penalty is only called when a player is in a bunker before their shot. This rule may not be enforced when playing recreationally, but this rule is uniform in all forms of recognized league play.

In all leagues and levels of play in golf, there are varying degrees of penalties for grounding your club in a bunker. According to USGAs official rulebook 13-4, the penalty for grounding a club is a two-stroke penalty in stroke play. If the player grounds their club in a bunker during match play, the golfer is awarded a loss of the hole. This rule and penalty are uniform across all leagues and levels of the game.

Similar Penalties to Grounding Club in a Bunker

What does it mean to ground a club in a bunker in golf?

In golf, grounding your club refers to the action of a golfer’s clubhead making contact with the sand in a bunker, either in the backswing or when addressing the ball. This penalty most commonly happens among amateur golfers and is rarely seen at the professional level. It is prohibited for a player to ground their club in a bunker to ensure fair play, as grounding your club in sand helps you feel out the lie, eliminating the challenge of hitting out of a bunker.

What are the consequences of grounding your club in a bunker in golf?

The consequences for grounding your club in a bunker depend on the type of match you are playing. However, the result is the same regardless of the level of play. In match play, the penalty is loss of the hole, and in stroke play, the offender is given a two-stroke penalty.

What is a bunker in golf?

Bunkers refer to the hazards placed on a golf course that resemble sandpits. They are generally found along the fairway or guarding the green. They are commonly made up of sand and are meant to test the golfer’s skill on the course. Bunkers come in varying shapes, sizes, and depths and may also be referred to as sand traps.

Pages Related to Golf Grounding Club In A Bunker Penalty