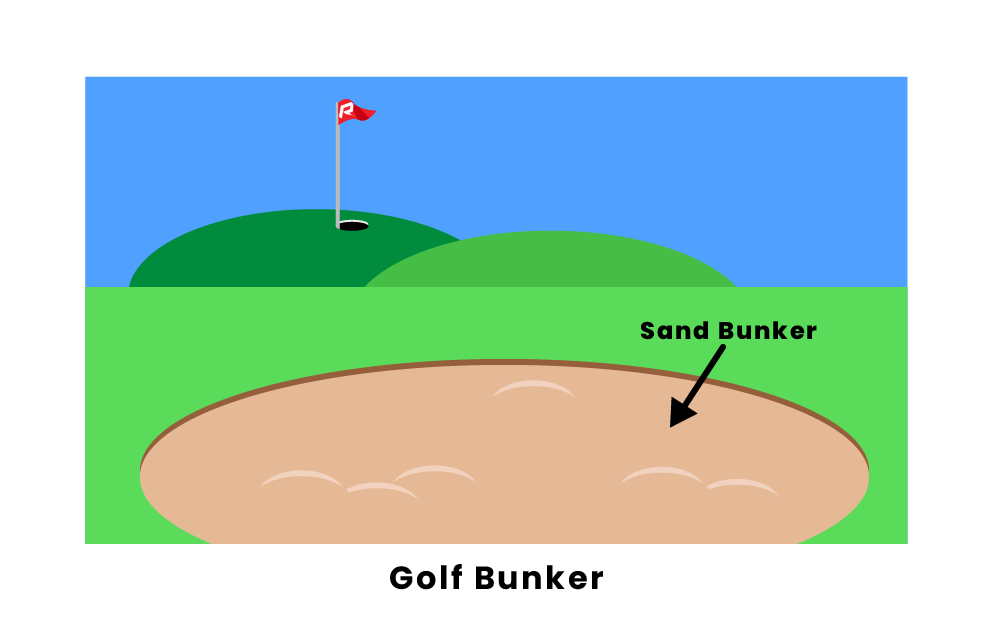 Many people who casually watch golf have heard the term “bunker” before, but what does “bunker” refer to, and what are the functions and types of bunkers on a golf course? Bunkers are one of the many types of intentionally-placed hazards on a golf course, obstacles designed to make it more challenging for golfers to reach the green. Here, we will define what a bunker is, discuss the different types of bunkers, and examine what the rules of golf say about playing around and through bunkers.

As stated in the Rules of Golf, a bunker (also sometimes called a “sand trap”) is a prepared area of the course that is filled with sand and is intended to make a hole more challenging by testing a golfer’s ability to play their ball on a sandy surface. Bunkers are most commonly large, somewhat shallow holes in the ground of the course, which are typically filled with sand or a sand-like material. There is no standard size or shape to a bunker, and as we will see below, bunkers come in many different types, based both on their general shape and their location on a hole.

The basic intent of bunkers is to provide a potential obstacle for golfers in order to make certain holes on a course more challenging. Bunkers are often steep, meaning that it can be difficult to hit a ball out of them. Additionally, the sandy surface of the bunker responds differently to clubs than grass, making it more difficult to hit a ball accurately due to the slippery sand. As a result, many golfers train themselves to hit out of bunkers, and many also buy the latest and best clubs designed to be used in bunkers, known as “sand wedges” or “sand irons.” 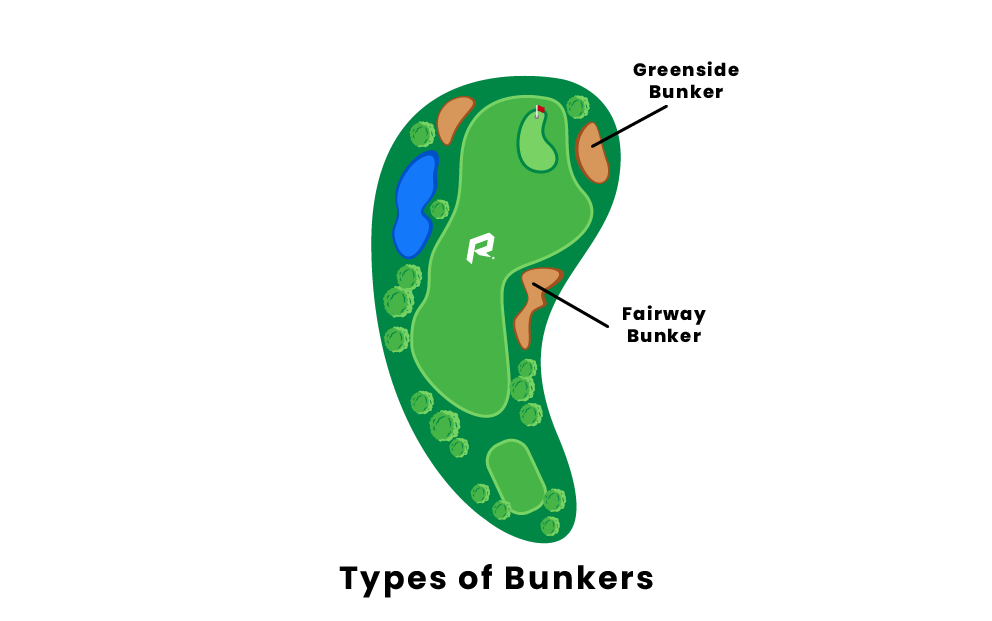 When looking at the various holes of a golf course, one can see that bunkers and sand traps come in many different shapes and sizes and are also located on different parts of a course. These categories of bunkers each have a different name and function based upon their characteristics.

The first type of bunker on a golf course is a “cross bunker.” A cross bunker is simply any bunker whose position is directly within the line of play on a hole, meaning that a golfer must somehow cross the bunker to reach the green and is likely incapable of golfing around it. Most golfers will usually attempt to golf right over a cross bunker so that they do not have to hit out of it. Cross bunkers can be located almost anywhere on a hole, in the fairway, the rough, or partially in both. They can also be almost any shape and size, but they generally tend to be wider than they are deep and are usually oriented at a perpendicular angle to the fairway.

A second type of bunker is a “greenside bunker.” Greenside bunkers are always located right beside the putting green of a hole and present a final obstacle to approach shots. Thus, they are often said to “guard the green” of a hole. Greenside bunkers can also be dangerous for golfers already on the green, as a long putt can accidentally take on over the edge and into the bunker.

The third type of bunker is called a “pot bunker.” Pot bunkers are small and round in shape but are very deep, making them hard to escape. Pot bunkers can be located anywhere on a hole but are often hollowed into small hills along the fairway. Pot bunkers are also sometimes referred to as “potholes” or “pothole bunkers” and are commonly found on links golf courses, golf courses which are located near the sea, or on high bluffs such as the original golf courses of Scotland, where the sport originated.

The final type of sand bunker is the “church pews bunker.” A church pews bunker is a long, shallow bunker that is interspersed with berms, which are level strips of grass that interrupt the sand like stripes. The name of these bunkers is derived from the similarity of appearance between the grass strips and church pews. Church pew bunkers are the rarest type of bunker on a golf course and can be found at famous golf courses such as Oakmont Country Club in Oakmont, Pennsylvania. 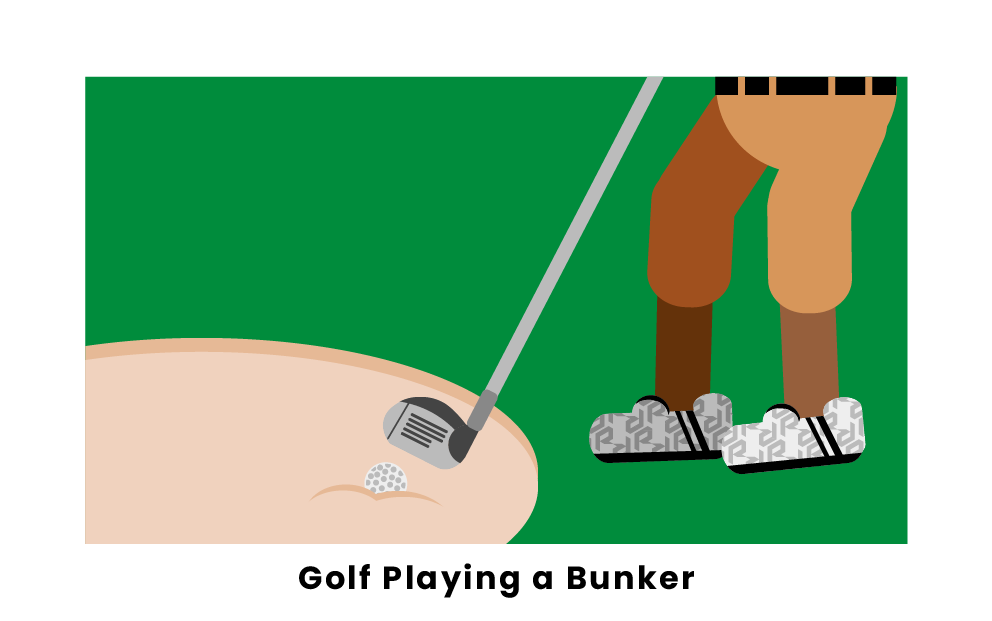 As explained in the Rules of Golf, if a player has hit their ball into a bunker, there are various procedures they must follow in order to play the bunker correctly. Firstly, golfers are permitted to remove any “loose impediments” or “movable obstructions,” such as loose sand, sticks, etc., from the way of their ball. However, the rules clearly state that golfers cannot touch the sand of a bunker with their hands to determine how loose or dense it is or to gauge their shot. Similarly, golfers cannot use their club to touch the sand of a bunker in front of their ball, during a practice swing, or during their backswing.

Certain actions are permitted in a bunker that do not violate the above rules, including digging one’s feet into the sand to get a lower and more stable stance, smoothing out the bunker in order to care for the golf course, placing clubs or other equipment inside the bunker, leaning on a club inside a bunker for balance or rest, and even striking the sand in anger or frustration. However, under the rules, if any of the above legal actions accidentally result in improving a golfer’s shot, they will receive a penalty, which results in the loss of the hole in match play or the loss of two strokes in stroke play.

Bunkers are a staple of the game of golf, and though they are often frustrating, they serve a necessary purpose by making the game more challenging and exciting. If you want to improve your golf game, it is a safe bet that bunker shots are one of the crucial skills you should aim to develop in your training, as they are a ubiquitous part of the game of golf.