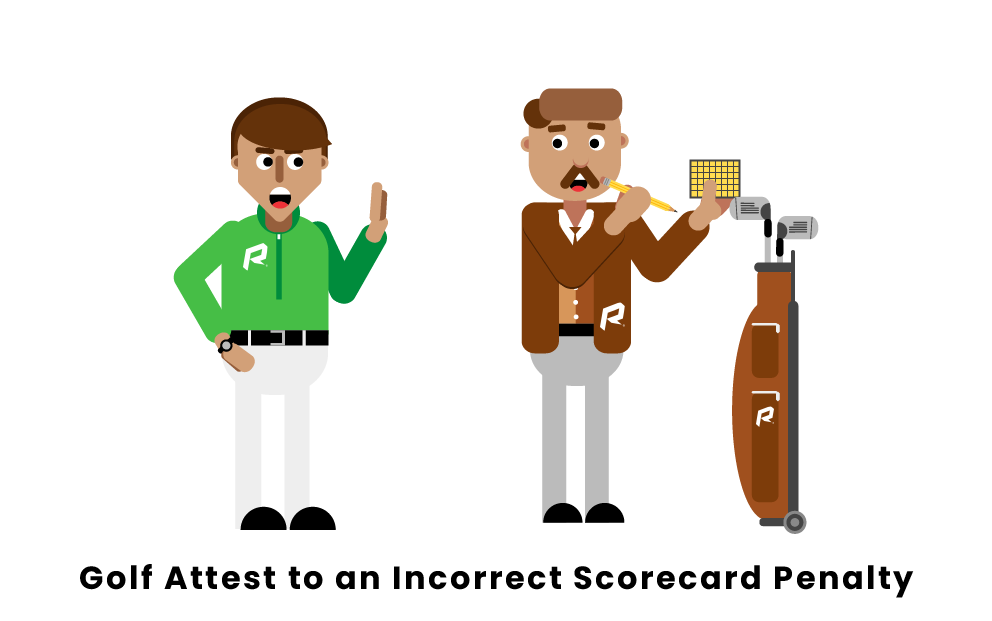 Before every round of golf, each player is given a scorecard to keep track of their score. They are also responsible for keeping track of their partner’s score on this card. After every round, both the player and the maker sign each other’s scorecard, as well as their own, and submit it to the competition committee. These scores must match.

An attest to an incorrect scorecard penalty in golf happens when a player signs and submits their scorecard to the committee incorrectly; however, there are exceptions to this rule.

This penalty only occurs after the round has been completed. In fact, most people don’t even see the penalty actually occur since the attestation of the scorecards isn’t usually shown to viewers. Even though the penalty is technically assessed after the round, its action happens during the round. This is because the scorecards are being filled out as the round is being played. Therefore, a penalty is assessed if a player marks an incorrect score on their scorecard during the round and doesn’t catch it when making revisions.

The penalty for signing an incorrect scorecard is severe. The United States Golf Association (USGA), which governs both the PGA and LPGA Tour, disqualifies players for attesting a scorecard that’s lower than their actual score. If a player signs their card with a higher score, then the penalty is self-inflicted.

The Royal and Ancient Golf Club of St Andrews (R&A), which governs all golf activities outside of the U.S. and Mexico, has very similar rules to the USGA regarding attesting an incorrect scorecard.

This penalty famously occurred at the 1968 Masters with Roberto De Vicenzo, in which he signed his final round scorecard as a 66 instead of his actual score of a 65. As a result, De Vincenzo lost by a single stroke to Bob Goalby.

Similar Penalties to Attesting to an Incorrect Scorecard

Who signs your scorecard in golf?

Two players sign a scorecard in golf. First and foremost, the player who played the round signs their own scorecard as well as their partners. A player is considered always to be responsible for keeping track of their score. The other person who signs the card is the “maker,” better known as the playing partner. They also keep track of a player’s score and must approve any changes to the player’s scorecard.

What is the penalty for attesting to an incorrect scorecard?

How do you keep score in golf?

The score in golf is tracked on what’s called a “scorecard.” A player receives a scorecard before every round of golf, which labels all the holes as well as the score for par on the holes. Two players keep track of an individual’s score during a round, and both the player and their playing partner should keep track of their score on each other's scorecards.

Pages Related to Golf Attest To An Incorrect Scorecard Penalty